Via Alpina 3: Surenenpass and Engleberg

In Part 1 of this account, we outlined the project and covered our first two days, hiking from Mels to Elm (and taking transport to Braunwald). Part 2 took us on to Klausenpass and to Altdorf, home of William Tell.

We resume the tale after taking a nice Thanksgiving break, with

We started this day with a fairly lengthy bus ride which took us a lot of places before dropping us at the base of a very small cable car, where we were to ring the mid-station when ready to go. Happily some other hikers with more German were there and got it all going. At the mid-station we paid for the trip, and continued on to the top at Brusti, about 5200'. That still left us a more than adequate 2500'+ climb to the Surenenpass at just over 7500'.
With the day heating up right from the start (did it ever cool off?), we were happy to skip the climb from 1500' Altdorf, and to jump right into the alpine scenery and alpine temperatures.
Despite the remoteness of the trail and the seemingly little-used lift, there were a fair number of people starting off about the same time as we did, though nothing like the swarms we'd seen on the TMB.

We climbed steadily, but mostly fairly comfortably, stopping of course for the usual snacks along the way. Though clouds flirted with the mountains, it remained very warm, and views remained worth the price of admission.

We stopped for lunch before the final climb, feeling the need for fortification to tackle the last bit. Based on the number of people who joined us there, we'd found the right time and place for a break.

We reached the pass at last about 1 p.m., and gazed into some rugged terrain, dominated by the black face of the Titlis. 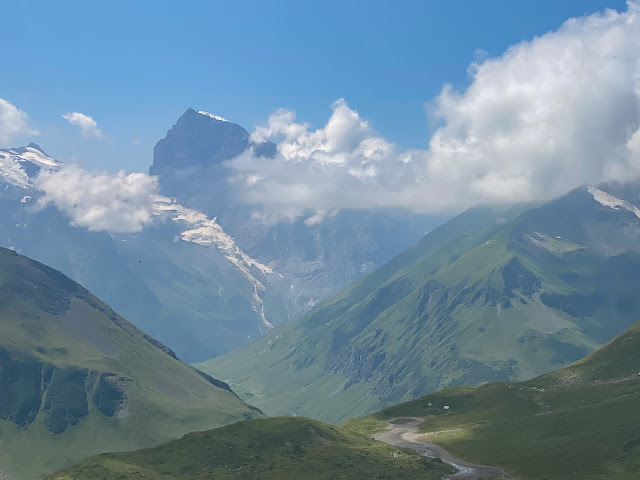 Our descent gave us two options, the high route, with lift, and the low route, with bus. The scenery made it a strong option to stay high, but there was some push-back about an extra 800' of climbing, which is not trivial. We stayed took the high road anyway, and reserved the right to whine about it.
Finally reached the cable car at Furstenalp, and dropped into the valley, where we caught a bus to our hotel. 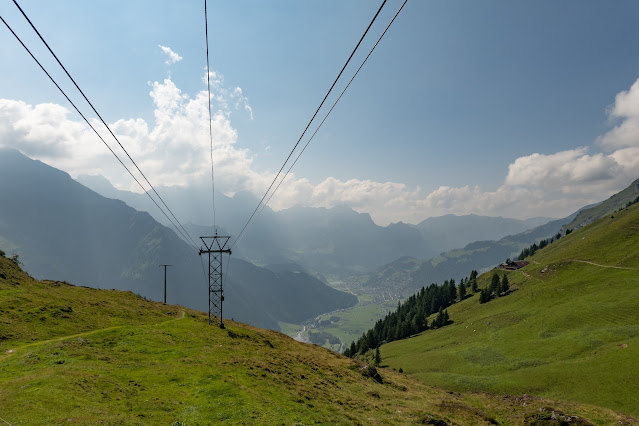 Our next two days were layovers in Engleberg, which has a ton of great scenery and other touristic opportunities, in some of which we indulged, while also taking plenty of rest time. A quick study of the weather forecast told us that our first day would be dedicated to taking the Titlis lift to somewhere around 10,000' (just below the summit of the peak), in order to catch views which might not be available another day.
We made as early a start as was consistent with breakfast, to beat the worst of the crowds at one of the biggest attractions of the region. The ride up was in three stages (or maybe it was four?), up to the Trubsee, then higher, then the final stage in the first rotating cable car in Europe (the one we rode out of Courmayeur was built more recently, but clearly by the same outfit).
The cable car has a rotating passenger area inside the suspended frame, and makes one full rotation in the five-minute ride to the summit, so it's not like you're spinning!
The top is (like so many Swiss mountaintops) a combination of absurd touristic activities and breathtaking views.
Once there, we went ahead and indulged in such of the touristic experiences as were free (aside from the cable car fare; expect to pay around $50 depending on exchange rates). That included the requisite thrill walk, in this case a suspension bridge extremely high above steep ravines, crags, and finally a glacier.


Some of the panoramic views from the summit building.

When we tired of the heights (and/or people started to get cold), we dropped back to the Trubsee and strolled around the lake, delighting in the interesting and original playgrounds that were stationed about every 1/3 mile to entertain the children, as well as in the calm water and reflections.

Since we only had snacks with us, not lunch, we soon headed back to town and the R&R we needed.
Engleberg Day 1 stats: about 3 miles, pretty flat, including walking around town after lunch.

Our second layover day we had big plans for a hike, but the weather, as feared, moved in and made it seem both pointless and miserable to do an 8-mile alpine walk.
Instead, we did some exploring around town between showers, and visited the historic monastery, which has a beautiful garden and a lovely church. 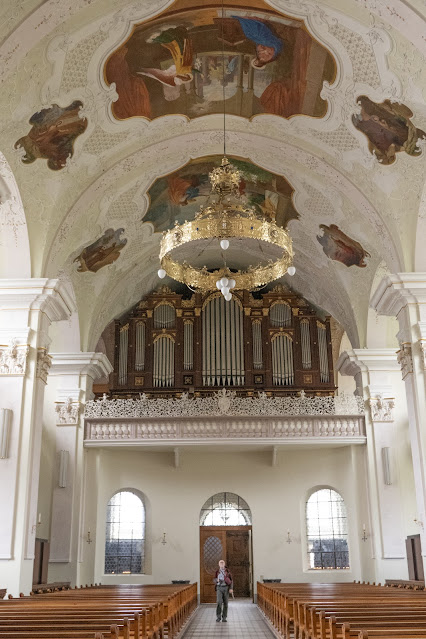 Engleberg Day 2 stats: Maybe a mile and a half? Total rest day!
Up next: Jochpass to Engslenalp, and on to Meringen.
Here's the whole series:
In Part 1 of this account, we outlined the project (hiking roughly 1/3 of the Via Alpina across Switzerland with Tom, Carol, Bob, and Diane), and covered our first two days, hiking from Mels to Elm (and taking transport to Braunwald). Part 2 took us on to Klausenpass and to Altdorf, home of William Tell. In Part 3 we climbed over the Surenenpass and enjoyed rest days in Engleberg. Part 4 took us over the next pass or two to Meiringen, while Part 5 went on to Grindelwald and an excursion to a high mountain hut. Part 6 finished the linear journey. In the final post, we'll do some hikes around Lauterbrunnen and visit a cool outdoor museum.
©Rebecca M. Douglass, 2022
As always, please ask permission to use any photos or text. Link-backs appreciated.
Don't miss a post--click the "Follow-it" link below!
hiking photos Switzerland Via Alpina