Via Alpina 2: Braunwald to Altdorf

In Part 1 of this account, we outlined the project and covered our first two days, hiking from Mels to Elm (and taking transport to Braunwald). One nice feature of this hike, like many in Switzerland, is that you can often shorten or ease hikes by using buses, trains, and lifts to cut out extra mileage or hills (up or down) that are just too long, steep, and/or tedious, and we did so whenever possible.

Thus our third morning found us enjoying the stunning views from out hotel in Braunwald, and preparing for a much easier day.

A hearty breakfast sent us off in a good mood, and since we'd dealt with the climbing yesterday (mostly on the funicular), we had a pleasant walk with only minor ups and downs out of the village and across open pasturelands with views all the way. 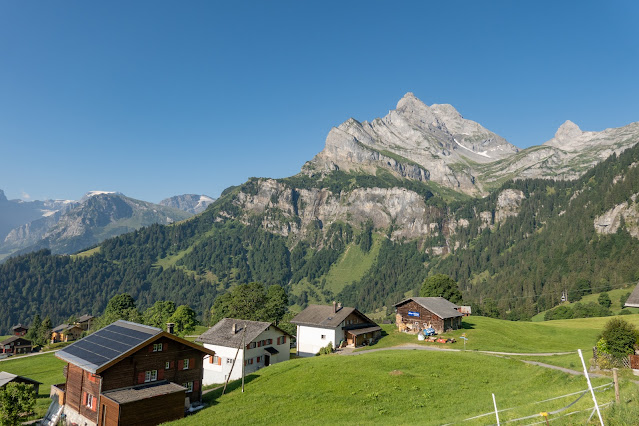 One thing the Foopass is famed for is the geology, where the bends and twists of a landscape deformed by the powerful forces of plate tectonics is on show. That remains true as you continue on across Switzerland, as in this cliff face that shows a 90º bend in the rocks in one layer, topped by another that appears much less deformed.
Eventually we had to descend, dropping down into the valley of the Fotschbach river to Urnerboden.

Here we had another chance to pick up some groceries--and grabbed a bus to carry us up the last two or three miles to the Klaussenpass, as afternoon temperatures climbed up over 80.

Views from the trail would have been amazing, if we could have seen them for the sweat dripping in our eyes. Views from the bus were just as good and less sweaty, if harder to photograph.

Getting to our hotels fairly early had the added advantage of allowing laundry time to dry. I made full use of the cross-ventilation in my corner room, getting things largely dry before afternoon thunderstorms forced me to close the windows.
Day 3 Stats: 8 miles, approx. 1140' up with nearly as much descent.

The next morning brought cooler temperatures, wet grassy fields, and skies that never quite cleared.

From Klaussenpass we had two options for route, high and low. While we usually chose the high route, on this day we went low, for the sake of some waterfalls that promised good photography. That also meant a day with minimal climbing, though a substantial drop.

We dropped steeply down to the collection of charming chalets that is Asch, a village dominated by the roaring Staubifall. 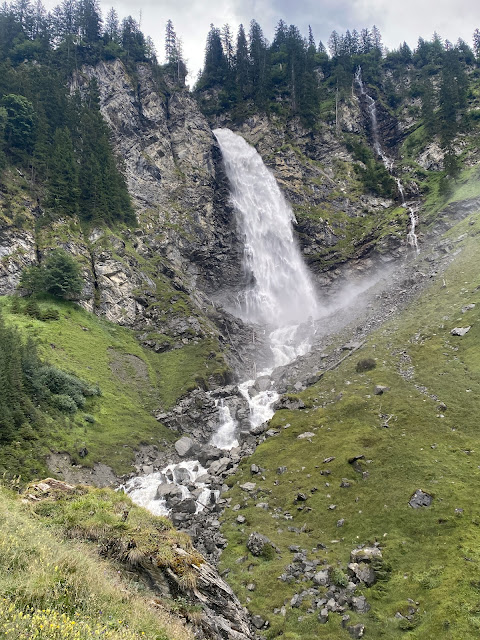 After a couple of us climbed up for a closer look at the falls, we continued down the road. We met a local couple out for their morning walk, and in their limited English (and our even more limited German), they managed to convey the idea that there was a big rock blocking the trail ahead. Since the man said he'd managed to get by it, we declined to worry and continued on. In a short way, we found that the heavy storms of the night before had done their work all too well, as mud covered the road in two or three places.
We never did find the big boulder, as signs a little farther on directed us to cross the stream and follow the road down into the village of Unterschachen, where we once again grabbed a bus to shorten the hike.
This time we had another reason to shorten the hike (besides heat, which was less horrid after the storms, or laziness, which was becoming chronic): we wanted to visit the William Tell museum in Burglen, the alleged hometown of the alleged hero of Swiss independence.
Though the museum's exhibits were limited, and largely about the many forms the story has taken in art and literature, there is an excellent film that recounts the story--then dives into both the historicity (or lack thereof) and some of the possible moral implications of having Tell as the national hero. The short version: No such person. Nor do the dates adhered to in Uri canton for the meeting of leaders of three cantons that is considered the founding of Switzerland (over 1000 years ago!) match those of the actual document signed at that meeting (which no one named Tell apparently attended). It's still a great story, though the bit about him lying in wait for the evil overlord and shooting him from hiding goes against our sense of fair play (however sensible it may have been).

From the museum we followed the "William Tell trail" on through town and down to Altdorf. Signs along the way repeated most of what we'd heard in the movie, but with better maps.

Walking between the two towns, we saw perhaps the best example yet of using firewood to insulate the home. I do wonder what happens when the level of wood drops, leaving the house uninsulated while the winter rages on.

While Burglen was a traditional town with lots of old buildings, Altdorf, or the part of it where we stayed, was more mixed, with new and old scattered together, apart from the main town square, and the block with our hotel had a somewhat more industrial feel. This was perhaps my least favorite town and lodging; though the hotel was comfortable it lacked character.

I wasn't wild about Altdorf, but was happy to find a grocery store. After two nights of restaurant dining, we enjoyed our more rapid (and cheaper) route to calories at the end of the day, and called it a night. Day 5 would be a much more strenuous day.
Day 4 stats: 6.25 miles, 165' of climbing, 3160' of descending.
Up next: over the Surenenpass and into the heart of the Swiss Alps.
Here's the whole series:
In Part 1 of this account, we outlined the project (hiking roughly 1/3 of the Via Alpina across Switzerland with Tom, Carol, Bob, and Diane), and covered our first two days, hiking from Mels to Elm (and taking transport to Braunwald). Part 2 took us on to Klausenpass and to Altdorf, home of William Tell. In Part 3 we climbed over the Surenenpass and enjoyed rest days in Engleberg. Part 4 took us over the next pass or two to Meiringen, while Part 5 went on to Grindelwald and an excursion to a high mountain hut. Part 6 finished the linear journey. In the final post, we'll do some hikes around Lauterbrunnen and visit a cool outdoor museum.
©Rebecca M. Douglass, 2022
As always, please ask permission to use any photos or text. Link-backs appreciated.
Don't miss a post--click the "Follow-it" link below!
Alps hiking photos Switzerland travel Via Alpina