When last seen, our report of the summer's adventures had us hiking and lazing in Saas Fee, Switzerland. On July 19, we upped stakes and headed to Mels to be ready to hike on the 20th. There we were joined by Bob and Diane, bringing our party to 5.

The night in Mels was far from ideal. The town is attractive enough, but just about everything was closed--happily, the grocery was open, so we were able to buy the needful for a picnic dinner--and it was hot. Really hot, and a little humid, making us all too aware that Europe isn't big on air conditioning.

We had hoped to do some exploring, perhaps visit Sargans Castle--an easy walk from our hotel--but the intense heat and sunshine scotched that idea. We spent the afternoon trying not to move too much as the thermometer climbed into the high 90s (mid-30s C). Inside my room.

The hotel-keeper was really nice, and took away the warm comforters and left us with sheets instead, but it wasn't a night even to use a sheet. My altimeter showed that it was 82º F when I got up at six a.m. Our very kind hotel keeper also saw to it that we got breakfast early--I think at 6:30--so that we could start hiking as early as possible.

The morning weather promised to be interesting, but also to be hot. We were out early, but not early enough--if there is such a thing when the overnight low is 82! Our hike, however, was only just under 7 miles, though it had a stiff climb of over 2100'.
The climb began right away, as did the sweating. We stopped at one of the ubiquitous open fountains on the upper edge of town and wet hats, heads, and whatever else seemed like it might help.
Essentially, once we had climbed the ridge out of town, our route traversed well above the bottom of the long Weisstannental valley. A little elevation brought some relief from the heat, and a little more access to breezes, but the hike remained a hot and sticky affair.

This stretch of the Via Alpina was less scenic than most of our other hikes. It wasn't bad, and would have been a pleasant walk without the heat and humidity, but there was little striking about it. We were happy to reach our hotel by noon, and very relieved that the hotel keeper was about and willing to let us check in early. Our bags wouldn't be there for a couple of hours, but we were able to get our boots off, eat our trail lunches, and enjoy a beer in the shade outside. All of this was negotiated with my limited French, matched by the equally limited French of the hotelier, who spoke no English--proof, if required, that the Via Alpina hasn't achieved the popularity of the Tour de Mt. Blanc.
Survival ensured, we watched with interest as the humidity built into storm clouds, and by mid-afternoon were enjoying a glorious downpour, complete with thunder and lightning. That improved conditions quite a lot, enough that we went out to explore the "town" of Weisstannen a bit when the clouds blew away again before sunset.
Actually, there was one source of at least some kinds of food: the first vending machine I ever saw that sold locally-made cheese, jams, and other artisanal products. 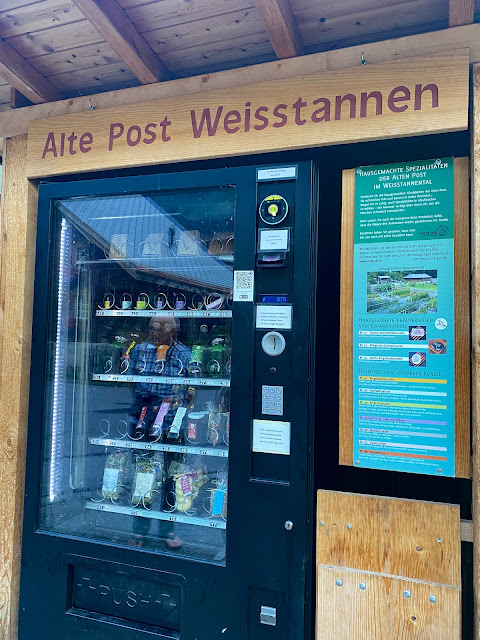 This day was meant to be one of the scenic highlights (of the early part of the hike, anyway), but as it turned out, we saw very little of the Foopass (pronounce FOE-pass) or the surrounding mountains. While the fog and clouds made it much less hot than the previous day, it wasn't exactly cold, and humidity made it a day for sweating profusely. Jackets were then required at rest stops.
In another triumph of communication, I managed to negotiate with the hotel people to give us rides to the end of the road, cutting about four miles off the hike--a good thing, in this case, and the more so as it was neither scenic nor pleasant hiking in the valley under the heavy clouds. Things were more interesting as we started climbing soon after the end of the road.
I had kind of hoped we might climb above the fog and clouds, but no such luck--we merely climbed right into them. Craggy canyon walls next to us suggested scenic possibilities that will, alas, remain forever in someone else's photos.

When you can't enjoy the big scenery, you look around and see what there is to enjoy. On this day, the signature small delight was... salamanders. There were a lot of them, once we got used to looking. Some were fairly large, others were tiny, but all were black and walked with a strange gait that made us laugh.
The misty day had its own special beauty as well, and we enjoyed having the trail nearly to ourselves, encountering only one other group going our way, and none the other way. There were, of course, cows.


Reaching the pass just after noon pretty well destroyed hopes of either getting above the clouds or having them burn off. It was breezy there, so we dropped a little below to eat lunch. The sun flirted with the idea of shining through the clouds, but ultimately decided against such profligate behavior.
As we dropped into the valley of Elm, we did finally experience some clearing of the weather, at least enough to see distant waterfalls and eventually the village below us. This represented the end of the day's hiking, more or less. We stocked up at the grocery and caught a bus, to the train, to the funicular, which would raise us to Braunwald high above the valley.
For the purists, this isn't the way the Via Alpina actually goes. If we had been doing the whole thing, we'd have stayed in Elm and hiked another very steep and long pass the next day. We cherry-picked a bit, and used the wonderful Swiss transportation system!

When we got off the funicular in Braunwald, we probably should have taken one of the little tiny truck things that ran around the car-free village serving as taxis. Instead, we did the 15-20 minute walk to our hotel at the top of the village (we didn't realize how far up that was, either!), feeling only relief at finally reaching our Hotel Alexander's Todiblick.
Again, there being no real options, we ate at the hotel. The food was undeniably very good, but we suffered through the requisite long waits for each course, being mostly interested in returning to our rooms and resting.
The rooms were comfortable, if not large, and the hotel provided a generous fruit basket in each room, from which we were able to fill some of our desire for more fruits and veggies in our diets. Once I chased a cricket outside, I enjoyed a peaceful night, well-earned.
Day 2 stats: 9.8 miles, about 3200' up, 3900' down. A day to make the feet and legs tired!
Next week: Braunwald to Altdorf, and the story of William Tell!
Here's the whole series:
In Part 1 of this account, we outlined the project (hiking roughly 1/3 of the Via Alpina across Switzerland with Tom, Carol, Bob, and Diane), and covered our first two days, hiking from Mels to Elm (and taking transport to Braunwald). Part 2 took us on to Klausenpass and to Altdorf, home of William Tell. In Part 3 we climbed over the Surenenpass and enjoyed rest days in Engleberg. Part 4 took us over the next pass or two to Meiringen, while Part 5 went on to Grindelwald and an excursion to a high mountain hut. Part 6 finished the linear journey. In the final post, we'll do some hikes around Lauterbrunnen and visit a cool outdoor museum.