This is a three-night backpack trip I did with my brother-in-law back in September, in Washington State's Alpine Lakes Wilderness. I had meant to do an additional two nights but that was when the Bolt Creek fire blew up and closed US 2 over the mountains--where I had intended to come out. I of course didn't know that at the time, but the sudden increase in smoke where we were and still more to the north where I wanted to go meant retreat was the right option.

The hike in from the trailhead at Tucquala meadows (a good 3 hours from Seattle, more if the road hasn't been graded recently, but always fully passable to a Prius) to Robin lake is about 6 1/2 miles--and better than 3000' up. It's a stiff hike, in other words, with a full pack on a hot day (remember, I was carrying food for 5 days, and we weren't able to start hiking until late morning). The first several miles of trail is well-graded and climbs gradually past Hyas Lake,  then begins a more obvious ascent towards Deception Pass.
When you turn off the Deception Pass trail toward Tuck and Robin, things get gnarlier. The trail climbs about 1200' in a mile, and is narrow and sometimes requires climbing over logs and roots.
If we thought the trail to Tuck Lake was steep and challenging, that was because we hadn't yet seen the "trail" to Robin Lakes. It's actually kind of amazing that we could lose that track so often, because I'll bet there are at least 20 people at that lake every night (we were there on a Tuesday and were aware of at least 5 other parties), so they have tramped out a pretty good trail (of course, many of those other people also wandered around a fair bit, creating the false leads we followed too often). That last 3/4 of a mile (and 1000') from Tuck to Robin Lakes took us nearly 2 hours of route-finding and wheezing our way uphill very slowly.

In the end we topped out the ridge above the lake basin--Robin Lakes is plural, a pair of lakes with a substantial isthmus between. We had to drop a hundred feet to lake level, then find a camp.
The rewards were totally worth the price of admission. It felt like I was back in the Sierra, with lots of granite and some big peaks to admire.

It's hard to narrow down the photos, as the changing light constantly changed the view out over lower Robin Lake. As the sun set, we captured some magical moments.

We were aware even then that there were fires burning in several places in the Washington Cascades, casting a yellow-orange haze over the evening light.

It's hard to know where to stop with these photos.

The evening was nice. The morning brought the real money shot, the sunrise moment we'd come for. 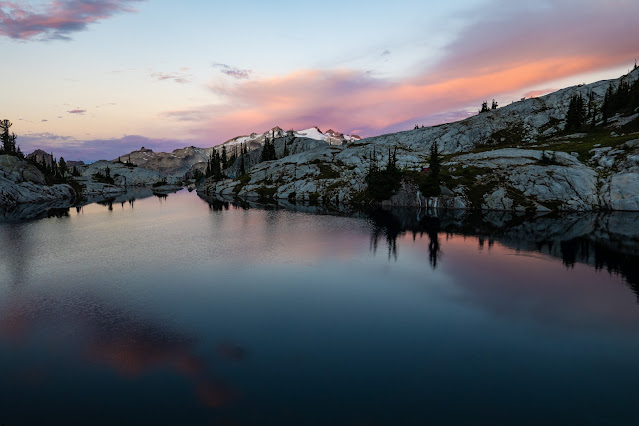 When the photography ran thin for me (sooner than for my brother-in-law; he's a professional), I took time to harvest some of the mountain blueberries that make up many of my fondest memories of hiking the Cascades 30 years ago.

Eventually we finished breakfast and packed up, and braced ourselves for the 2200' descent to the Deception Pass trail so that we could go on to Marmot Lake. We had some thought of continuing above Marmot to Jade lake, but the ageing bodies had something to say about that. Instead, we found a hidden camp at Marmot Lake, avoiding the scene at the main camping area, and settled in for an afternoon nap.

There wasn't a lot of photography on that hike, though there were blueberries to be snagged along the way. It also wasn't a short stroll. We covered 7 miles, over 1440' of climbing and, the real destroyer, 2740' of mostly steep, often very steep, descent. The idea of another mile or so with a climb much like that between Tuck and Robin convinced us we weren't dragging our packs up there.

This was the big destination, though I'm not sneezing at Robin Lakes (because we camped there, I actually feel like it was the best place). We made an early start to climb first to Jade Lake and then to Dip Top Gap.
Working hard to beat the heat, we topped out the first climb about 8:40 a.m., with the light still full of early-morning warmth.
Washington doesn't have many true glacial-milk lakes. Jade Lake is a striking example, as the unnamed glacier between the lake and Dip Top gap continues to send down the silt that gives the lake its distinctive color.

First we had to climb around to the left to get into the gully. That had some fun bits but was mostly trail. ("Fun bits" is of course hiker code for good places to hurt yourself.)

Our early start actually worked against us on the climb--the surface of the glacier was still very icy, making it harder for our short spikes to get a good bite. About halfway up the steep bit we realized it was crazy to be there, and moved to the rocks on the left side of the gully (right in the photo below). I returned to the ice above the steep slope, but Tom's spikes were less effective than mine (lighter, too, on the other hand) and he stuck to the rocks.

It was also becoming clear that the smoke was getting thicker to the north. We attributed this to a change in wind direction or similar. (We were wrong.) 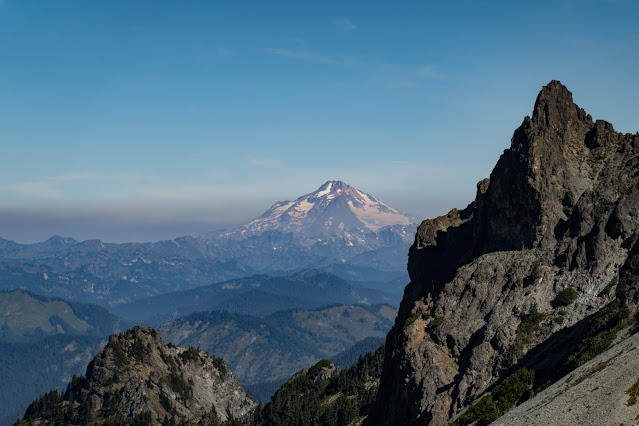 Once at the gap, we got the view we'd come for--Pea Soup Lake and Mt. Daniel, up close and personal.

We were in no hurry, and once back down to where there was running water, we stopped to filter and take a little break.
We did eventually make it back to camp, after a stop to stock up on blueberries for breakfast. This day was strenuous with a great deal of off-trail or semi-trail hiking, but not bad--6 miles and 2300', then back to our camp with enough privacy for me to take a quick dip in the lake.

This was the morning when we had planned to part ways. Tom would go back to the trailhead and drive my car back to Seattle, while I continued north on the PCT. We knew even before we got up that our plans might need to change. The smell of smoke was strong--not a good sign.
The smoky air hurt our eyes and throats, but even so I took a little convincing that this wasn't going to get better with a little change of wind direction. In fact, Tom used his Garmin In-Reach Mini to communicate with his wife, who still had no info on the new fire, but could tell us that the winds would stay the way they were and that smoke levels were beyond unhealthy throughout the Alpine Lakes. Sad but resigned, I hiked out with two spare days of food in my pack.

Take a look back at that first photo in this report (I know, that was a very long way back), to see just how bad the smoke was. The photo below is taken at pretty much the same spot. 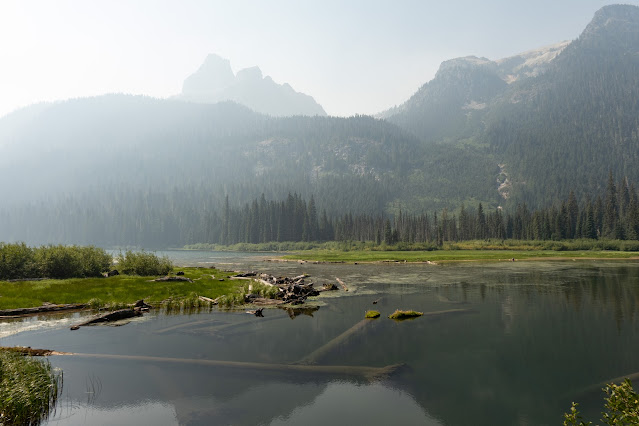 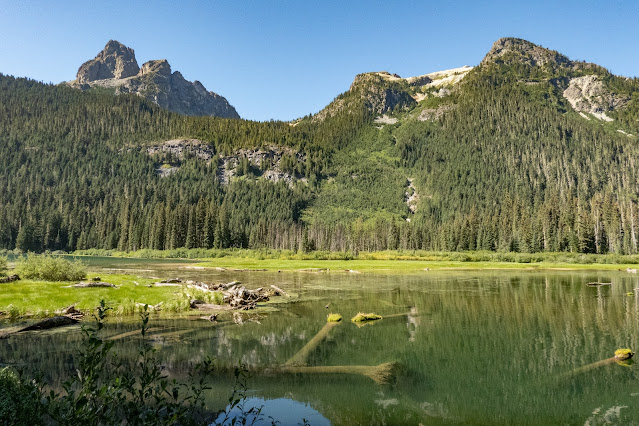 It was a huge relief to reach the car and be able to filter air through the vent system for the drive home to Seattle--where we found the air quality at least as bad, locking us all down in our homes for a couple of days until we finally got rain.

In the end, we weren't sorry not to be hiking from Jade lake. The exit hike was 9 miles, with about 2300' of descending (and a very modest climb in the first third). We knocked it out in a hurry, and I distracted myself from my discomfort by plotting my next murder--murder mystery, that is. With luck, I'll be sharing that book with you by the end of the year!
Burgers and fries at the Brick Saloon in Roslyn for a late Second Lunch went a long way toward helping us recover.
All in all, aside from the smoke, it was a fantastic trip, and hard to beat scenically. The steepness of the climbs and occasional scrambles means this isn't a trip for everyone, though. We aren't young, but we are fit, and every day of this hike left us beat to the socks.
©Rebecca M. Douglass, 2022
As always, please ask permission to use any photos or text. Link-backs appreciated.
Don't miss a post--click the "Follow-it" link below!