The earlier reports on my trip to Scotland are here and here. I left you with just one more day to hike on the JOG, but it was the longest day.

I started this day back at Keiss Harbour, this time leaving from the other end of the (very small) harbour area and heading north. Happily, the wind cooperated once more, staying mostly out of my face for a hike through sun, wind, and drizzle. My hiking partner was still feeling a bit gimpy, so again met me at some of the more accessible highlights, as well as the end of the trail.
One of the first things I encountered was Keiss Castle, old and new. The old castle was built in the 1600s, and apparently didn't last long. The new one (Keiss House) was built in 1755, and is privately owned. I'm not sure who actually owns all the ruins on the headlands!

The next cool thing was the Nybster Broch. Seeing this on the itinerary for the day had sent me to the internet (one advantage of staying in hotels!) and I learned that brochs are iron-age ruins. The round domes (or, as in this case, the pit at the base) can be found all over northern and western Scotland, the Orkney and Shetland Islands. Brochs were dwellings and/or ceremonial structures built and used from about 500 BCE to 1000 CE. This broch at Nybster was excavated in 1900. There is a monument to the archaeologist who uncovered it that is rather more dramatic (but far less significant) than the ruins themselves.

The broch's remains reminded me very much of the kivas of the SW United States, and there may be some shared religious significance. I suspect that the main shared influence is the architecture of a land with very few trees!

From the Nybster Broch I continued, alternating rugged coastline with broad pasture lands, with some deep geos (a geo is an eroded gap in the cliff, see below) forcing long detours inland.


Continuing on, I reached Bucholly Castle, which is in danger of falling off its perch soon.

One of the things I could never get enough of was the rock walls, both of old structures and dividing fields, and their coatings of lichens. 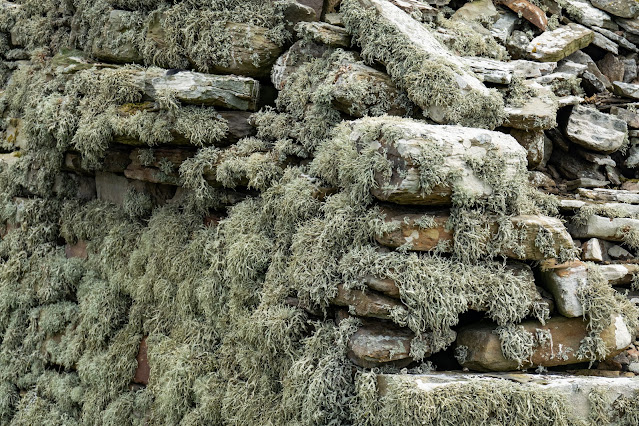 Thanks to my support vehicle, I managed to get my lunch before waves of drizzle began to move in on the wind. Happily, it was never thick enough to obscure the views I'd come for. I accepted a 3/4 mile lift to avoid a road walk around a portion of the trail that has eroded to the point the landowner has closed it.

I reached the Duncansby Head lighthouse--another by an uncle of Robert Louis Stevenson--around 3 p.m., after some 11 miles, with a couple yet to go. Fortunately, the rain never developed into anything particularly wetting. It is also perhaps fortunate that I missed connecting with Vince, my hiking partner, at the lighthouse--any temptation to call it a day was removed.

At this point the north-bound trail turns hard left and goes west to the end, the head dropping gradually down until you are walking alongside the beach. 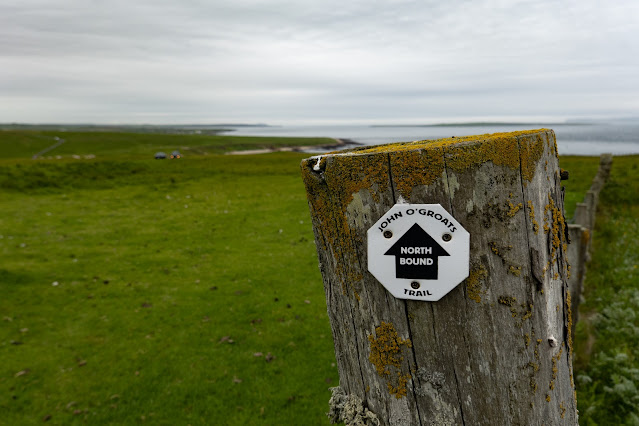 That happy/sad moment when you reach the end of the trail. Even as short a section as I did of the JOG, even spending nights in hotels and dayhiking the sections, it felt like an ending. It also felt like a zoo. After days on the trail where meeting a single other hiker or dogwalker was a big deal, to walk into first the busy Duncansby Head and then the still busier John O'Groats waterfront was a bit of a shock.

After 13 1/2 miles, and being slightly damp, I appreciated a quick lift back to the hotel, followed by a large dinner an a pint. Most nights I bought a half, but this one was worth celebrating!

The days after: return to Edinburgh

The next day after ending the hike, Vince and I drove back to Edinburgh, where we shared one last dinner and parted ways. He went to join his wife for further travels, and I went to spend a few days hiking in the West Highlands--my next post. Here are a few highlights from Edinburgh. We walked the Royal Mile (less than a mile), and the next day I climbed Calton Hill and up to Arthur's Seat.

At this point, I realized that I was ill, and in fact tested positive for COVID. Happily, I wasn't very sick, and was conveniently on my way to spend 4 days totally solo in a cabin in Glencoe.
Up next week: Glencoe hikes, and a visit with author Jemima Pett in Southampton!