Okay, so I'm a little late. It's still Friday!

Days 3 and 4 of my John O'Groats trail hike. For the start of the trip, see last Friday's post.

Strictly speaking, this should have been Whaligo to Wick, a nearly 12 mile hike by the time we would add on the distance to our hotel. We opted to cut it a little short in the interests of time and preserving my hiking partner's increasingly painful knee. Our taxi driver in fact took us to a start point that was only about a mile up the coast from Whaligo, so we still had a nearly 10 1/2 mile hike!
We began at an old farmstead labeled on the map as the Mains of Ulbster. Though the house appeared abandoned, the farm is being worked, and we followed the farmer in his little golf-cart farm vehicle down the road to our start.

Not all flowers are benign. The national symbol, the thistle, is definitely prickly and uncomfortable to brush against, though beautiful and displaying the sort of toughness the landscape requires. 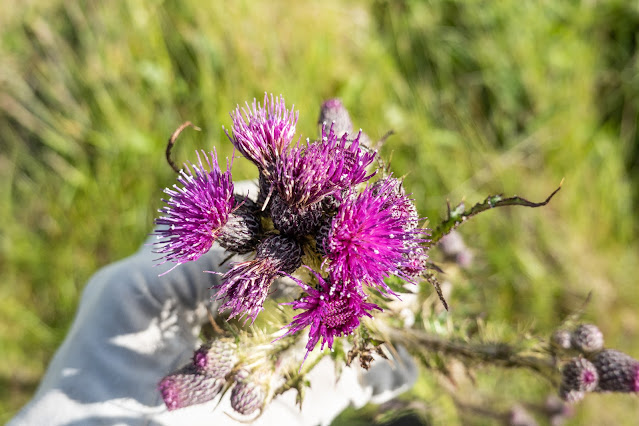 Much of the route, until the last day or two, looked more or less southeast, not across the North Sea but towards the rest of Scotland, across the giant bay that leads to Inverness. These perhaps somewhat shallower waters have lent themselves to the search for energy, in multiple forms.

By late morning the wind was really picking up, and clouds moving in. We could see rain shafts out over the water.

We were prepared for weather, and pushed on to one of the big attractions: Needle Eye Rock.

Moments after I took the above photo, in apparently benign conditions (aside from a wind that was strong enough I took that shot from my knees), the skies opened. Rain driven by 40mph + winds pelted us as I struggled to get my camera under protection and my rain jacket on (the basic temperatures were benign enough that I hiked in shirtsleeves most of the time, despite the high winds).
Ten minutes later, the rain was gone and the sun back out. The wind persisted, so when we spotted an abandoned building in a field, we decided it was time for an early lunch--shelter of any kind is scarce along this coast.

This scenically rewarding stretch of the coast had another cool surprise, in the form of Scorrie's Island, a sea stack that appears to have a cave running clear through it.

When Wick Castle came into sight, we knew we were getting close--just as well for tired feet, though there were still two or three miles to go.

The walk into and through Wick was longer than we might have hoped, but interesting. By the end, however, my hiking partner was getting the message from his knee: back off. For the next two days, he drove the car to support my hike, visiting the best parts via shorter walks while I finished the trail solo.

The wind continued to blow fiercely, but shifted around overnight to blow from the NE instead of the SW, so I hiked the next leg of the trail north to south. Not needing taxis gave me choices, including the choice to be picked up where the trail turned to a road walk for the last 2 miles back to the hotel. A boisterous party at the hotel (it was Saturday night) meant tackling this 9.5 mile hike with a certain shortage of sleep, but the coastal "breeze" keeps you awake once you're out there. I departed Keiss Harbour at 8:30 a.m. in a light drizzle.

It was important to start at the right time to do this part of the hike at low tide, as the River of Wester can be a dangerous or impossible ford at high tide and/or flood conditions. It was convenient that low tide was at the right time for the usual start.

The river, when reached, was a non-issue, as hoped. My hiker partner had joined me for a good stretch of the beach in order to provide support if needed for the crossing (he's a great deal larger than I, a useful trait when crossing rivers). As it turned out, I was almost able to cross without getting my feet wet--if I recall, I only had to put one boot in water deep enough to wet my sock!

Once past the "barrier" of the river, it was on to the main features of the hike, though I found the beach walk to be meditative, as they so often are. At the end of the bay, I crossed in front of Ackergill Tower, originally built in the early 16th Century though most of what is there now was built in the 18th and 19th Centuries. It is now a private retreat center, so probably pretty modernized.

Climbing the bluffs south of Ackergill brought me to Sinclair Castle, built in the 16th Century and wrecked in the 1680s. Most of the ruined castles along the coast seem to have had some help in reaching that condition. 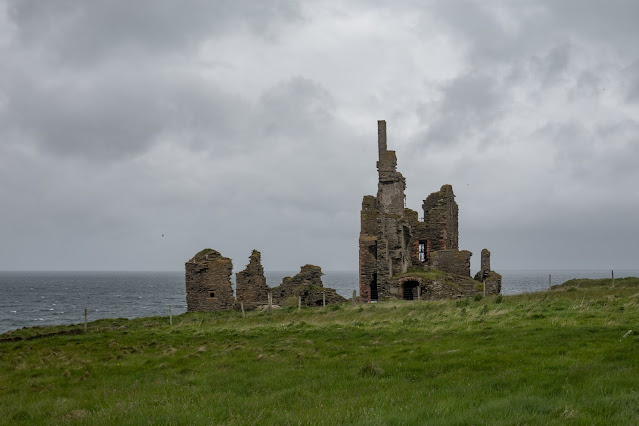 Wind and more drizzle kept me from thinking I wanted to move into this castle. The information posted about it makes it look like it was more hospitable in the 1600s, but I can't imagine it was ever comfortable, especially in winter!

Next up was the Noss Head Lighthouse. One of many built by members of the Stevenson Family (mostly the uncle of Robert Louis Stevenson, of authorial fame), it is still in service.

Beyond the lighthouse, I enjoyed a peaceful walk through fields along the bluffs, which grew ever lower as I approached the "suburbs" of Wick. When I reached the pavement, that was the end of the day's hike. 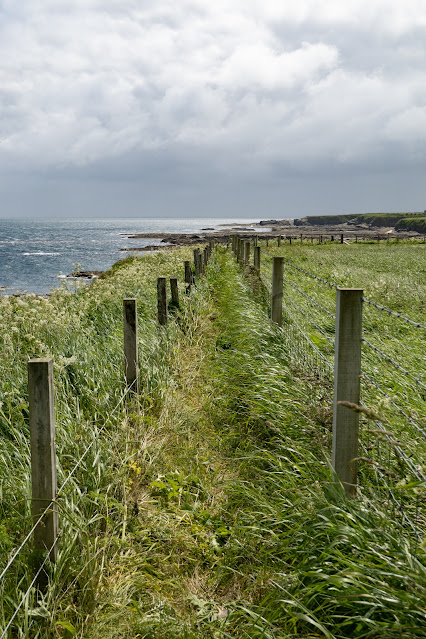 Off to the Seaview Hotel in John O'Groats for the final nights of the hike. I finished early enough that we had time to do a little more poking around on the north coast, with views of the Orkney Islands just across the channel. Then back to the Seaview for dinner!

I'd hoped to finish the trail with this post, but I just can't! So next week we'll have the final day of the trail and a visit to Edinburgh.

Until then, greetings from Stinklet and the Ninja Librarian.

©Rebecca M. Douglass, 2022
As always, please ask permission to use any photos or text. Link-backs appreciated.
Don't miss a post--click the "Follow-it" link below!