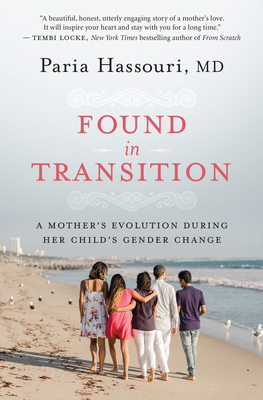 Publisher's Blurb:
On Thanksgiving morning, Paria Hassouri finds herself furiously praying and negotiating with the universe as she irons a dress her fourteen-year-old, designated male at birth, has secretly purchased and wants to wear to dinner with the extended family. In this wonderfully frank, loving, and practical account of parenting a transgender teen, Paria chronicles what amounts to a dual transition: as her child transitions from male to female, she navigates through anger, denial, and grief to eventually arrive at acceptance. Despite her experience advising other parents in her work as a pediatrician, she was blindsided by her child's gender identity. Paria is also forced to examine how she still carries insecurities from her past of growing up as an Iranian-American immigrant in a predominantly white neighborhood, and how her life experience is causing her to parent with fear instead of love. Paria discovers her capacity to evolve, as well as what it really means to parent and the deepest nature of unconditional love.

This page-turning memoir relates a tender story of loving and parenting a teenager coming out as transgender and transitioning. It explores identity, self-discovery in adolescence and midlife, and difference in a world that values conformity. At its heart, Found in Transition is a universally inspiring portrait of what it means to be a family.

My Review:
Found in Transition is an at times painfully honest memoir of a mother's reactions and growth when her child comes out as transgender. Hassouri has the courage to admit that she didn't react well when her 8th-grader, the family "problem child," announced he was she. Her reaction is understandable on many levels: this is a kid who has done a lot of things for a short time, often to get attention. It takes time for her to believe it is true, and longer for her to accept it. And it triggers her own worst insecurities left from her childhood as an Iranian immigrant and a chronic outsider at school.

It is beautiful to watch the change that comes over the author as she gradually comes to accept her daughter, and painful to watch the struggle that is created by the conflict over this, because she loves her child and only wants what is best for her--but she can't tell what that is. Out of the struggle she not only achieves peace with her child's reality, but also seems to come to a better understanding of who she, herself is, and what she wants, and makes some changes in her own life to better reflect that.

The book struck me as being important for a couple of key reasons: Hassouri is a pediatrician, and even she had little to no training in these matters in 2017 when the story begins (I think matters have improved). She discusses the myths that she had to unlearn--the worst being that transgender children always show signs of it from earliest childhood. The truth, as she learns, is that most find out when the hormones of puberty start, or even later. This erroneous belief was a large part of her refusal to take her child's gender dysphoria seriously.

Further, there is nothing necessarily visible on the outside to show a person is experiencing gender dysphoria. That is, until a person chooses to begin to dress or behave in ways that reflect their true gender, you can't know unless they tell you. The little boy who loves trucks and digging in the dirt is no less likely to turn out to be trans than the boy who likes dolls. That means: Unless or until your child tells you, you won't know. So it behooves you to make sure they know that's a possibility as the hit puberty. The author's daughter was lucky that she had parents involved in medicine in ways that made her aware of what it was to be transgender, because that wasn't as commonly known at the time even as it is now.

The other important message I got from the book was that just loving your kid and wanting the best for them won't keep you from screwing up. However, getting things wrong doesn't have to be fatal, and if lines of communication are kept open (and the author's child is amazingly communicative and open), a relationship doesn't have to be destroyed. Obviously, getting it right from the start is best, but not everyone can manage that.

My Recommendation:
This is a good read if you want to begin to understand what it means to be transgender--and all of us should want to know. It's not a definitive text by any means; it is a memoir. However, the book is a quick read, well-written and clear, providing just enough background to give the story substance and otherwise sticking mostly to the point--which is, in fact, the mother's journey, not the child's, but a journey that has everything to do with understanding transgender. Someday maybe her daughter will want to write her own book from her own perspective. I'd love to see it.

FTC Disclosure: I borrowed an electronic copy of Found in Transition from my library, and received nothing from the author or the publisher in exchange for my honest review. The opinions expressed are my own and those of no one else. I am disclosing this in accordance with the Federal Trade Commission's 16 CFR, Part 255: "Guides Concerning the Use of Endorsements and Testimonials in Advertising.”
©Rebecca M. Douglass, 2022
As always, please ask permission to use any photos or text. Link-backs appreciated.
Enjoyed this post? Avoid missing out on future posts with the “Follow Us” button at the bottom of the page!
memoir non-fiction review Transgender issues