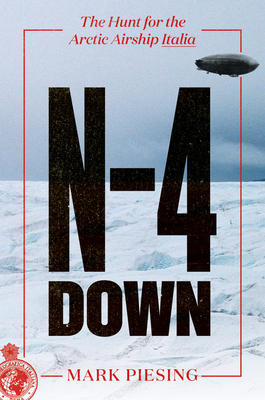 The riveting true story of the largest polar rescue mission in history: the desperate race to find the survivors of the glamorous Arctic airship Italia, which crashed near the North Pole in 1928.

Triumphantly returning from the North Pole on May 24, 1928, the world-famous exploring airship Italia—code-named N-4—was struck by a terrible storm and crashed somewhere over the Arctic ice, triggering the largest polar rescue mission in history. Helping lead the search was Roald Amundsen, the poles' greatest explorer, who himself soon went missing in the frozen wastes. Amundsen's body has never been found, the last victim of one of the Arctic's most enduring mysteries . . .

During the Roaring Twenties, zeppelin travel embodied the exuberant spirit of the age. Germany's luxurious Graf Zeppelin would run passenger service from Germany to Brazil; Britain's Imperial Airship was launched to connect an empire; in America, the iconic spire of the rising Empire State Building was designed as a docking tower for airships.

But the novel mode of transport offered something else, too: a new frontier of exploration. Whereas previous Arctic and Antarctic explorers had subjected themselves to horrific—often deadly—conditions in their attempts to reach uncharted lands, airships held out the possibility of speedily soaring over the hazards. In 1926, the famed Norwegian explorer Roald Amundsen—the first man to reach the South Pole—partnered with the Italian airship designer General Umberto Nobile to pioneer flight over the North Pole. As Mark Piesing uncovers in this masterful account, while that mission was thought of as a great success, it was in fact riddled with near disasters and political pitfalls.

In May 1928, his relationship with Amundsen corroded beyond the point of collaboration, Nobile, his dog, and a crew of fourteen Italians, one Swede, and one Czech, set off on their own in the airship Italia to discover new lands in the Arctic Circle and to become the first airship to land men on the pole. But near the North Pole they hit a terrible storm and crashed onto the ice. Six crew members were never seen again; the injured (including Nobile) took refuge on ice flows, unprepared for the wretched conditions and with little hope for survival.

Coincidentally, in Oslo a gathering of famous Arctic explorers had assembled for a celebration of the first successful flight from Alaska to Norway. Hearing of the accident, Amundsen set off on his own desperate attempt to find Nobile and his men. As the weeks passed and the largest international polar rescue expedition mobilized, the survivors engaged in a last-ditch struggle against weather, polar bears, and despair. When they were spotted at last, the search plane landed—but the pilot announced that there was room for only one passenger. . . .

Braiding together the gripping accounts of the survivors and their heroic rescuers, N-4 Down tells the unforgettable true story of what happened when the glamour and restless daring of the zeppelin age collided with the harsh reality of Earth's extremes.

My Review:
This book is both more and less than the lengthy and breathless blurb might suggest. Yes, all that stuff happened, more or less as described. But the book provides the full context for the voyage. We learn not only of the earlier sort-of-successful trip with Amundsen (who appears, if the author has it right, to have been a rather self-centered and annoying character), but of the history of airships--what we more commonly call zeppelins or dirigibles (the author even explains the difference between airships and blimps).

I at times wondered why airships didn't win out over airplanes. In the 1920s, airships were poised to be the means of commercial air travel, while planes were small and unreliable, unable to carry more than a few passengers. But, of course, we know the history: a couple of major fires showed up the inherent dangers of traveling beneath a giant bag of highly flammable hydrogen gas, while airplanes grew more reliable and capable. The explorations described in this book also illustrate the sensitivity of the giant airships to weather conditions.

As for the main event of the book, it struck me as a string of bad decisions, bad luck, and bad relations. By 1928 Mussolini was consolidating power in Italy, and Nobile had managed to get on the wrong side of the fascist dictator. Notably absent from those frantically mustering to rescue the downed airmen (a process that somehow took over a month, despite them having a radio to signal their location) were the Italians, for reasons the author makes clear.

A combination of aviation history, arctic exploration, and political developments between the wars makes this an interesting read. The audiobook is easy to follow and Matt Jamie does a good job of rendering it. There are a lot of names to keep track of, especially early on, which does make it something of a challenge.

My Recommendation:
Recommended for fans of arctic exploration and aviation history both.

FTC Disclosure: I borrowed an electronic copy of N-4 Down from my library, and received nothing from the author or the publisher in exchange for my honest review. The opinions expressed are my own and those of no one else. I am disclosing this in accordance with the Federal Trade Commission's 16 CFR, Part 255: "Guides Concerning the Use of Endorsements and Testimonials in Advertising.”
©Rebecca M. Douglass, 2022
As always, please ask permission to use any photos or text. Link-backs appreciated.
Enjoyed this post? Avoid missing out on future posts with the “Follow Us” button at the bottom of the page!
airplanes audio books book review polar exploration