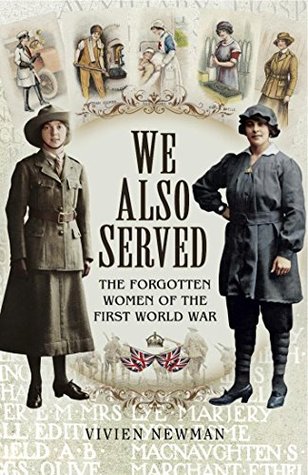 Publisher's Blurb:
We Also Served is a social history of women s involvement in the First World War. Dr Vivien Newman disturbs myths and preconceptions surrounding women's war work and seeks to inform contemporary readers of countless acts of derring-do, determination, and quiet heroism by British women, that went on behind the scenes from 1914-1918.

In August 1914 a mere 640 women had a clearly defined wartime role. Ignoring early War Office advice to 'go home and sit still', by 1918 hundreds of thousands of women from all corners of the world had lent their individual wills and collective strength to the Allied cause. As well as becoming nurses, munitions workers, and members of the Land Army, women were also ambulance drivers and surgeons; they served with the Armed Forces; funded and managed their own hospitals within sight and sound of the guns. At least one British woman bore arms, and over a thousand women lost their lives as a direct result of their involvement with the war. This book lets these all but forgotten women speak directly to us of their war, their lives, and their stories."

My Review:
We Also Served is a nice look at what WWI was like for (mostly British) women. The book reminds us that women didn't just sit at home and knit (though that knitting was an important contribution, not just a token effort), but served in various nursing corps, official military units, and in ways that put their lives on the line as much as any man. They just had to do it wearing skirts (with a few exceptions for safety), and didn't get much recognition for their contributions, especially those who served in "the Land Army" that kept British agriculture going with most of the young men in the army.

I loved the little snippets from the lives and letter of women both famous and unknown, which provide glimpses into what it was like to serve as a nurse or to produce gunpowder and shells. Ultimately, however, as with most books of this sort, I felt a little cheated of the depth I wanted. The author has made a choice to cover a lot of women in a lot of roles, probably in part because of a lack of information to dig more in-depth into most of their lives. The result is a book that feels a little frustratingly like a survey, even while offering new information on every page. I would love to see more books written on each of the branches of service to which Newman can offer only a single chapter.

In the end, the book's a great start towards an improved understanding of both women's contributions to the war effort--and the turning point where, as I believe, the women's rights movement began to take off. The authorities in England and the US alike did all they could after the war to put women back in their old places, but that's a genie that once out of the bottle couldn't go back. Many women were unable to ever build on the glimpses of a broader life they got during the war, but some refused to ever go back.

My Recommendation:
Read it. Then keep looking for other books that tell the world that history is sometimes herstory!

FTC Disclosure: I borrowed an electronic copy of We Also Served from my library, and received nothing from the author or the publisher in exchange for my honest review. The opinions expressed are my own and those of no one else. I am disclosing this in accordance with the Federal Trade Commission's 16 CFR, Part 255: "Guides Concerning the Use of Endorsements and Testimonials in Advertising.”
©Rebecca M. Douglass, 2022
As always, please ask permission to use any photos or text. Link-backs appreciated.
Enjoyed this post? Avoid missing out on future posts with the “Follow Us” button at the bottom of the page!
book review women's history WWI