I am at my Artist Residency with limited internet access, so today I'm doing a re-run. I will respond to comments next week after I'm home. This post will have to do for Monday, too.

This story was originally written in 2015.

"You're always cold. That's the trouble with you females. You can’t handle the weather at all."

"It's July. It shouldn't be this cold here. Are you sure we're in the right place?"

He made an exasperated noise. "Of course I'm sure."

She sighed in her turn. "You're always so certain you are right."

Hera hated it when he brought that up. Anyway, she was a god, too. "Well, yes, dear, but..." She didn't finish the sentence. They both knew she was thinking about Leda. That had taken some tricky explanations on his part, and she had really only pretended to believe him. But he'd had to claim it was a navigation error, and that gave her a lever now. Plus, there was that time he took out the wrong village with a thunderbolt, and wiped out a hundred loyal followers instead of a crew of rogues. Zeus didn’t have a great record as a navigator.

"But it's been an awfully long time since we visited Olympus," she insisted. "Won't you just check the GPS? That's why we got it, remember? There’s an awful lot of snow. And where is the hall? Remember, we had a great hall atop Mt. Olympus?"

Zeus sighed again, even more dramatically, and dug around in his robes. They had too many folds; it was hard to find the pockets. Originally, they hadn't had any pockets, and it hadn't mattered three or four millennia back. Now it seemed there were so many things to keep track of, and he could never find the right pocket.

He found the GPS in the top left pocket, and pulled it out, along with a flashlight so he could see it. He could have used a lightning bolt, but those things took a lot of effort. A flashlight was easier. He shone the light on the little device, and scowled. A bit of thunder sounded in the near distance, proof he was getting irritated.

Hera hastened to hand him her own reading glasses before he could resume the dramatic search through his robes. Really, these new-fangled purses and hip-packs made it much easier to keep track of things than pockets did. Leave it to Zeus to be old-fashioned about such things, though. He’d kicked about getting pockets until none of the lesser gods would haul his stuff around for him. Then he’d had to find a way to carry it himself. Now he wouldn’t move on from pockets, though Hermes was using a backpack these days.

Zeus put on the glasses and squinted at the little device. He pushed a few buttons, and gave a triumphant exclamation.

She bent closer to look at the device, reclaiming her glasses so that the tiny screen would come into focus. It was tough getting this old. Nothing worked like it used to, and if the conditions on this peak were any indication, they'd lost their followers. She knew they shouldn't have stayed so long in Elysium. If you didn't stay on top of worshipers, they strayed away after other gods. Nowadays they were all excited about technology and didn’t think the gods mattered any more. She and Zeus had come back to clear up that confusion.

Mind, technology had its uses, she thought as she studied the GPS device. In this case, it explained what had gone wrong. Though, she mused, it was also probably responsible for their being lost. She peered more closely at the screen.

"Dear?" Her tone was gentle, which put Zeus on notice that he was in trouble. "Here's the problem."

He studied where she was pointing. "'Washington'? What kind of a place is that?"

"I don't know, dear. But they appear to have a great admiration for us. Or at least for our home."

"Well," he said defensively, "you have to admit I was right. We are on Mt. Olympus."

"Yes, dear," Hera said, resigned. "But this Mt. Olympus is in some barbaric place called Washington State. And I've just asked for the route to Greece, and it appears to be... rather far."

Zeus peered into the gloom. It was snowing a bit now. "Well," he said, "this seems a nice enough place, and there aren't so many tourists..." He broke off as she made a disgusted sound. "Very well, dear. We'll start for Greece at once."

The pair of gods rose into the air and vanished. The GPS unit lay on the mountaintop, glowing softly until Zeus reached back with a small lightning bolt and vaporized the thing.

Really, it's the sort of mistake anyone could make! 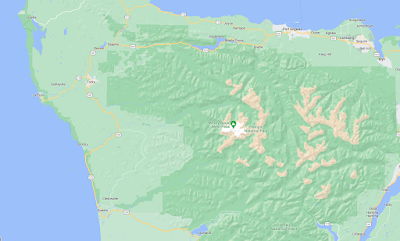 ©Rebecca M. Douglass, 2022
As always, please ask permission to use any photos or text. Link-backs appreciated.
Don't miss a post--click the "Follow-it" link below!