Non-Fiction Audiobook Review: A Game of Birds and Wolves 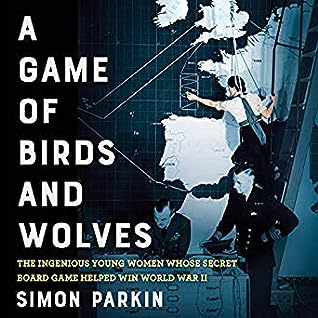 Publisher’s Blurb:
The triumphant story of a group of young women who helped devised a winning strategy to defeat the Nazi U-boats and deliver a decisive victory in the Battle of the Atlantic

By 1941, Winston Churchill had come to believe that the outcome of World War II rested on the battle for the Atlantic. A grand strategy game was devised by Captain Gilbert Roberts and a group of ten Wrens (members of the Women's Royal Naval Service) assigned to his team in an attempt to reveal the tactics behind the vicious success of the German U-boats. Played on a linoleum floor divided into painted squares, it required model ships to be moved across a make-believe ocean in a manner reminiscent of the childhood game, Battleship. Through play, the designers developed "Operation Raspberry," a countermaneuver that helped turn the tide of World War II.

Combining vibrant novelistic storytelling with extensive research, interviews, and previously unpublished accounts, Simon Parkin describes for the first time the role that women played in developing the Allied strategy that, in the words of one admiral, "contributed in no small measure to the final defeat of Germany." Rich with unforgettable cinematic detail and larger-than-life characters, A Game of Birds and Wolves is a heart-wrenching tale of ingenuity, dedication, perseverance, and love, bringing to life the imagination and sacrifice required to defeat the Nazis at sea.

My Review:
I have to say that this was a fascinating story of a little-known bit of WWII history, but the publisher's blurb goes a bit astray. Can't say it's heart-wrenching, and the love stories aren't exactly central, though there is one kind of fun war-wedding. Nor, ultimately, is this book about the Wrens. Let's be clear: it's about Captain Roberts, Churchill, several captains of Allied ships and German U-Boats, the Battle of the Atlantic, and only after all that about the women. The game is Roberts' brainchild, though the women proved excellent practitioners of it, and did develop some of the strategies that came out of it. Perhaps still more inspiring, the Wrens managed to act as instructors to the officers who came to play the game and learn the strategies, almost all of whom outranked them, and most of whom were skeptical of the ability of a woman to understand anything about naval strategy. That tells you something about the skills these women had.
With that caveat, and a bit of disappointment as to the role of the women in the book as well as in reality, the book is well-written. I was engaged in the story and interested in the game as well as in all the other tidbits of history included to (in effect) pad out a thin story to book length. One thing that sticks with me, that I hadn't known, was that England had conscription for women during the war, requiring registration and for certain classes of women. They then had to select a job from a list of necessary occupations, from the Women's Land Army to tasks closer to the firing line.
The prose flows well, and the reader did an excellent job. There are a lot of threads in different peoples' lives woven together. While that's a decent narrative strategy, I have to say that for me it doesn't work as well in an audio book, where I have to rely on my memory to keep straight who these people are after moving away from them for a time.
My Recommendation:
Recommended for those who are interested in learning more about the Battle of the Atlantic (about which the author is correct--it doesn't get a lot of play in the history books), as well as how games are used for serious military purposes. Or for those who just have to read everything they can find about the war.
FTC Disclosure: I borrowed an electronic copy of A Game of Birds and Wolves from my library, and received nothing from the author or the publisher in exchange for my honest review. The opinions expressed are my own and those of no one else. I am disclosing this in accordance with the Federal Trade Commission's 16 CFR, Part 255: "Guides Concerning the Use of Endorsements and Testimonials in Advertising.”
©Rebecca M. Douglass, 202
As always, please ask permission to use any photos or text. Link-backs appreciated.
Enjoyed this post? Avoid missing out on future posts with the “Follow Us” button at the bottom of the page!