Non-fiction Review: Tigers of the Snow 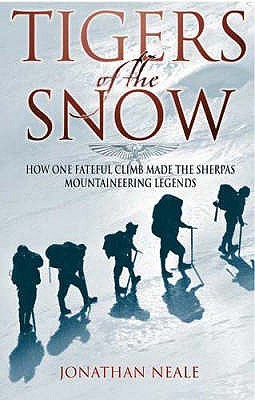 Title: Tigers of the Snow: How One Fateful Climb Made the Sherpas Mountaineering Legends
Author: Jonathan Neale
Publication Info: Thomas Dunne Books, 2002. 320 pages
Source: Kamzang Journeys trekking library!
Publisher’s Blurb:
In 1922 Himalayan climbers were British gentlemen, and their Sherpa and Tibetan porters were "coolies," unskilled and inexperienced casual laborers. By 1953 Sherpa Tenzing Norgay stood on the summit of Everest, and the coolies had become the "Tigers of the Snow."

Jonathan Neale's absorbing new book is both a compelling history of the oft-forgotten heroes of mountaineering and a gripping account of the expedition that transformed the Sherpas into climbing legends. In 1934 a German-led team set off to climb the Himalayan peak of Nanga Parbat, the ninth highest mountain on earth. After a disastrous assault in 1895, no attempt had been made to conquer the mountain for thirty-nine years. The new Nazi government was determined to prove German physical superiority to the rest of the world. A heavily funded expedition was under pressure to deliver results. Like all climbers of the time, they did not really understand what altitude did to the human body. When a hurricane hit the leading party just short of the summit, the strongest German climbers headed down and left the weaker Germans and the Sherpas to die on the ridge. What happened in the next few days of death and fear changed forever how the Sherpa climbers thought of themselves. From that point on, they knew they were the decent and responsible people of the mountain.

Jonathan Neale interviewed many old Sherpa men and women, including Ang Tsering, the last man off Nanga Parbat alive in 1934. Impeccably researched and superbly written, Tigers of the Snow is the compelling narrative of a climb gone wrong, set against the mountaineering history of the early twentieth century, the haunting background of German politics in the 1930s, and the hardship and passion of life in the Sherpa valleys.
My Review:
Reading this book while trekking in the Everest region made it particularly interesting to me, but it would be good reading even on a tropical beach. Despite the subtitle and the blurb, the book covers a great deal more than just the crucial 1934 climb. The early chapters provide a great deal of history and cultural information about the Sherpa people, which I appreciated.

The narratives of the climbs--both the 1934 climb and a number of others both before and after--were interesting as climbing stories, but even more so as studies in the colonial attitudes which all the European climbers, but especially the British (and the Germans, though in some different ways) brought to the early climbs. Neale makes clear the inherent contradiction in the assumption both of European superiority and the Sherpa ability to carry far greater loads with far less food. It is hard to understand how any intelligent person could have expected so much from their porters yet assumed they were incapable of the great physical demands of the summit push. Of course, that's the inherent contradiction in most colonial thinking.
Neale also documents how and why the Sherpas began to learn climbing techniques, laying the foundation for Tenzing Norgay to stand atop Everest with Hillary. And if the deadly Nanga Parbat climb of 1934 was a key factor--it proved to both the Sherpas and the rest of the climbing community that they were as tough or tougher than their European counterparts, among other things--there were plenty of other climbs that chipped away at the barriers between climbers before any Sherpa could achieve equal billing with a European climber.
Finally, Neale's own explanation of the style of the book, partly constructed from official (European) records of the historic climbs, and partly gleaned from oral history directly from Sherpas who were there, addresses the basic problem with so much history: that, as the saying goes, the victors write the history books. If his exposure of the inequalities in the relations between "Alpinists" and Sherpas sparks a sense of indignation at the injustice, it also sparks some self-examination when read while on a trek catered by Sherpa guides who demonstrated that they could hike everything we could, carrying more weight, and still have the energy to lay the tea table and schlepp our bags to our rooms. At least we knew and acknowledged who was strong and in charge!
My Recommendation:
For anyone interested in mountaineering and in particular the history of climbing in the Himalayas, I think this book is essential.
FTC Disclosure: I borrowed a copy of Tigers of the Snow, and received nothing from the author or the publisher in exchange for my honest review. The opinions expressed are my own and those of no one else. I am disclosing this in accordance with the Federal Trade Commission's 16 CFR, Part 255: "Guides Concerning the Use of Endorsements and Testimonials in Advertising.”
©Rebecca M. Douglass, 2021
As always, please ask permission to use any photos or text. Link-backs appreciated.
Enjoyed this post? Avoid missing out on future posts by following us.
book review climbing history Nepal non-fiction review