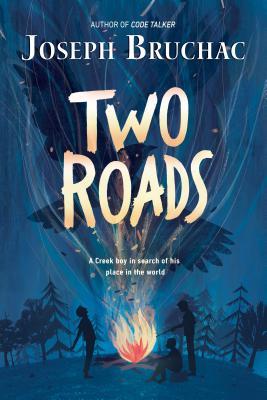 Title: Two Roads
Author: Joseph Bruchac
Publication Info: 2018 Dial Books. 320 pages
Source: Library digital resources
Publisher’s Blurb:
It's 1932, and twelve-year-old Cal Black and his Pop have been riding the rails for years after losing their farm in the Great Depression. Cal likes being a knight of the road with Pop, even if they're broke. But then Pop has to go to Washington, DC--some of his fellow veterans are marching for their government checks, and Pop wants to make sure he gets his due--and Cal can't go with him. So Pop tells Cal something he never knew before: Pop is actually a Creek Indian, which means Cal is too. And Pop has decided to send Cal to a government boarding school for Native Americans in Oklahoma called the Challagi School.

At school, the other Creek boys quickly take Cal under their wings. Even in the harsh, miserable conditions of the Bureau of Indian Affairs boarding school, he begins to learn about his people's history and heritage. He learns their language and customs. And most of all, he learns how to find strength in a group of friends who have nothing beyond each other.
My Review:
This was one of my random picks from the library's Overdrive catalog, but I knew that if Bruchac wrote it, it would be worth reading. Once again, he delivered, though I almost felt like things went too well in this book--it was kind of lacking the edge that comes of putting more obstacles in the characters' paths. That might be a criticism, but it might also be part of why I enjoyed reading the book just now: it wasn't too challenging. I was learning some more about a bit of US history that--like so many of the less savory parts--I knew something of, but was never more than vaguely alluded to in any class at school.
By setting the book in the 1930s, Bruchac was able to avoid the real horrors of the Indian schools (something that has been coming out, both about US and Canadian school, in recent years). He alludes to them, but when Cal attends Challagi the biggest difference between it and many other boarding schools at the time was the assumption that the Indian students couldn't really learn academics, a bit of racism that at least led to good training in farming.
The parts of the book set "on the road" were interesting, though again I wondered if they were presented in a bit too positive a light. Bruchac does make reference to the many men out there who were anything but "knights of the road," and the dangers faced especially by a boy alone. The more romantic view is perhaps that of Cal himself.
In the end, the story worked for me. I cared deeply about Cal and his journeys, both literal and metaphorical, as he learns about his own Creek heritage and what that can mean--including the very good reasons why his father had chosen to "pass" as white.
My Recommendation:
An enjoyable read, not too challenging but still good for opening the eyes about issues of race and justice, with a very relatable main character in Cal. Suitable for younger kids than many of Bruchac's works; I would say about 9 and up, at least with some guidance/discussion of some of the history.
FTC Disclosure: I borrowed an electronic copy of Two Roads from my library, and received nothing from the author or the publisher in exchange for my honest review. The opinions expressed are my own and those of no one else. I am disclosing this in accordance with the Federal Trade Commission's 16 CFR, Part 255: "Guides Concerning the Use of Endorsements and Testimonials in Advertising.”
©Rebecca M. Douglass, 2021
As always, please ask permission to use any photos or text. Link-backs appreciated.
Enjoyed this post? Avoid missing out on future posts by following us.
book review historical fiction middle grade fiction Native Americans