Non-fiction audiobook review: The Ice at the End of the World

I missed Friday's post entirely. I noticed it late in the day, but didn't really feel like rushing something together even for a "photo Saturday" post. Instead, I'm skipping ahead, and getting a start on this week's posts. The thing is--I'm writing!

Still, I have a review for today. 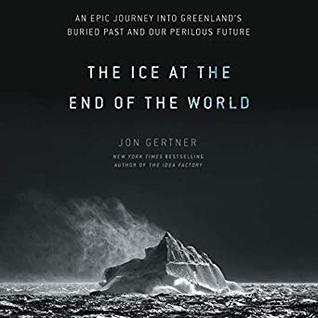 Title: The Ice at the End of the World: An Epic Journey Into Greenland's Buried Past and Our Perilous Future
Author: Jon Gertner; read by Fred Sanders
Publication Info: Random House Audio, 2019. 13 hrs. Original hardback published 2019, Random House. 418 pages.
Source: Library digital resources
Publisher’s Blurb:
Greenland: a remote, mysterious island five times the size of California but with a population of just 56,000. The ice sheet that covers it is 700 miles wide and 1,500 miles long, and is composed of nearly three quadrillion tons of ice. For the last 150 years, explorers and scientists have sought to understand Greenland--at first hoping that it would serve as a gateway to the North Pole, and later coming to realize that it contained essential information about our climate. Locked within this vast and frozen white desert are some of the most profound secrets about our planet and its future. Greenland's ice doesn't just tell us where we've been. More urgently, it tells us where we're headed.

In The Ice at the End of the World, Jon Gertner explains how Greenland has evolved from one of earth's last frontiers to its largest scientific laboratory. The history of Greenland's ice begins with the explorers who arrived here at the turn of the twentieth century--first on foot, then on skis, then on crude, motorized sleds--and embarked on grueling expeditions that took as long as a year and often ended in frostbitten tragedy. Their original goal was simple: to conquer Greenland's seemingly infinite interior. Yet their efforts eventually gave way to scientists who built lonely encampments out on the ice and began drilling--one mile, two miles down. Their aim was to pull up ice cores that could reveal the deepest mysteries of earth's past, going back hundreds of thousands of years.

Today, scientists from all over the world are deploying every technological tool available to uncover the secrets of this frozen island before it's too late. As Greenland's ice melts and runs off into the sea, it not only threatens to affect hundreds of millions of people who live in coastal areas. It will also have drastic effects on ocean currents, weather systems, economies, and migration patterns.

Gertner chronicles the unfathomable hardships, amazing discoveries, and scientific achievements of the Arctic's explorers and researchers with a transporting, deeply intelligent style--and a keen sense of what this work means for the rest of us. The melting ice sheet in Greenland is, in a way, an analog for time. It contains the past. It reflects the present. It can also tell us how much time we might have left.
My Review:
In some ways, I don't think that blurb has left me much to say! I found the book solidly written, if not always gripping, and I appreciated the way it encompassed not only the adventurous-explorer era and the real and important science that has been and is being done on the ice sheet.
My interest in the topic stems from several sources. Of course, I'm always up for a good story about explorers and adventures, and Gertner does a good job with this, picking up different explorers from some I've read about recently. More importantly, I consider climate change to be the biggest threat to just about everything we know and love. Gertner presents, in the final chapters, a clear accounting of how Earth's rising temperature is already deeply entrenched, and the speed with which it is melting the ice. If I may be forgiven the inappropriate metaphor, it's a chilling set of statistics.
Of course, I already knew this. A friend has been doing ice sheet research for quite a few years now, and he's been clear about the unprecedented extent of melting they find there. It doesn't take much thinking to figure out why, while the early explorers and scientists did much if not most of their work during the summer, scientists now are pretty much limited to the spring. By summer, the ice sheet is too wet, melting with enthusiasm.
There may be a certain irony, indeed, in the way the tale of the loss of the ice matches the progression of ever more advanced means of transportation to study it. The same motorized sleds and airplanes that make it possible to study in the middle of the ice without excessive risk to life and limb are part of the problem, as it were.
My Recommendation:
An interesting read for lovers of exploration and science, and an important book for the dispassionate presentation of the reality of the melting ice sheet.

FTC Disclosure: I borrowed an electronic copy of The Ice at the End of the World from my library, and received nothing from the author or the publisher in exchange for my honest review. The opinions expressed are my own and those of no one else. I am disclosing this in accordance with the Federal Trade Commission's 16 CFR, Part 255: "Guides Concerning the Use of Endorsements and Testimonials in Advertising.”
©Rebecca M. Douglass, 2021
As always, please ask permission to use any photos or text. Link-backs appreciated.
Enjoyed this post? Avoid missing out on future posts by following us.
audio books book review polar exploration science