I keep thinking I can cover more than 2 days in a single post, but there are so many photos, and we did so much! So forgive my self-indulgence and be patient as I work my way down the river. For Zeke, I'm adding info about our camps and stops.

This was a day for an early start, due to the logistics of running a river whose flow is controlled by a region's power needs. Crystal Rapids is a notoriously challenging stretch, and is easier at low water. Thus we were hurried along to get to the rapids before the morning's release from the dam (to power the SW) reached that stretch of the river. We left camp at 8 a.m. and headed straight into Boucher Rapids, leaving us all cold and wet (especially those in the bow of the boat).

Of course, I don't really have any photos of going through the rapids, since I was too busy hanging on. I was more likely to get photos when we paused below a rapid to keep an eye on the boats behind us.
By the time we'd been through Boucher and Crystal, those in the front of the raft were really cold, so I swapped places to give Tom a break from the worst splashing as we went into "the Jewels," another series of 7 splashy rapids. We finished with Bass Rapid just before camp--a good thing, as I got a river-load of water down the front of my jacket and was set to get cold, too!

Making camp before lunch allowed us to do another substantial hike, up and over a ridge into Shinumo Creek, where William Bass had a tourist camp long ago. Climbing an 800' ridge in the mid-day heat, even starting with wet clothes, was painful, but worthwhile.

On this hike we finally started seeing some flowers, mostly cactus blossoms.

Once over the top we dropped quickly into Shinumo Creek, where cottonwoods offered some shade.

At the turn-around point, a glorious swimming hole.

Of course, by the time we got back to camp we were hot and tired again! Some of us took our time, lingering over the flowers in hopes that the sun would stop shining so much on the black Brahma schist that backdropped the campsite (and held the heat well into the night). We were ready for dinner after that hike!

We started the day with the cinnamon cake that had refused to cook in time for dessert--all were agreed that it made a great addition to breakfast, so no complaints. This morning, I took a front seat in the dory, rapidly becoming my boat of choice.

About 10 we stopped for a 4-mile hike into Garnet Canyon. It started with a fun rock scramble, before we hiked around and into the canyon.

Garnet proved to have a nice little slot canyon to explore, with some help up a couple of small pour-offs. 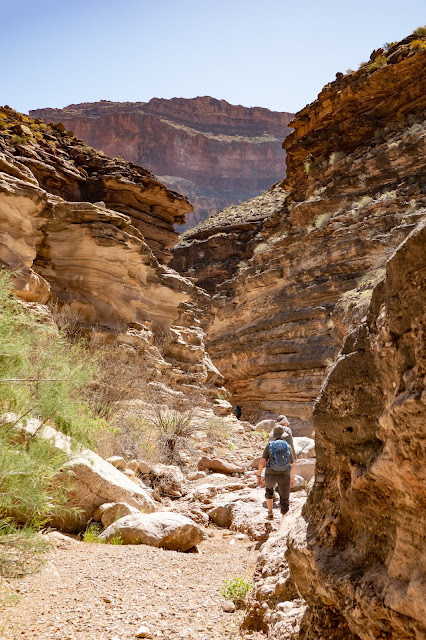 I'm pretty sure there's a way around, but this was a pretty effective stopping point for us.

Back to the rafts for lunch, before we shoved off to get to the next short hike. 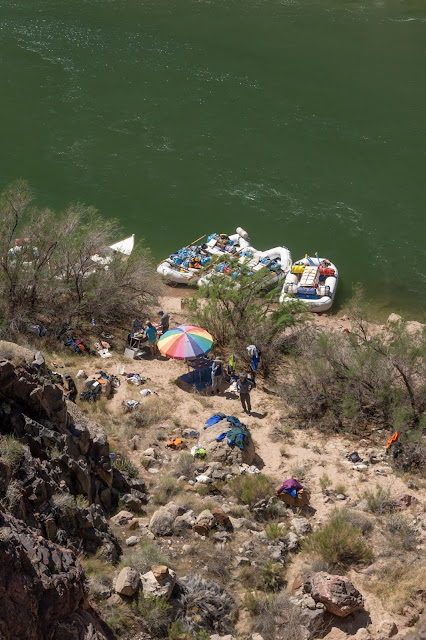 That's right--Day 10 was a two-hike day. The second, though, was about 10 minutes up to Elves Chasm, a beautiful bit of creek with a waterfall and a cavern behind.

Several of the guides and a couple of the passengers made the climb up behind the rocks on the right to the slippery jumping-off point. They made quite a splash. 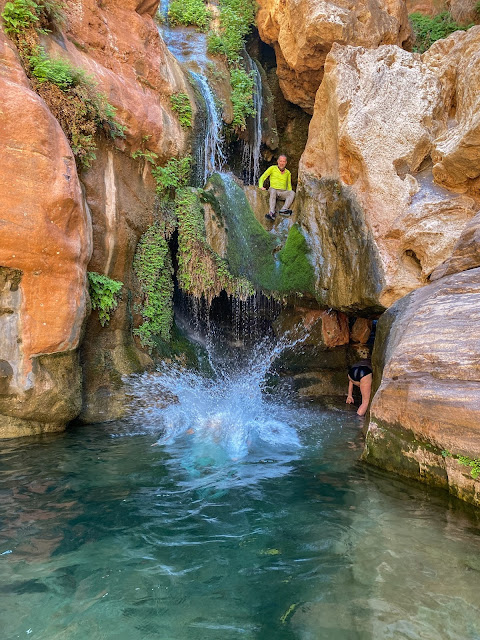 I wasn't about to jump, but I put my waterproof cell phone in a pocket and went to take photos from a different perspective.

Naturally, I took some videos.


From the Elves Chasm it was another couple of miles down a calm bit of river to camp, making this one of our shorter river days--only about 12 miles, but with lots of great exploration. Sitting in a boat on the river is stunning, but there is no doubt in my mind that it's the side hikes that really make the trip. 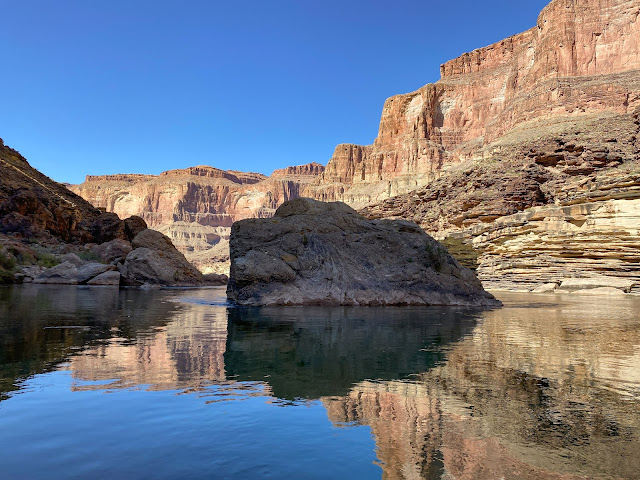