It was a near thing, but I made it with Photo Friday on Friday! It's long, but to paraphrase Mark Twain and Blaise Pascal, I didn't have time to write a shorter post.

If you missed them, click here for Parts One and Two of my Grand Canyon rafting adventure. I'm covering two days per post so far, though with some major hikes coming up as well as some days when we didn't do much, that may vary.

On day three or four I had wondered if 16 days would feel like a rather long trip. A couple of days of wind-blown sand made it clear that there could be conditions that would make it feel that way. But on the whole, it was starting to feel right, being on the river, and a realization was dawning that 16 days might not be enough.

Excitement mounted in the morning as we took a little extra time to pack bag lunches in preparation for our first substantial hike.

Ten miles down the river we pulled in to camp by Escalante rapid and did a quick set-up before heading up into the tangle of ridges and hills above our camp. For those who imagine that that Canyon is a single monolithic hole in the ground, an area like this is a corrective. Our destination: the Tabernacle.

At 2200' above the river, the summit of the Tabernacle provided fantastic views, but the climb was grueling. Between the river distance we had to cover and making camp, we started up after 11 a.m. I make a point of never hiking in the middle of the day in the desert, for good reason. But the river trip forced a different reality. We soaked our clothes and headed up (at least, the core of crazy hikers went for the top).

A willingness to climb brings the reward of ever-widening views.

Examining the flora, fauna, and geology makes a time-honored excuse to stop, as does photography.

The view from the summit. 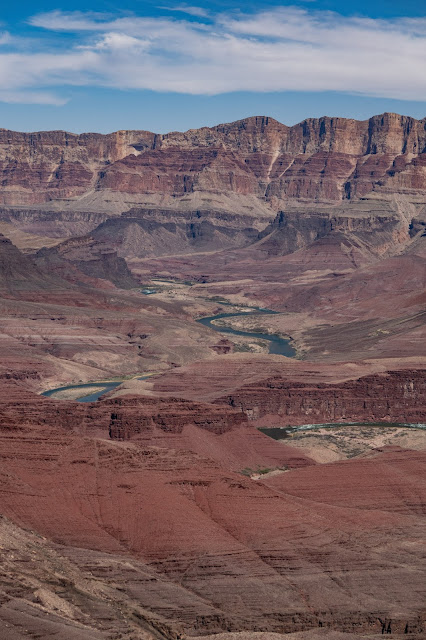 We shoved off in the morning under almost the most cloud we had the whole trip. Weather can be dodgy in April, but though we roasted a bit in the midday heat, we had no rain, well under the average wind, and nothing to complain of. 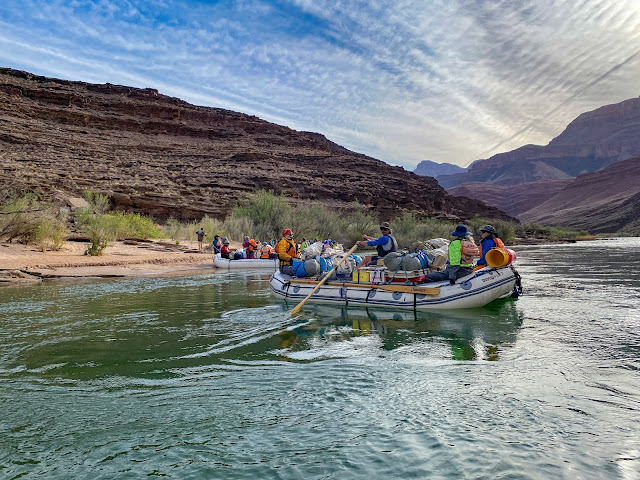 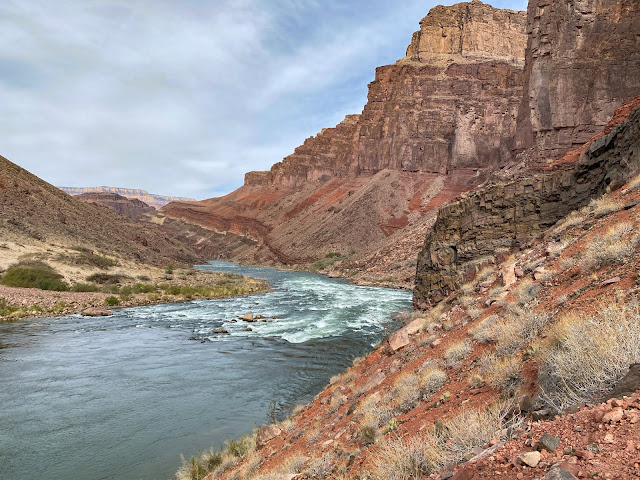 To avoid getting caught in the congestion around Phantom Ranch, we took an early lunch (our Trip Leader, Lorna Corson, is as willing as I am to eat lunch early and often) on one of the best rock shores we encountered (I might have said that about several of them...). 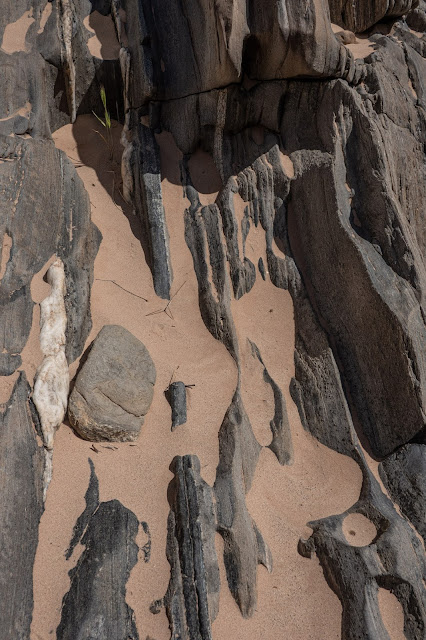 Soon after lunch we reached the first foot bridge, for the Kaibab trail.

A half a mile later, we crossed under the Bright Angel bridge, the last vestige of civilization for 100 miles or more. 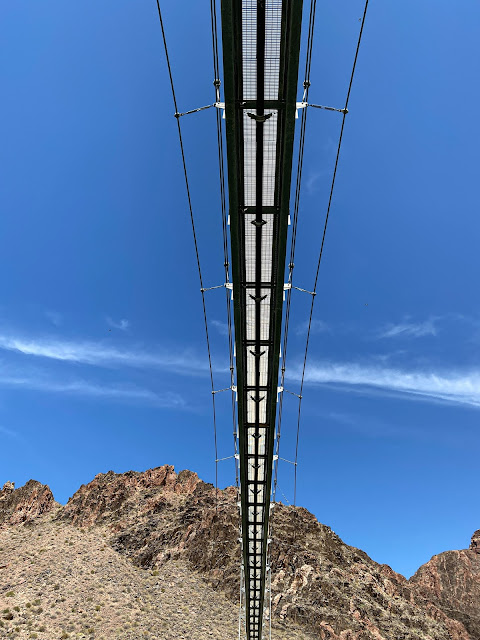 No hiking today, so we continued downstream for a 21-mile day. 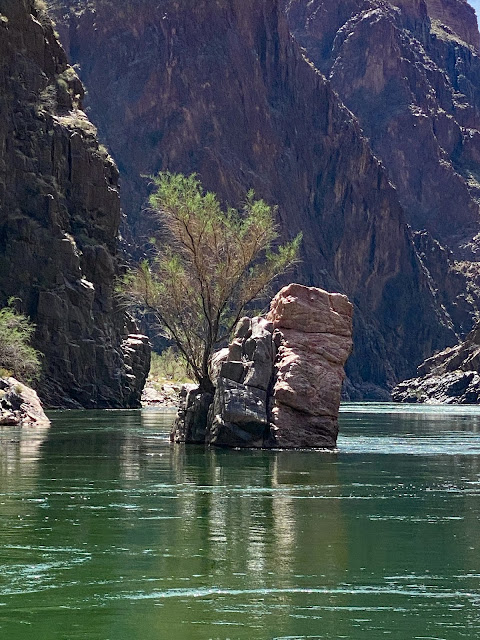 Made camp in a spot that seemed so benign, but the wind came up and we realized why so much sad was piled up the hills against the rocks where we were camped. The wind and grit made this probably the least comfortable night, but also the last one I bothered with a tent, since the tent did little to keep out the grit! 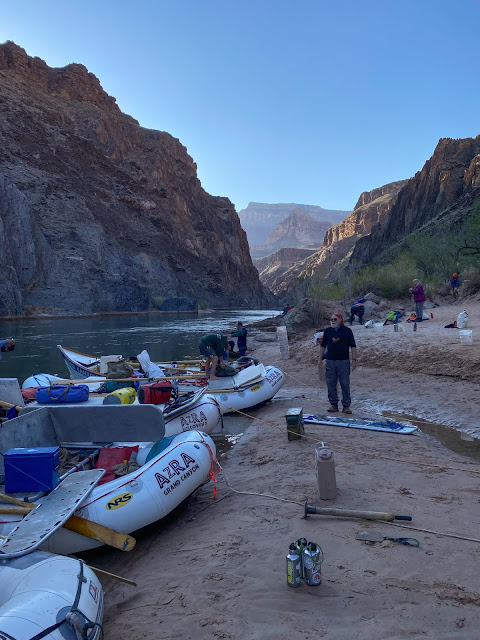 For those who wondered... there are strict rules about human waste in the canyon. We were able to manage that in comfort. The yellow bucket is for pee, to be emptied into the river. Beneath the white lid is the "groover," for solid waste. By the end of the trip we had 8 sealed vaults full of that. 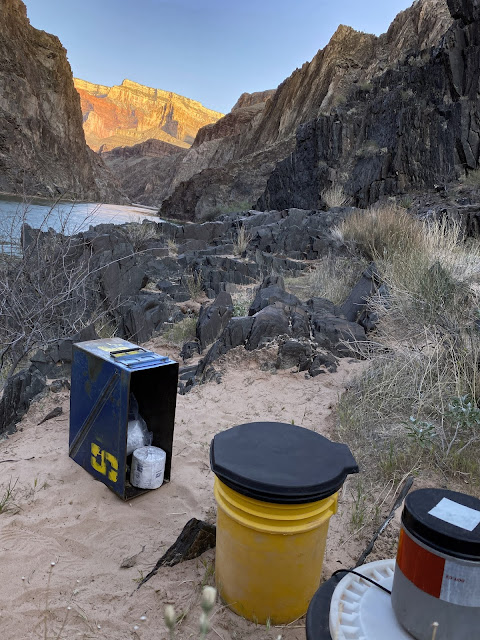 It isn't genteel, but you have to admit that it was a loo with a view!