Got distracted, so as so often happens, my Friday post is here today!

Some of you may have noticed that I was gone most of April. I was off enjoying a mobile COVID pod, otherwise known as rafting the Colorado River through the Grand Canyon! I'm still working on the photos (of course), but here's a quick look at some from the first two days of the trip! We booked with AZRA--Arizona Raft Adventures--and were extremely happy with the whole trip.

The trip started and ended in Flagstaff--so with a 3-hour bus ride. This might have been our chance to start getting to know each other, but masked and still thinking about COVID, we tended to stay in our seats. In my case, that was the front seat, in my quest to avoid motion sickness.

We stopped at the Navajo Bridge--the only river crossing for a long way in either direction--to see the Canyon for the first time, and to check for condors.

We arrived at Lee's Ferry, the standard put-in for Grand Canyon trips, in the late morning. A flurry of activity got the bus unloaded, then we found lifejackets and prepared to load the boats. 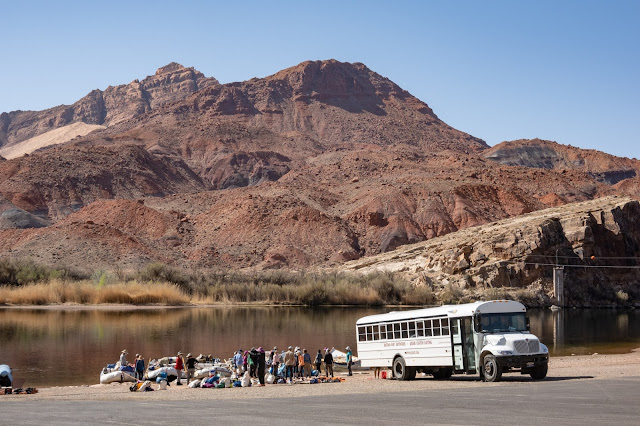 Much faster than I would have expected, we were pushing off from the landing, loaded down with all our dry bags and, as we would learn, a veritable mountain of food.

In no time at all we were cruising back under the bridges we'd just crossed, and entering the wilderness. In the next nearly 300 miles, the only crossing is a pair of foot bridges at Phantom Ranch (Mile 88. Miles on the river are counted from Lee's Ferry).

With a stop for lunch, we pushed on down the river until about 6 p.m. The wind was calm, a boon not to be cast away by the people who have to row against the almost constant headwinds in the Canyon. It did mean that we arrived in camp pretty much frozen, soaked by rapids and long since having seen the last of the sun.

The campsite we got that night was pretty tight, so I put up a tent in "condo row " (far left). I wondered if we could really dry our things as night was so near, but I shouldn't have worried.

Morning comes early on the river. By shortly after 5 cowboy coffee was on the stove, and long before 6 we were up and packing. I never had to worry about missing the best morning light.

That first morning it took us to 8:45 to reach launch, though by the end of the trip we were ready as early as 8 each day.

With the winds again favorable to rowing, we didn't try to hike the second day, either.  But we did make a pretty much required stop at the Redwall Cavern, which John Wesley Powell described as large enough to hold a symphony concert. He exaggerated some, but it is very large and has nice acoustics.

We always got to stop and get off for lunch, a chance to dry off and stretch our legs before the next exciting stretch of rapids (it took a few days before I got any photos of rapids--I had to get over the tendency to cling in terror to the lines!)

This second night I decided to go with the standard for Canyon camping--no tent. That would become my norm, and I put up my tent only twice more, when wind-blown sand drove me to try to find shelter.

After two days, I knew it was going to be a wonderful trip, but I admit I wondered if 16 days would feel too long. Spoiler alert: it didn't.

Watch this space for more photos from the trip!