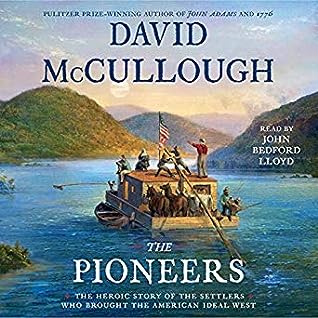 Title: The Pioneers: The Heroic Story of the Settlers Who Brought the American Ideal West
Author: David McCullough. Read by John Bedford Lloyd
Publication Info: Simon & Schuster Audio, 2019. 10hrs 23 min.
Source: Library digital resources
Publisher’s Blurb:
As part of the Treaty of Paris, in which Great Britain recognized the new United States of America, Britain ceded the land that comprised the immense Northwest Territory, a wilderness empire northwest of the Ohio River containing the future states of Ohio, Indiana, Illinois, Michigan, and Wisconsin. A Massachusetts minister named Manasseh Cutler was instrumental in opening this vast territory to veterans of the Revolutionary War and their families for settlement. Included in the Northwest Ordinance were three remarkable conditions: freedom of religion, free universal education, and most importantly, the prohibition of slavery. In 1788 the first band of pioneers set out from New England for the Northwest Territory under the leadership of Revolutionary War veteran General Rufus Putnam. They settled in what is now Marietta on the banks of the Ohio River.

McCullough tells the story through five major characters: Cutler and Putnam; Cutler’s son Ephraim; and two other men, one a carpenter turned architect, and the other a physician who became a prominent pioneer in American science. “With clarity and incisiveness, [McCullough] details the experience of a brave and broad-minded band of people who crossed raging rivers, chopped down forests, plowed miles of land, suffered incalculable hardships, and braved a lonely frontier to forge a new American ideal” (The Providence Journal).

Drawn in great part from a rare and all-but-unknown collection of diaries and letters by the key figures, The Pioneers is a uniquely American story of people whose ambition and courage led them to remarkable accomplishments. “A tale of uplift” (The New York Times Book Review), this is a quintessentially American story, written with David McCullough’s signature narrative energy.
My Review:
To get the basics out of the way right off: this book is, as you would expect, well researched, well written, and well read. It is also an interesting look at a time and place I never thought much about--the first "westward expansion" following the Revolutionary War, into a part of the continent that I (west-coaster that I am) tend to think of as part of the East.
That said, the book's subtitle had me on guard from the start, on the watch for a kind of inherent racism that seems almost inevitable when writing about the "settlement" of places considered empty by Europeans, but which in fact are full of people. McCullough navigates that minefield reasonably well, though I think he could have been a little blunter about the ambiguity of the "American ideal." There is no doubt that the anti-slavery stance of the first settlers is laudable, along with the fierce determination and stamina with which they managed to get it written into law (as well as free public education, which is no small thing, though it's never clear to me if that education was extended to people of color). But.
While McCullough does delve into the ways that relations between the settlers and the Native Americans deteriorated--largely ruined by an idiot of a military man--he tends to gloss over the removal of the native inhabitants of the region to make room for that American ideal. While noting the irony that by the time the first settlers were dying of old age, the only thing left of the Indians was a fine collection of names for their former places, the author stops short of wondering how much that tarnished the nobility of the settlers. He mentions, but doesn't dwell on, the fact that the Indians were forcibly removed from their homelands. When we read of the slaughter of settlers and soldiers by Indians, the dead have names and histories. When the slaughter ran the other way, not much is said of the humanity of the dead.
My Recommendation:
The book is worth reading. The imbalance that I have pointed out is, I think, compensated by the glimpse into the changes that have rolled over this continent in the last 500 years. Still, I await the day when I don't have to go find a separate book to get the perspective of the non-whites in our history.
FTC Disclosure: I borrowed an electronic copy of The Pioneers from my library, and received nothing from the author or the publisher in exchange for my honest review. The opinions expressed are my own and those of no one else. I am disclosing this in accordance with the Federal Trade Commission's 16 CFR, Part 255: "Guides Concerning the Use of Endorsements and Testimonials in Advertising."
Enjoyed this post? Avoid missing out on future posts by following us.
audio books early US settlers non-fiction review US history