It felt like about time to write about the writing process again, not just about me! Though of course anything I say about the process is actually about me--about my process, which is by no means "the" process, or even one of the best.

Since my new Pismawallops PTA mystery is being proof-read, I'm moving on (sort of) to the next project--developing a new mystery series. Since the last time I developed a new series, rather than a new book in an existing world, is a fair ways back, I'm figuring out how to do that. I was going to say that I'm figuring it out all over again, but I remembered that when I wrote the first Pismawallops PTA book I didn't have an outline for the book, much less any sort of pre-developed world.

Since I also remember the mess that created, I'm trying to go at this one in a more orderly fashion. I've read a lot about how to develop your characters by thinking about their needs/wants/desires, how to develop setting, and so on. Playing with all these things might be a good idea, or might just be a way to keep moving forward a little bit while I continue to struggle with actual writing. I'm okay with it either way, because every bit of thinking and planning I do now will help, even the bits I'll toss out.

Yes, you read that right. I do believe that the brainstorming bits that end up being tossed are still valuable! Anything that gets the creative juices flowing is to be embraced and cherished, and I never know which bit that I thought was no good will come back and prove to be part of the story somewhere.

At this point, the process looks kind of like this:

You get the picture. The actual product at this point is a document with everything--at the top, my thoughts about the plot and setting, and below sketches of characters, biographies, and so on. This isn't too different from what I've done in the past, and now that things are beginning to take shape, I'm starting to work on that "question outline" I have used in the past: asking the big questions of who, what, when, where, why, and how, and scribbling answers until I see the form the story will take.

I've mentioned it before, and it's worth repeating: though I started as a pantser, writing mysteries has convinced me that I need a more structured approach, because there are too many things that *must* be right. Some of those I can fix in editing, but my life is a great deal easier if I got it close to right the first time. So, in the end, I have become a planner, though at times there are bit gaps in the outline with vague instructions like "chase red herrings for two chapters."

Since nothing in my brain works quite the same as it did Before, I'm leaning on all this planning and plotting to help me reach the point where I can write. I'm going to need all the supports I can give myself.

This is far from the first time I've written about this process, but since my take on it keeps evolving, I think it's worth revisiting--and it's worth looking at my earlier thoughts, since everyone's process is different! Here are the main earlier discussions of planning and plotting:

The first time was in Feb. 2013.  This post refers to a novel called "Murder Stalks the PTA." That evolved into Death By Ice Cream, the first of the Pismawallops PTA novels. That evolution was one of the things that convinced me the process I discussed in this post needed work. Up to that point, I'd been an unthinking pantser, taking the nugget of an idea and just jumping in and writing.

The second time was in September that same year, and I was starting to develop the outlining approach that I have more or less stuck to since, having struggled with the revisions of that novel.

When I took this photo I was mentally titling it "Portal to Another World," because that's what I thought the puddles on the road looked like. Maybe it's a good image for the writing process! 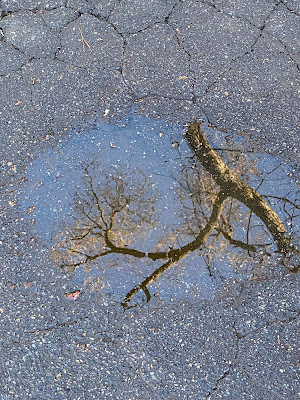