What could be more appropriate for Valentine month than Gustav Klimt’s  The Kiss?

This shimmery, early 20th century painting of a couple embracing in a patch of wildflowers has riveted art afficionados  across the world for decades.

Use this amazing painting to kick off  a romantic love story of star crossed lovers. Or maybe a much married pair who’ve been together for years. Of unrequited or lost love. Or any love of the other gazillion types.

For unValentinish souls, remember that there are kisses other than romantic ones.  The kiss of life, the kiss of death, the kiss of betrayal, the angels’ kiss in spring. The mystical thousand ways of kneeling and kissing the ground.

One golden artwork, a zillion directions to go. Pick yours and run with it. We’re cheering for you. And can't wait to see what you come up with!

That's the February challenge. And this is my response. I struggled a bit, until I remembered something my boys told me about their experience at 5th Grade "Outdoor Ed" at a camp near San Francisco.

“Do it! Do it!” All the kids were looking at him, chanting, as they had for every other camper in the group, “Do it! Do it! Kiss the slimy lips!”

Jordan looked from his campmates to the forest floor, hoping for some way out. Some way that wouldn’t mark him as a spoilsport or a chicken. Maybe it would be gone. It might have gotten away while they were urging him to pick it up.

“C’mon, Jord,” Callie urged. She was his best friend, but right now he hated her along with all the others. “You’re the only one who hasn’t. If you just do it, we’ll be the first team to complete the Banana Slug Challenge!”

The Banana Slug Challenge. Jordan winced. It meant a lot to the other campers. The first cabin-pair team to present photographic proof that every camper had kissed a banana slug would win the right to go first in line at every meal left in the week. That sort of thing mattered, especially with those bigger kids who always seemed to push ahead and get the best desserts.

Reluctantly, Jordan turned his gaze on the large, greeny-yellow gastropod at his feet. Of course it was still there. It was a slug. It couldn’t run away and hide. It probably didn’t know enough to run anyway. The slug wouldn’t care about what was about to happen. It was just Jordan who was grossed out by the thought of picking up a slug, let alone kissing it.

Not that it would be a real kiss. They’d all been coached on how to do it without hurting the animals. A little peck on the top of the head, avoid the antennae and the funny hole on the side of the head, if you could even call it a head.

Taking a deep breath, feeling Callie’s hand on his shoulder—was she pushing him or trying to reassure him?—Jordan slowly bent and ran his hand through the loose forest-floor duff. His scoop came up with the slug still resting on the mass of fallen redwood needles. He closed his eyes, then forced himself to open them. He’d had to look to make sure he got this right, or he could end up with a mouthful of banana slug. Definitely not what he wanted.

Hoping he wouldn’t puke, Jordan lowered his face to the unsuspecting creature in his hand.

Back at the camp, Jordan washed his mouth again and again, shuddering. He’d been fine until, not far from camp, they had come on a pile of horse poop with a banana slug nosing about for tasty bits. At least he hadn’t been the only one to puke.

The horror of that day would never leave him.

His lips rubbed almost raw, he left the bathroom when he heard the dinner bell, and began to run. He was a hero! They’d be first in line for dinner!

The life of a banana slug happens in slow-motion. Movement, dining, defense against predators—all depend on slime and patience, not speed or ferocity. And don’t even ask about mating, which can take all day. It might take half the day for a slug to decide if it will be male or female (answer: both).

The slug therefore hadn’t started or panicked when surrounded by large, noisy animals. It had simply continued to ooze along in search of the pile of delectable horse droppings it sensed lay somewhere nearby. Experience had shown that two-leggers left slugs alone.

The slug was dimly aware that the pile of duff it over which it slid was rising. The magnitude of the disaster became clear only when a vast face loomed in the slug’s view.

Then the slug would have fled at high speed, had such been possible. It made every effort to gather itself and writhe out of the way of the immense pinky-red arcs that curved closer and closer. Surely this couldn’t be happening. To be touched by such a disgusting creature, all dry and raspy and covered with neither fur nor the more sensible slime! The slug shrunk into itself, turned away, would have cried out if it had anything with which to produce a noise.

There was no escape.

The giant fleshy bits descended on the slug’s head, touched its skin. The slug was certain the touch would burn, leave a mark for all to see.

Then it was falling, along with the pile of duff it had rested on in security such a short time before.

The dreadful contact ended, the slug endured a new horror, the discovery of gravity.

Long after the loud, thumping herd of two-leggers was gone the slug lay there. When at last it dared to move, its body stretched out of the mess of dirt and redwood needles that had fallen with it, much of the forest detritus still clinging to head and back.

The horror of that day would never be forgotten, but life must continue. Slowly, cautiously, the slug began to move, gaining purpose and direction.

There was still that pile of horse droppings to be explored.

Banana slugs range in color from almost an olive drab to bright yellow, and some have black spots while others don't. I'm pretty sure the spots/no spots variations are regional--SF Bay Area slugs never seemed to have them--but the other shadings seem to have more to do with local conditions and what blends in well. The photos below all convey pretty accurate color. These are all my photos, all taken within 50 miles of San Francsico, accompanied by some fun slug facts.

Visit the WEP to see what others have made of this prompt!

©Rebecca M. Douglass, 2021
As always, please ask permission to use any photos or text. Link-backs appreciated.

Don't forget--my third volume of short fiction is out! Pick up your copy of Wizard Libraries and Dragon Archives for just 99¢! Smashwords  Amazon 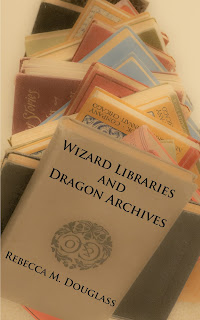 And pre-orders are open for Death By Donut! 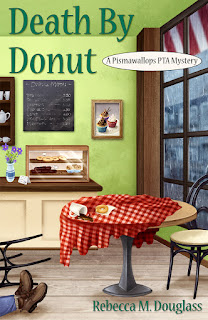