Non-Fiction Review: Destiny of the Republic 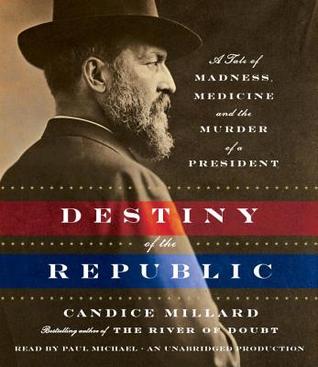 Title: Destiny of the Republic: A Tale of Madness, Medicine, and the Murder of a President
Author: Candice Millard. Read by Paul Michael
Publication Info: Random House Audio, 2011; 9 hours 47 minutes. Original by Doubleday, 2011, 339 pages
Source: Library digital resources
Goodreads Blurb:
James A. Garfield was one of the most extraordinary men ever elected president. Born into abject poverty, he rose to become a wunderkind scholar, a Civil War hero, and a renowned and admired reformist congressman. Nominated for president against his will, he engaged in a fierce battle with the corrupt political establishment. But four months after his inauguration, a deranged office seeker tracked Garfield down and shot him in the back.

But the shot didn’t kill Garfield. The drama of what hap­pened subsequently is a powerful story of a nation in tur­moil. The unhinged assassin’s half-delivered strike shattered the fragile national mood of a country so recently fractured by civil war, and left the wounded president as the object of a bitter behind-the-scenes struggle for power—over his administration, over the nation’s future, and, hauntingly, over his medical care. A team of physicians administered shockingly archaic treatments, to disastrous effect. As his con­dition worsened, Garfield received help: Alexander Graham Bell, the inventor of the telephone, worked around the clock to invent a new device capable of finding the bullet.

Meticulously researched, epic in scope, and pulsating with an intimate human focus and high-velocity narrative drive, The Destiny of the Republic will stand alongside The Devil in the White City and The Professor and the Madman as a classic of narrative history.
My Review:
The biggest problem with this story is that it's fact, not fiction, so the narrative arc just doesn't work as well as we'd like. The set-up is perfect: Bell's genius, Lister's new understanding of germs and infection, all coming together just in time to save the president's life, right? Only, as we know, it didn't end that way. That simple fact forced the author to work extra hard to give the story a point, in my opinion. She doesn't do too bad a job.

With or without a greater significance, and even though Garfield was assassinated before he could do much as a president (though Millard argues that Chester Arthur, after Garfield's death, worked hard to carry out Garfield's agenda), his life is impressive. The early part of the book, recounting his early years, is inspiring. The account of the world's fair where Bell introduced his telephone is likewise interesting. It came so close to being ignored. Had no one noticed it, how much longer would it have taken for the technology to take hold? I'm sure it was inevitable that it would be picked up sooner or later, but it's fun to speculate.
In our times, maybe the most important message of this book is the clear depiction of the consequences of a refusal to recognize science. Lister had already proven his theory and found acceptance in Europe. Had Garfield been shot in England, he might well not have died (it was sepsis, not the bullet, that killed him). But for whatever reason, the American medical community clung to their old beliefs and continued to spread death and disease. I don't think I need to elaborate. It was also enlightening to see how devious the politicians were, and how willing to subvert democracy for personal gain. Plus ça change...
Finally, one caveat: the descriptions of the wound and Garfield's infections are pretty graphic. I had to take it in small doses, and definitely no listening at dinner time.
My Recommendation:
The book is well-written and well read. Perfect for those, like me, who like to pick up stray bits of history for no good reason.

FTC Disclosure: I borrowed an electronic copy of Destiny of the Republic from my library, and received nothing from the author or the publisher in exchange for my honest review. The opinions expressed are my own and those of no one else. I am disclosing this in accordance with the Federal Trade Commission's 16 CFR, Part 255: "Guides Concerning the Use of Endorsements and Testimonials in Advertising."