This isn't really a proper review post, because my mind just doesn't seem to be working that way. But I've recently finished a couple of works of non-fiction, one audio, one on the Kindle, and at least have a few thoughts.

First, the books. Both were fairly random selections from the library's Overdrive collection, nabbed in something of a hurry for my road trips. As a result, the print book was read in snatches, the audio book with whatever attention was left after driving.

In general, for me the mark of a good work of history is that it makes me care about something I may not have known I was interested in. Both of these books managed that.

In print we have: 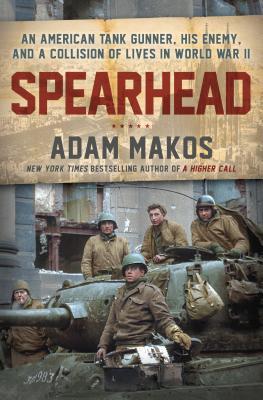 Title: Spearhead: An American Tank Gunner, His Enemy, and a Collision of Lives in World War II

From the author of the international bestseller A Higher Call comes the riveting World War II story of an American tank gunner’s journey into the heart of the Third Reich, where he will meet destiny in an iconic armor duel—and forge an enduring bond with his enemy.

When Clarence Smoyer is assigned to the gunner’s seat of his Sherman tank, his crewmates discover that the gentle giant from Pennsylvania has a hidden talent: He’s a natural-born shooter.

At first, Clarence and his fellow crews in the legendary 3rd Armored Division—“Spearhead”—thought their tanks were invincible. Then they met the German Panther, with a gun so murderous it could shoot through one Sherman and into the next. Soon a pattern emerged: The lead tank always gets hit.

After Clarence sees his friends cut down breaching the West Wall and holding the line in the Battle of the Bulge, he and his crew are given a weapon with the power to avenge their fallen brothers: the Pershing, a state-of-the-art “super tank,” one of twenty in the European theater.

But with it comes a harrowing new responsibility: Now they will spearhead every attack. That’s how Clarence, the corporal from coal country, finds himself leading the U.S. Army into its largest urban battle of the European war, the fight for Cologne, the “Fortress City” of Germany.

Battling through the ruins, Clarence will engage the fearsome Panther in a duel immortalized by an army cameraman. And he will square off with Gustav Schaefer, a teenager behind the trigger in a Panzer IV tank, whose crew has been sent on a suicide mission to stop the Americans.

As Clarence and Gustav trade fire down a long boulevard, they are taken by surprise by a tragic mistake of war. What happens next will haunt Clarence to the modern day, drawing him back to Cologne to do the unthinkable: to face his enemy, one last time.

My thoughts: (Note I'm not claiming "review" status for this).

With reference to my above comment on how to know if a history or biography is good, I can't claim I wasn't already interested in WWII. But I had no idea I cared about the tank war in particular, and in fact had never thought about the men who operated them. I had no idea there were so many in each of those tanks--they hardly look big enough for one or two crewmen, let alone a half a dozen. Makos brought those men to life, and brought home how young they were-- most of them around the ages of my sons, a sobering thought.

This was a good book to have chosen for reading, rather than listening, as there were lots of photos and maps. It would probably have been even better in print, where the maps are bigger and easier to reference as you read! 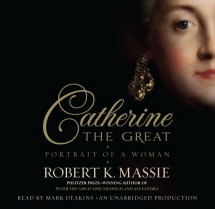 Title: Catherine the Great: Portrait of a Woman

The Pulitzer Prize–winning author of Peter the Great, Nicholas and Alexandra, and The Romanovs returns with another masterpiece of narrative biography, the extraordinary story of an obscure German princess who became one of the most remarkable, powerful, and captivating women in history. Born into a minor noble family, Catherine transformed herself into empress of Russia by sheer determination. For thirty-four years, the government, foreign policy, cultural development, and welfare of the Russian people were in her hands. She dealt with domestic rebellion, foreign wars, and the tidal wave of political change and violence churned up by the French Revolution. Catherine’s family, friends, ministers, generals, lovers, and enemies—all are here, vividly brought to life. History offers few stories richer than that of Catherine the Great. In this book, an eternally fascinating woman is returned to life.

This one really was something I wouldn't have gone looking for. If I knew there was a Catherine the Great of Russia, that was as much as I knew. I was predisposed to be attracted once I saw the book, because Eldest Son is studying Russian, but I'd never have gone in search of such a book.

It didn't take long to get me interested in the history, starting right off from the unexpected fact that one of the "Great" Romanovs wasn't even Russian, and was a Romanov only by marriage. On the other hand, since all the noble houses of Europe seemed to be related one way or another, it didn't seem to matter that much.

I was intrigued by the ways in which strong, intelligent women with a knack for leadership had to negotiate their times. The limitations on female power were real, and only partly went away when one was crowned Empress. If the book spends a lot of time talking about Catherine's lovers (and those of her predecessor, the Empress Elizabeth), it's because they had an outsized influence on the course of the nation's history for as long as each remained a favorite.

The structure of the book did sometimes confuse (the overall progress was from beginning to end of her life, but each chapter seemed to follow one thread for a long way, then the next would jump back), but in general the narration was easy to follow while my attention was on the road, and I credit both author and narrator for keeping me awake.

Give history a chance. Check out random books and learn about something you never knew happened.

FTC Disclosure: I checked the above-reviewed books out of my library, and received nothing from the writers or publishers for my honest review.  The opinions expressed are my own and those of no one else.  I am disclosing this in accordance with the Federal Trade Commission's 16 CFR, Part 255: "Guides Concerning the Use of Endorsements and Testimonials in Advertising."