Middle Grade Monday: The Other Half of My Heart (audiobook review)

- June 22, 2020
I'm not doing too well at reading real books right now. Mostly if it's words on paper (or e-ink), I'm re-reading comfortable old books. But I'm listening to a wider range of books. The Great Middle Grade Reads group on Goodreads was nominating books by Black authors for our July read, and I ended up adding most of the nominees to my TBR list. I've been listening to the ones that I can find at the library. The first was The Other Half of My Heart, by Sundee T. Frazier. 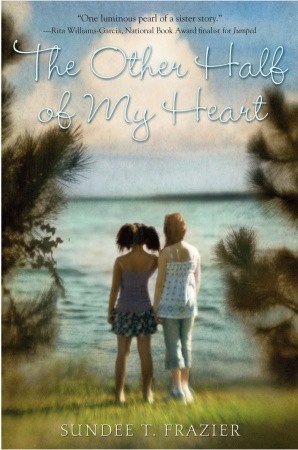 Publisher's Blurb:
When Minerva and Keira King were born, they made headlines: Keira is black like Mama, but Minni is white like Daddy. Together the family might look like part of a chessboard row, but they are first and foremost the close-knit Kings. Then Grandmother Johnson calls, to invite the twins down South to compete for the title of Miss Black Pearl Preteen of America.

Minni dreads the spotlight, but Keira assures her that together they'll get through their stay with Grandmother Johnson. But when grandmother's bias against Keira reveals itself, Keira pulls away from her twin. Minni has always believed that no matter how different she and Keira are, they share a deep bond of the heart. Now she'll find out the truth.
My Review:
This book is about race and blackness and the difficulties of a white person understanding the experience of a black person. But what makes it a good book is that it's also about the complexities of sibling relationships, the world of beauty pageants (oops--"Programs," as the organizers keep insisting: "It's not a pageant!"), and maybe even regional differences in the US.
What the blurb doesn't mention is that Minni and Keira live in Port Townsend, on the Olympic Peninsula in Washington State--about as far from the South as you can get, and not far from where I grew up. And I liked that what Minni sees as the most interesting thing about them isn't that they are a pair of bi-racial twins, but that they were born in their dad's airplane.
The story is narrated in the 3rd person, from Minni's perspective, and it is her uncertainly about where she fits that in many ways drives the narrative, because she looks white, but identifies as black--except... does she? That's the underlying uncertainly she feels, and the trip to the South clarifies a lot of things for her. In Port Townsend, she "fits in" and Keira is the odd one, the only black child in their classes, or their community. Minni thinks that the teasing she gets for her red hair and freckles (I identify with that, too!) allows her to understand her sister's experience, but she's forced to see that it really isn't the same.
And the pageant? The author isn't too hard on that, but she does poke fun (deservedly so, to this tomboy) at the culture of pageants, with the inevitable artificiality of at least some of the participants, and the over-involvement of too many of parents. Grandmother Johnson is another shallow (grand)mother, just wanting them to succeed to prove something for her... or is she? One of the many things Minni and Keira have to learn is that people are more complicated than they look from the outside.
My Recommendation:
This is a very good read, and is particularly timely right now. I wouldn't have minded a little more discussion from a feminist perspective of the whole pageant thing--the twins' mother sees it from there, but not much is made of it. But the questions of race, and of being an "ally," are very well presented, in my opinion. There are no easy answers, but the sisters' love is the thing that stands out.
FTC Disclosure: I checked The Other Half of My Heart out of my library, and received nothing from the writer or publisher for my honest review. The opinions expressed are my own and those of no one else. I am disclosing this in accordance with the Federal Trade Commission's 16 CFR, Part 255: "Guides Concerning the Use of Endorsements and Testimonials in Advertising."