Our second day in Antarctica, and we are finally going to set foot on it! Many of our shipmates had done so the previous day, while we were kayaking, but Dave and I hadn't yet been off the water. And we were going to start right off with a glacier walk, the longest shore excursion on offer (which mostly filled me with regret that I'd had coffee with breakfast, as one is to leave nothing, and they mean nothing, on shore. Nor is a pee bottle much help when you are in the middle of a rope team).
It didn't seem completely certain the night before that we'd be able to do this. While we cruised through the night (more or less in circles, as it turned out), the weather had been... imperfect.
Despite the snowy night, the morning was beautiful. Since we needed the most time for our outing we were the first to leave the ship. Looking back from across the bay it appeared very small! 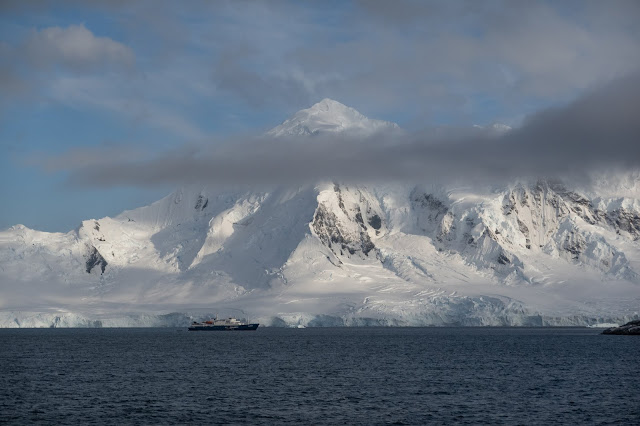 We disembarked on a little rock ledge below the glacier, where we could leave our life vests and pick up our snowshoes.

Eventually we were all ready: snowshoes (the spiked variety) on, a little practice walking in them, and roped up and ready to go.
We started up a fairly steep snow/ice slope, with little idea what was beyond. I was pretty impressed when we topped out!
The snow looked innocuous, which is why we had expert leaders--because they knew there were crevasses around, and knew how to spot them, even when covered, or mostly covered, with snow. With their guidance we moved safely over the ice and out until we really did have a feel for being in the wilds of Antarctica!

We had the pleasure of just poking around and taking in the scene some.
Looking across Port Lockroy (a research station, closed for the season) and Damoy Point (our afternoon landing is on the other side of that), to some really big peaks that I'm sure have names. 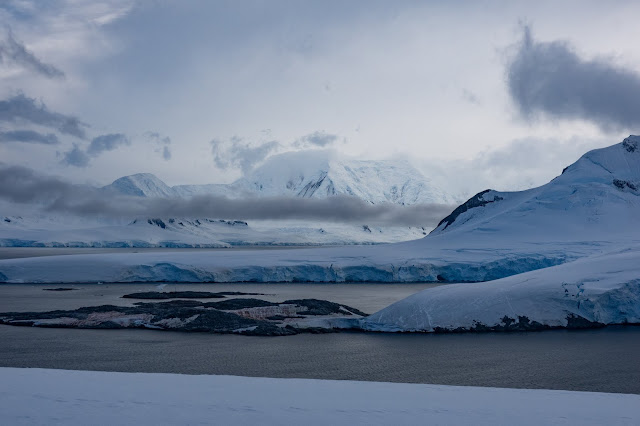 We enjoyed the fantastic weather, but the memory of the snow in the night kept me looking around. In the Antarctic, a change in the weather is always lurking about. 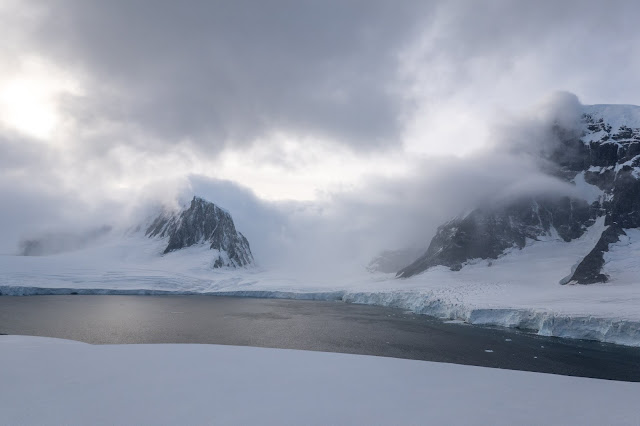 Back to the ship for lunch, then we were out again for a landing among the penguins, and an historic station. You can see why we all wore our ship-provided tall muck-boots every time!

The first thing I did was to check out the buildings. Since even the summers there (the only time such a station would have been manned) are pretty cold, it didn't seem terribly adequate, but way better than the earliest explorers had! This was used from 1974 until about 1994, as a stop for supply flights to research stations farther south. Note the huge urn atop the barrel stove--that would be for melting snow to make drinking water.
Then I went and enjoyed the penguins :)

This one was pretty far through the molt, but still not ready for the water.

I managed to be at the farthest possible spot when word came through to our leaders: the captain was ordering everyone back aboard, as the wind was picking up with dangerous gusts expected. I was in a good position to watch everyone stream back to the shore. The two buildings in the distance on the right are the old station, and the planes landed up on the ice on top of the ridge.

That's enough photos for today! Hope you enjoyed them, and see you next Friday for the next installment. My apologies to anyone who visited and found broken photo links. I have no idea what went wrong.

All images and text ©Rebecca M. Douglass, 2020, unless otherwise indicated.
As always, please ask permission to use any photos or text. Link-backs appreciated!