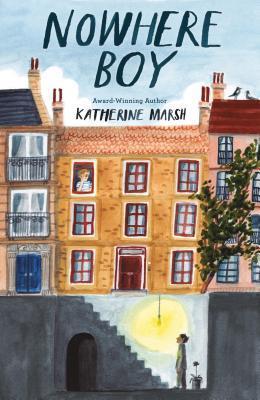 Publisher's Blurb:
Fourteen-year-old Ahmed is stuck in a city that wants nothing to do with him. Newly arrived in Brussels, Belgium, Ahmed fled a life of uncertainty and suffering in Aleppo, Syria, only to lose his father on the perilous journey to the shores of Europe. Now Ahmed’s struggling to get by on his own, but with no one left to trust and nowhere to go, he’s starting to lose hope.

Then he meets Max, a thirteen-year-old American boy from Washington, D.C. Lonely and homesick, Max is struggling at his new school and just can’t seem to do anything right. But with one startling discovery, Max and Ahmed’s lives collide and a friendship begins to grow. Together, Max and Ahmed will defy the odds, learning from each other what it means to be brave and how hope can change your destiny.

Set against the backdrop of the Syrian refugee crisis, award-winning author of Jepp, Who Defied the Stars Katherine Marsh delivers a gripping, heartwarming story of resilience, friendship and everyday heroes. Barbara O'Connor, author of Wish and Wonderland, says "Move Nowhere Boy to the top of your to-be-read pile immediately."
My Review:
Another of my impulse-borrows, I stuck this on my phone and started listening without a lot of thought. I was intrigued by the premise: the unhappy American boy and the refugee, both lost and out of place, and wondered how the author was going to pull it off. Soon, I couldn't stop listening.
At the start, Max's story reads like so many middle-grade misfit stories. He's unhappy about the move to Brussels (for which I kinda wanted to dope-slap him, because--living abroad!), and no one understands him. Literally, since he's attending a regular public school despite knowing no French. It feels almost trivial.

The contrast with Ahmed's story is so stark as to make me wonder, at first, if this could work. The cover illustration captures that perfectly: one boy living in sunshine and color and whining about it, and the other living in a grey world and trying not to despair. What impressed me was the way the author gradually brings those worlds together, never losing sight of the fact that Ahmed's world is not, and cannot be, like Max's, but allowing them to at least share some overlap. Some aspects of the way the story works out felt a little unreal and forced, but I appreciated that there was a lot of hope offered in the end, and Marsh manages to make it believable.

The audio narration was not bad, but I was bothered by the use of a French accent to depict passages where people were meant to be speaking in French. It felt wrong, because of course they were NOT speaking with an accent; they were speaking their native language. For some reason that bugged me. On the other hand, the frequent insertion of bits of French into the dialog were kind of fun, and hearing those aloud brought back my own French studies.

My Recommendation:
This is a thought-provoking story about friendship as well as about the treatment of Syrian refugees--and maybe other migrants seeking safety and a better life in other parts of the world? The book is well worth reading, however you do it. Suitable for children 9 and up. There are some distressing bits relating to war and terrorism, as well as the deaths of family members.


FTC Disclosure: I checked Nowhere Boy out of my library, and received nothing from the writer or publisher for my honest review. The opinions expressed are my own and those of no one else. I am disclosing this in accordance with the Federal Trade Commission's 16 CFR, Part 255: "Guides Concerning the Use of Endorsements and Testimonials in Advertising."
Belgium middle grade books middle grade review refugees Syria war