Middle-grade Monday: Dragons in the Waters, by Madeleine L'Engle 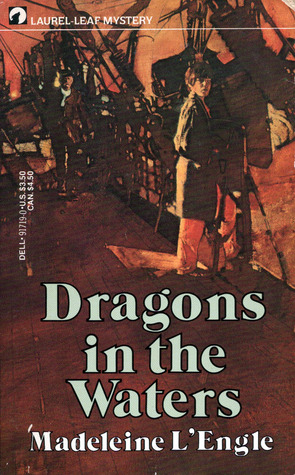 Publisher's Blurb:
A thirteen-year-old boy's trip to Venezuela with his cousin culminates in murder and the discovery of an unexpected bond with an Indian tribe, dating from the days of Simon Bolivar.

Thirteen-year-old Simon Renier has no idea when he boards the M.S. Orion with his cousin Forsyth Phair that the journey will take him not only to Venezuela, but into his past as well. His original plan…to return a family heirloom, a portrait of Simon Bolivar, to its rightful place&—is sidetracked when cousin Forsyth is found murdered. Then, when the portrait is stolen, all passengers and crew become suspect.

Simon's newfound friends, Poly and Charles O'Keefe, and their scientist father help Simon to confront the danger that threaten him. But Simon alone must face up to his fears. What has happened to the treasured portrait? And who among them is responsible for the theft—and the murder?

My Review:
The reason I'm writing a review of a book this old is because I got to thinking about cultural perceptions while I read. I have long been a fan of Madeleine L'Engle (A Wrinkle in Time, if you are trying to place the name). My feelings about her work have changed some over time, as I'm less interested in the religious aspects of the books, and more in a good yarn, but most of the books have stood the test of time and re-reading.

This book hit something that bothered me, and now that I think about it, it's a theme that runs through many of her "mystical" books. That is: L'Engle seems to have bought into something like the "Noble Savage" fallacy, an ideal of pure Native peoples living in a special harmony with the Earth that gives them powers of wisdom and healing. And that, to me, is just wrong.

I won't deny that many cultures may well have a better relationship with the Earth than your basic modern American. But the use of that trope by a white American writer ends up being disturbing, especially when I realize how consistently the thread runs through her work.

Now, L'Engle also likes to write pretty black-and-white good vs. evil stories, and I don't know if it's better or worse that she tends to have indigenous peoples (or in some cases, prehistoric peoples) who have either kept in harmony with the Earth and are wise and good opposed to others who have turned away from their traditional knowledge and become evil (i.e., not lumping ALL indigenous people's together, exactly), but I have to think that either she had a pretty poor understanding of other cultures, or was a little lazy at times, using a kind of short-hand instead of creating real people.

Okay, so aside from that, how's the story? Actually, pretty good. There's a nice little mystery, some kids doing did stuff and seeing more than the adults know they do (or sometimes, more than the adults see), and a little interesting history. The writing is good, and doesn't 'talk down' to its juvenile audience. Finally, she is also addressing an issue even more urgent now, that of pollution and the need for energy sources--and economic resources--that don't involve destroying the environment.

My Recommendation:
L'Engle fans should go ahead and read this--it fits into the long series of loosely connected books that descend from Wrinkle. But I'm not sure that I'd give it to kids, or if I did, I'd want to talk about the author's use of other peoples and other cultures--and about the environment, as well!

FTC Disclosure: I have owned a copy of Dragons in the Waters for ages, and received nothing from the writer or publisher for my honest review. The opinions expressed are my own and those of no one else. I am disclosing this in accordance with the Federal Trade Commission's 16 CFR, Part 255: "Guides Concerning the Use of Endorsements and Testimonials in Advertising."
middle grade books