- November 23, 2019
Yes, I know, Photo Friday is happening on Saturday this week. I've been very busy writing that new novel! This will probably be the last of the reports from New Zealand, freeing me to start in on the travels we've done in the US since returning!

As we made our way up the North Island to meet our flight home from Aukland, we were able to explore one of the most striking New Zealand landscapes: Tongariro National Park. Picking just enough photos for a blog post was very, very hard.

New Zealand's oldest National Park, Tongariro is also a World Heritage site preserving Maori culture. We would look into some of that later. For our time in the park, we merely tried to be sensitive about hiking around a mountain sacred to the Maori people (Ngauruhoe). The Tongariro Northern Circuit, most of which we hiked, starts out between Ruapehu and Ngauruhoe, and circles the latter. Part of the hike, along the northern side of Ngauruhoe, is also part of the insanely popular Tongariro Crossing, which has justifiably (but regrettably) been touted as one of the best dayhikes in the world. As a result, even in the late-season when we were there (April), the crowds on the Crossing are dismaying.

Our departure was delayed for a day by high winds, which closed the high saddle over Red Crater, intended to be part of our first day's hike. We were able to cobble together a trip going the other direction, starting a day later, however.

We started under clear skies, though the wind was chilly. A mile or two brought us to the impressive Taranaki Falls, where the creek drops off the edge of a lava flow.
Not far from the falls, we caught up with the front, and the sun and wind changed to... snow and wind.
About ten miles brought us to Waihohonu Hut, where we could watch the sun set on both Ngaurahoe and Ruapehu. The views, combined with the amenities of the very new hut, made this one of the two best we stayed in during our whole time in NZ.
Not surprisingly, the night was cold (the hut, however, was fairly warm, thanks to an efficient wood stove). In the morning, everything was frosted (including the steps up to the outhouses--watch out!).
The ground that had been wet from the storm the previous afternoon froze. In places, long, delicate crystals formed under the surface, pushing the outer layer of dirt aside.

The next day's hike was quite a bit shorter, but the views started as soon as we'd climbed out of the trees, and they basically didn't stop. We topped out the ridge above the hut and enjoyed the sweeping view of Ruapehu (which at the time we thought might be our last). 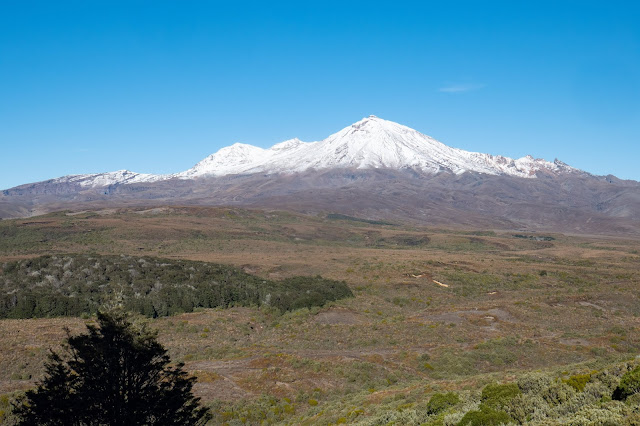 After dropping through a beautiful forest (where we were protected from the wind on that frosty morning, and the birds were singing--something we didn't hear much of on this tramp), we climbed another ridge, and began crossing the vast moonscape that surrounds Ngauruhoe on at least two sides.
The hike was shorter in miles, but the scenery and the ups and downs through the volcanic landscape meant it still took us all morning. We reached the Oturere hut in time for lunch, and to be almost the first to arrive, as most people were hiking the other direction (and thus had a much longer and harder hike).
In an effort to beat the dayhikers who would be climbing over Red Crater on the Tongariro Crossing (as many of 5000 in peak season; we would count about 1000 that day), we started as soon as it was light. That also meant hiking though an other-worldly landscape under low morning sun.
As the sun rose, so did we, drawing ever closer to the steaming vents at the saddle by the Emerald Lakes. 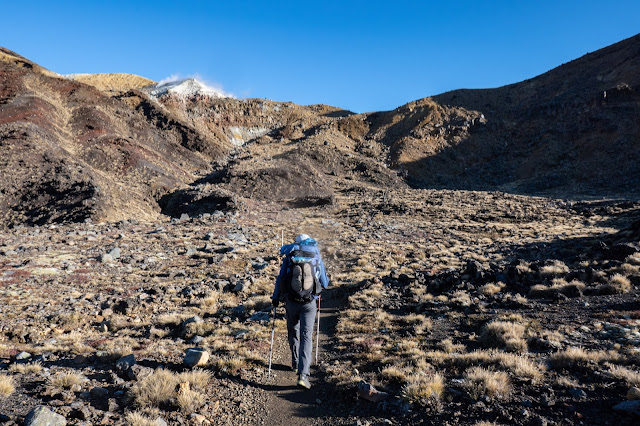 A detour to the Blue Lake, a kilometer off our route, had us approaching the mountain and the Emerald Lakes across a lava field.
The Emerald Lakes lived up to their names, turned brilliant green by the minerals washed out of the steam vents. They are sacred, so are not to be swum in, but it would be foolish to do so in any case (due to the minerals), as well as probably destructive of their beauty.
We finally summitted Red Crater not long after the first wave of (most fit and/or most early-rising) dayhikers arrived. It would have been nice to be there ahead of them, but we couldn't quite do it.
Looking NE, we could see past the Blue Lake to the much larger (and lower) Lake Taupo, sometimes called the Tahoe of NZ. You can just make out water and islands beyond the hill. 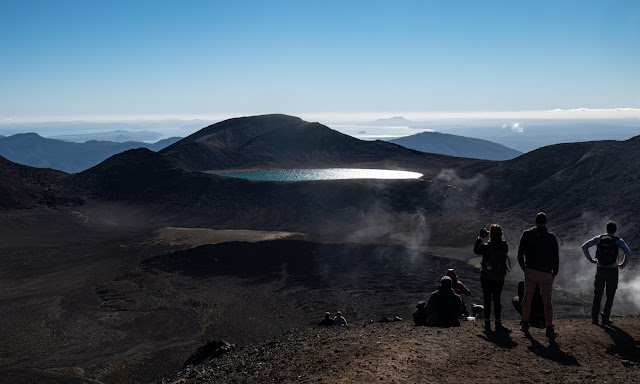 Heading down the other side, we had ample opportunity to note how many of the people struggling up were probably in over their heads. The signs in the outhouses do their best to filter out those people and prevent the need for rescues (an effort that keeps the number of rescues to... two per week).
By the time we were getting near the Mangatepopo hut (and a half hour beyond it, the car park where we hoped to pick up a ride), the shuttles had long since dropped off their last passengers, and we had the track more or less to ourselves again. That gave us the chance to contemplate the minerals turning the water on this side of the mountain red-orange, rather than green. 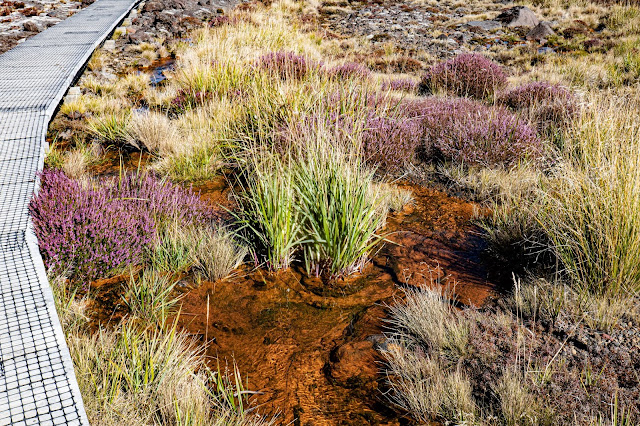 The end of a long hike. 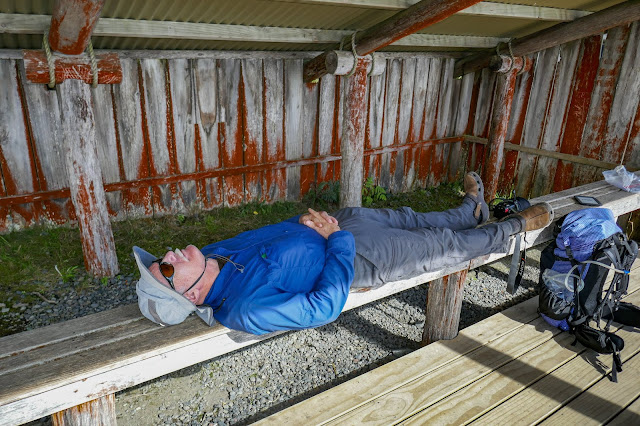 We had to wait a little while, but found some hikers willing to give us a lift back to our car. Another six miles of walking would have taken us there under our own power, but somehow our feet said no.


I'll leave you with a very hopeful sign! There are too few places in NZ (and thus anywhere in the world) where you might need a warning sign about kiwis crossing the road. We didn't see or hear any where we hiked, but it's good to know they are out there, in the more kiwi-friendly parts of the park! 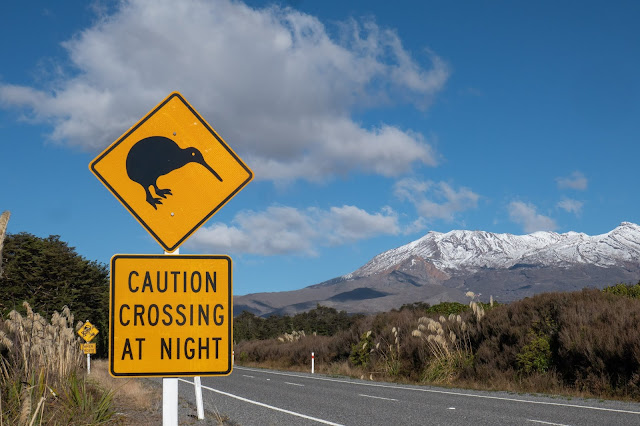