- October 18, 2019
At some point in our recent wanderings I realized we'd hit the high points in three states--the literal high points, as in the highest peaks.

I wrote about climbing Wheeler Peak in Great Basin National Park a couple of weeks ago. It's not absolutely the highest point in Nevada, but it is the highest peak entirely within the state (the high point of Nevada is Boundary Peak, and the border with California runs right over the summit of that one). So I'm calling that my first state high point.

A week or so later, we were backpacking in the Presidential Range in New Hampshire and I had the realization that it would be only a little farther, and a lot less descending (though it would be a bunch more climbing, that was less daunting to either of us than climbing back down the very steep and rough trails we'd climbed to our hut) to go to the summit of Mt. Washington. Since only one of us could do that, I descended to the car and drove up Mt. Washington to pick up my husband. As a veteran mountain driver, I wasn't all that impressed with the hype about the scary road, but the views from the summit were great.

From the summit of Mt. Washington I could see back to Mts. Adams (left) and Madison where we'd been the day before. You could also see the two easy ways to get to the summit--the road and the cog railway. 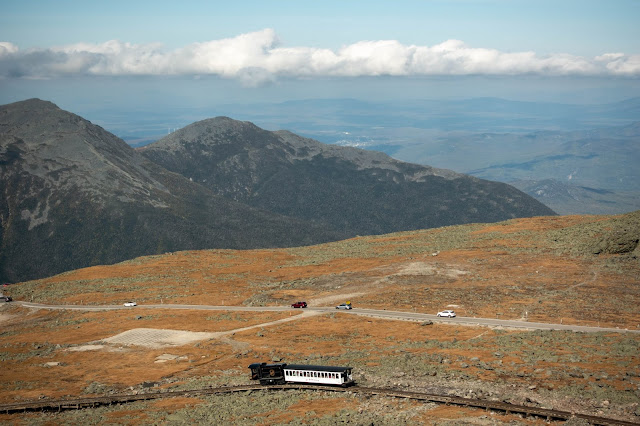 I like trains, and the cog rail is pretty cool. Each car has an engine that pushes it up the mountain, literally on a cogged track to keep it from slipping backwards (or from running out of control when descending). Tourists were pouring off the train cars to stand in line to take their pictures with the summit sign. We passed on that rite.

Another week later, we hit our third and most challenging high point: Mt. Katahdin in Maine. We started from the Roaring Brook campground at first light, pretty much (6:30 a.m.), and took on arguably the most challenging route: the Helon Taylor trail to the "Knife edge" with a return via the Cathedral Trail to Chimney Pond (more on that later).
A light overcast came and went, muting the fall colors (which were a bit short of their peak in any case). In the distance is Traveler Mountain, which we climbed last year. 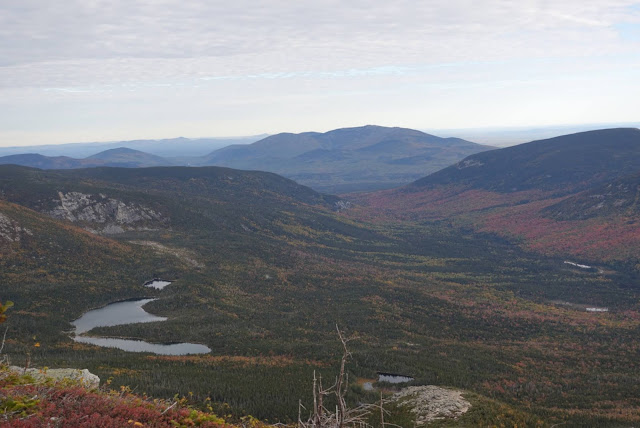 Our route will follow the ridge on the left and up. The actual summit is one of the lower-looking bumps to the right, I think.
I find I didn't take many photos of the "interesting" bits. My husband got a few of me scaling things that made me a bit uncomfortable, but for the most part, despite the intimidating looks, the knife edge wasn't bad.
Katahdin is a popular climb. It is also the northern terminus of the Appalachian Trail, and with the park closing in 2 weeks from our visit, people were pushing to finish during any window of good weather (like the day we climbed, as opposed to the next day which was cold and wet). They have more cause to celebrate the summit than we do--or to regret the end of a 6-month's journey.
As they say, it ain't over until it's over. We had to get down, and our trail wen right down that middle ridge, mostly over the bump at the end and off the other side. The descent was brutal, and occasionally terrifying. It was fun at first, but before we hit flat(ish) ground and a real trail it had definitely stopped being fun. 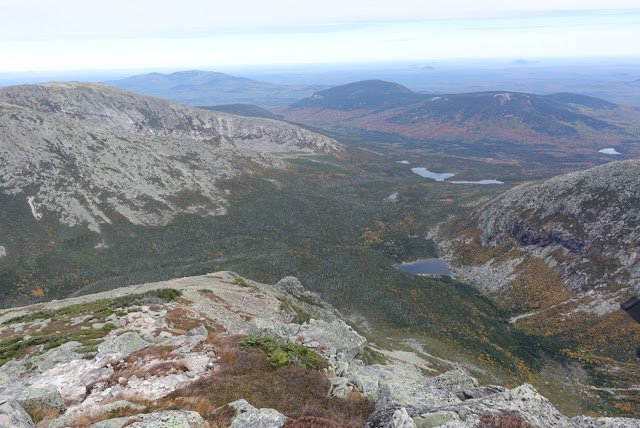 Pretty much the universal reaction to our choice of trail down, both by those we met who were going up and by some we spoke to after was, "You came DOWN the Cathedral trail???! No one goes down that." We understood why.
I don't think we'll be launching a "50 summits" venture anytime soon. But it was fun to check out the high points in a few states, and I'm glad to have climbed Katahdin.
And now... back to writing!
©Rebecca M. Douglass, 2019
As always, please ask permission to use any photos or text. Link-backs appreciated!
hiking Katahdin Maine Mt. Washington New Hampshire photos