- September 02, 2019
The latest installment in my reports of our adventures over the last year. This is part of the 4 months we spent in New Zealand (January through most of April) this year. We spent most of the time on the South Island, and I've covered most of our outings there. This is a trip my husband and I did on North Island, after our son went back to the US to finish his final term of college.

Mt. Taranaki is the primary feature of Egmont National Park (est. 1900). Named Taranaki by the Maori, and Egmont by Captain Cook, the mountain is a perfect cone, at least from a little distance, reminiscent of Mt. Fuji.

We arrived on a drizzly morning, driving out of decently fair conditions down below into the cloud that shrouded the mountain from a few hundred feet below the Visitor's Center. We had toyed with the idea of climbing the mountain, but the dubious weather combined with the 5000' climb (and descent) put us off it. Instead, we chose to hike the Pouakai Circuit, a loop along the base of the peak and through a sub-range on the north side.

Our trailhead was a bit below the VC, and we began by hiking steeply up, so we did start the trip in the rain.
After an hour or two of scrambling up a rough and muddy trail, the weather began to clear.
That change in the weather came as we topped out the primitive track (a re-route as the primary route to Holly Hut was closed due to a major slide). Within minutes we were seeing the mountain as the clouds vanished. Part of what we saw was a coating of fresh snow, making us doubly glad we weren't planning a summit attempt.
Despite our post-lunch start, we reached our night's lodging, Holly Hut, in good time. In an indication of how late we were getting in the hiking season (as if the snow weren't a good enough clue), we shared the hut with only 2 other parties: a lone woman and a father with 2 teenaged sons. Since the hut had 3 bunk rooms, we all had private quarters, though we shared the comfort of the main room with the wood stove going full-blast to dry our boots.
We had a very short hike the next day, but we were up early to catch first light on the mountain.
We took advantage of the short hike to our next hut, and started the day with an hour's round trip to Bells Falls, because you can never see too many waterfalls.
Eventually, we put on our packs and started the walk to the next hut. First we crossed the Ahukawakawa Swamp. Though some clouds flirted around us, we continued to have great views back towards the mountain. A boardwalk through the swamp protected the landscape from hikers, as well as giving us dry feet for a change. 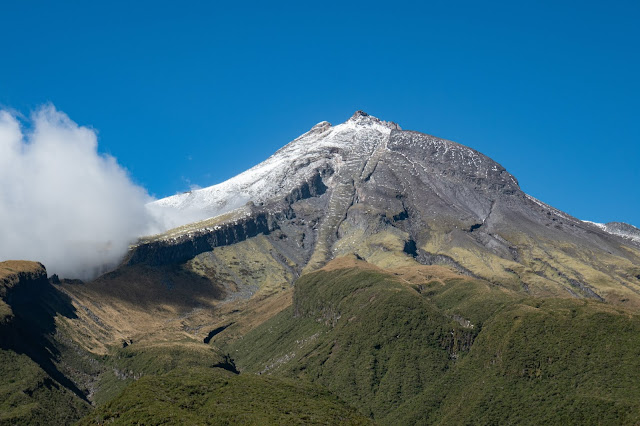 Once across the swamp, we had to climb up the Pouakai ridge. Again, the track was well-engineered, as much to protect the resource as to make our lives easier. We learned that a few years earlier, a group of volunteers had constructed several kilometers of boardwalks and stairs along the ridge, transforming the track from a muddy trench that in places was shoulder-deep, into a pleasant hike. 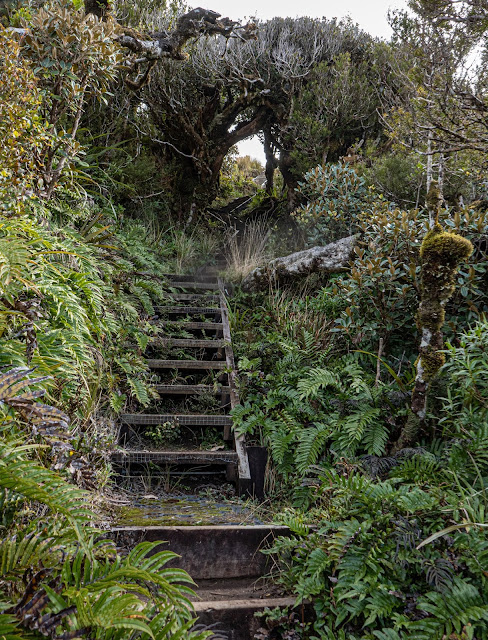 After an hour or so of climbing, we topped out on the ridge near the hut. With lots of time, we did some extra exploring along the next day's route, to catch our scenery while we could, weather around the mountain being decidedly unstable. 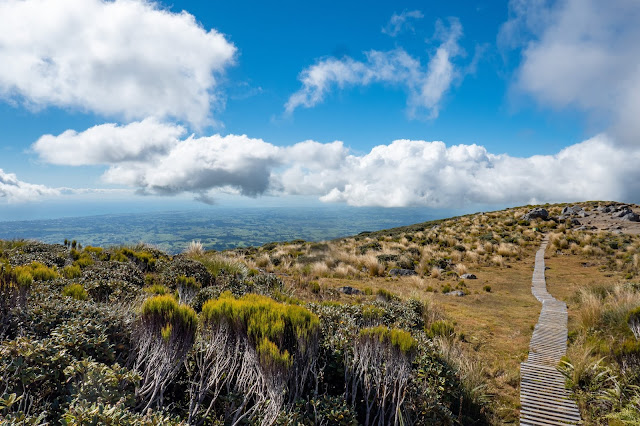 Twenty minutes from the hut brought us to a small tarn, famed for photos with beautiful reflections. Since the wind was howling pretty enthusiastically while we were there, we settled for shots of the mountain with ruffled water.
A final trip to a viewpoint after dinner gave us our last looks at the mountain as the sun set.

Meanwhile, back at the Pouakai Hut, we watched the last light vanish over the Tasman Sea while our dinner cooked.
Next morning, sure enough, the window of great weather had closed. Our route followed the ridge for some distance, doubtless a path of breath-taking views under other circumstances. For us, it was a matter of enjoyed the cool conditions and the small things: the smell of the tussocks when wet, a drop of water on a blade of grass, and the beautiful, beautiful boardwalk that kept us out of the mud!


After the trail took us over the summit of Henry Mountain (no doubt for the views, but the route seemed gratuitously up and down in the drizzle), it dropped precipitously back into the forest and continued down.
By now we were mostly wanting to get to the car, get dry, and go buy a meal somewhere in town. But there was still time to appreciate the beauty of the bush.
Finally arrived at the final swing bridge, one we'd crossed two days before as we headed out. Another hike nearly in the bag, and I could smell those fries!
Taranaki didn't have quite the level of endless spectacular views many of our tramps had, but despite wet gear and muddy boots we were glad to have done the hike. Although several parties were at the hut on Pouakai ridge, none appeared to be going our way, and we hiked each day without seeing more than one or two other hikers, a rare and much-appreciated circumstance in a New Zealand we felt at times has been utterly overrun by tourists.
©Rebecca M. Douglass, 2019
As always, please ask permission to use any photos or text. Link-backs appreciated!