- September 04, 2019
It's the first Wednesday of the month, and that means IWSG post! But before I get to that, I have a real treat: not one, but TWO cover reveals! One is mine, one for fellow blogger and IWSG member, Jemima Pett.

The 9th book of Jemima's Princelings of the East series is coming Nov. 14, and as usual, Danielle English has made a gorgeous cover: 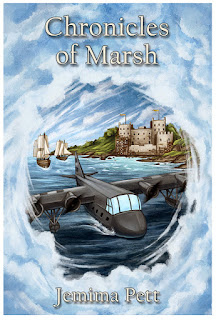 The book is currently on schedule for release on November 14th. Pre-order at  iTunes , Kobo, and B&N right now.

The Princelings of the East are now King Fred and Prince Engineer George. Gone are the years of innocence when they travelled for adventure and uncovered time tunnels and pirate plots. Now Fred, assisted by his queen, Kira, has the responsibility for his people, his lands, and for persuading the lords and kings of the Realms to act together for the common good. George just has to work on his inventions, always thinking of a final goal: to fulfil the promises made to Lord Mariusz so long ago.
Neither has an easy task.

Fred decides to write a history of his reign, starting with the joy of his inheritance, and documenting how technological progress is not necessarily the key to communal good.

Chronicles of Marsh is book 9 of the Princelings of the East series, and fills a gap between previous books and the final one, Princelings Revolution. It takes us from Fred’s first days as king, to the loss of the latest and most promising flying machine, a period of 8 years. The pressures of modern life will be familiar to readers, even if the princelings world doesn’t have the internet or mobile communications… yet.

Lovers of the series will enjoy these adventures, but newcomers may find it easier to start with book 1, book 5, even at book 7. It’s a fantasy sociological and technological adventure in a world not quite like ours, suitable for age 10 and upwards.

###
And the second cover reveal? My own! Death By Library, Book 4 in the Pismawallops PTA series, is scheduled for release Dec. 6. My cover is also by the talented Danielle English, and I couldn't be more excited about how it turned out! 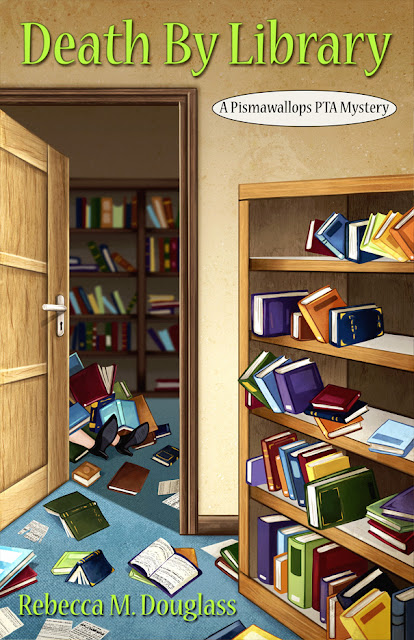 E-books available for pre-order at Smashwords, Kobo, iTunes (Apple Books, and I can't figure out how to find a link), and B&N right now. And now on Amazon, too!
JJ McGregor and the Pismawallops PTA are back in action! JJ has a new job at the library, which allows her to pay her bills. That ought to make her happy, but with all those books to shelve, the PTA to run, and a 16-year-old son to raise, there’s never enough time to spend with her sweetheart, police chief Ron Karlson. That’s especially true with Thanksgiving on the horizon and her mother coming to visit, not to mention the PTA’s Holiday Bazaar looming ahead.
The PTA has to swing into action in a hurry when a grumpy member of the school board threatens plans to build a badly-needed swimming pool on the island. His objections turn out to be nothing compared to the claims of a stranger who says the land the pool would be built on is actually hers. The board meeting dissolves into chaos, and JJ leaps into action in an effort to get to the bottom of the incipient land war.
Before JJ can find what she needs in the reference section, things turn deadly in the library stacks. Now JJ needs some answers fast, before she loses her job—or her life. She’s determined to find out everything about the victim, and for once the library doesn’t hold all the answers. JJ and Kitty may have to face the ultimate peril: a visit to Mrs. Halsey, the oldest—and crankiest—person on the island, where they may learn more than they bargained for.
Whew! Now for the IWSG post.

This month's question is: ​If you could pick one place in the world to sit and write your next story, where would it be and why? Remember, the question is optional!
I've been having a pretty good month as a writer. The final word-smithing on Death By Library  has been going well, and I feel like sometimes I'm even reaching a new level of quality prose :)  A release date has been set, and I've booked a blog tour. I've also kind of come to peace with not blogging as regularly as I've done for the last 5 or 6 years. I just don't have the time, and I'm not as interested in writing reviews, which was starting to feel like both a rut and a chore.

I even got the nicest note from a reader last week (she knows my Mom, but she didn't have to say anything, so I'll take it as sincere), saying that she read Death By Ice Cream in 2 days, putting it down only for the essentials of life! Now, that's praise worth having.
With one book almost done, my mind has turned (without waiting for permission) to the next book, with ideas for the story bubbling up and me scribbling notes as fast as I can. I shouldn't really start the next book in the series so soon--I have too many other projects clamoring to be started/finished. But it's the book that's yelling loudest, so it'll probably happen.
Now for the question: I am rather appreciating being able to sit at my own lovely big desk-top computer and write at home, after doing it in make-shift places all over the world for the last year. Fantastic settings don't make me want to write--they make me want to hike. So I'll say either home, or a nice coffee shop (there's a decent one around the corner from us--that'll do).
How about you? Write at home, or head to an exotic locale to tickle your brain waves?
#IWSG #PismawallopsPTA cover reveal Death By Library