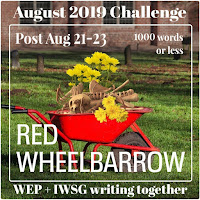 Squeaking in under the wire, here's my entry for the August WEP (Write, Edit, Publish) hop! I've put a wheelbarrow in, but that's definitely not the title of my story, which is kind of a work in progress, as I let time slip away from me.
I'm open to any level of critique; I may revise this and try to do more with it if I'm inspired :)

One more load, Ilya told herseolf. One more load, and you can sit down in the shade for a few minutes. The unrelenting sun beat on her like a hammer as noon approached, bleaching whatever color there had ever been out of the summer landscape. Out of the everything.
The wheelbarrow that hauled Ilya’s firewood—what irony that, firewood when the mercury tickled the top of the long thermometer—had once been red, but like everything else, the color was long since faded to something mockingly like rust. No rust where there’s no water, Ilya reminded herself. In this climate, there was just color, drained away.
Drained away like all their hopes. Like Jacob’s life, sucked away by the dust that got in his lungs and no amount of coughing would dislodge.
That’s all water over the dam, was her message to herself. Water over that damned dam that had lured them in and never materialized.
“The damn dam,” she repeated aloud, and laughed. There were some compensations to living alone. No one to be shocked that while doing the work of two men, she’d learned to cuss like one. And there was that home-brewed beer in the cellar. She’d learned to make it because Jacob liked it. When he died, the unused bottles had sat in the cellar, until the water in the well fell so low that she’d drunk it in desperation. Now she made a batch every year, grew the hops herself, and when the well water grew warm and tasted richly of the algae that grew in any still water, those cool bottles in the cellar were a treasure.
Dry-land farming had never been their plan. There were to have been canals and irrigation ditches all over, creating a verdant paradise here on the bench so high above the river. The man who sold them the land sold an entire vision with it, but only the scorched dirt held any reality.
She’d finished the last load, pushing a barrow of sticks up from the thicket where the creek ran in the winter. Ilya stacked the wood and went into the house, down to the cellar.
In the cool dim of the cellar she stood a moment and let the heat and weariness of the day drain out of her. In the cellar she could almost remember the winter.
Winter. It was the winters that kept Ilya from leaving, trying her luck elsewhere, however difficult it might be. Life returned with the first rains of autumn. When the snows locked her into her cabin, she began to live again.
Ilya leaned against the cool earthen wall of the cellar, remembering. That first summer, when she had so longed to leave, to return to… no, not to that. But to leave, certainly. Only Jacob had kept her on the farm. For love?
She no longer knew if she had ever loved Jacob. She had gone with him when he asked, too grateful for what he did for her to care where he took her. She had stayed with him, and then with the homestead, from that same gratitude and, yes, perhaps it was love, that feeling that to abandon his homestead dream was to abandon Jacob himself.
By now, there was little of Jacob left about the homestead, and it wasn’t his dream that kept her there. It was fear.
Fear that if she left, she wouldn’t know what to do.
Fear that if she went back, she would know too well what to do.
Anyway, it was only in the summer she wanted to leave. Soon the fall rains would start, and she would come to life again, just like the plants that had turned brown and blown away under the sharp sun.
In the fall, Ilya worked with a will, and the creek returned to life.
But winter. It was winter that kept her there, more than fear, more than need. Winter, when the snow trapped her in the cabin for days and weeks, and no one could come near. When the creek might freeze, or might run swift, deep and icy.
Winter, when at last she was safe.
Winter, when her heart was at rest.
###
©Rebecca M. Douglass, 2019
As always, please ask permission to use any photos or text. Link-backs appreciated!
#WEP flash fiction