- August 02, 2019
After driving the long way around from Christchurch to Te Anau (documented here and here), We launched into the 3-night, 4 day, 33 1/2 mile Milford Track tramp. Possibly the most famous track in New Zealand, this requires a lot of planning and advance booking--a year or more in advance. In fact, we had intended to do it first thing back in January, but a tiny delay in booking the huts meant we got late February instead. As it happened, that was a good thing: the January attempt by others in our party was rained out, while we enjoyed fine weather, at least where it mattered. The participants were my husband, Eldest Son, Friend B, and myself.

The trip begins with an hour's boat ride up Lake Ta Anau; the start of the Milford Track isn't accessible by road (neither is the end, come to think of it). There are two or three boats per day; we were on the last boat, which was well-filled with those who would become our fellow trampers. A note on that: many of the Great Walks in New Zealand have parallel hut systems, for those doing Guided Walks (catered, allowing them to hike with just daypacks), and independent walkers (like us), who carry all their food and gear. The piles of packs on the boat were neatly segregated.
The first day's hike is only about 3 miles, so our late start wasn't at all a problem. The track on that day is an easy walk up the Clinton river to Clinton Hut.
Most of the day's walk was in the forest, but a short side-trip took us into a marshy area, where we could not only see more of the peaks around us, but also some interesting plants, including the carnivorous sundew.
The independent-walker huts on the Milford Track sleep about 40 people. Since everyone must have a hut reservation to hike the track, they are full, but not overflowing. The biggest issue is that in a bunkroom with 20 people, there *will* be at least one snorer. Some of us employed ear plugs, while my husband ended up finding that the best sleep was to be had in the common room or even on the deck.
The early sun and blue skies combined with tantalizing glimpses of the valley and peaks ahead.
By noon, however, it was back to clouds and drizzle. But even that was scenic, as the mountainsides began to flow with countless waterfalls and cascades. 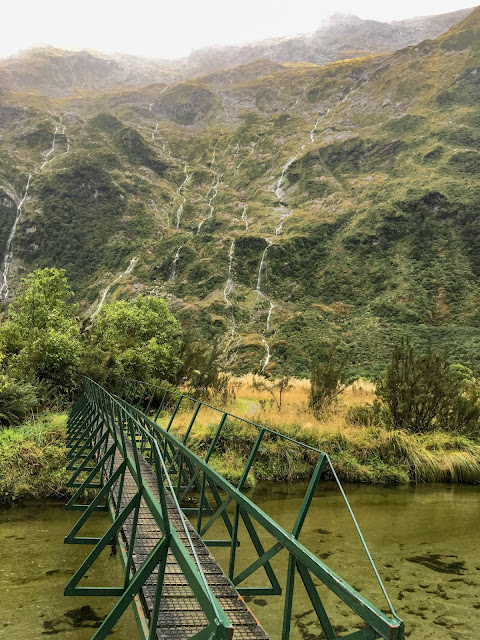 The second hut, Mintaro, was well draped in drying gear and boots, but with a fire inside we were toasty. And when the rain stopped (before sunset), we found we were being visited by a family of wekas, chicken-sized flightless birds with a tendency to explore and snatch anything left unattended.
Morning found us with more sun than cloud, and we made an early start in hopes of getting over Mackinnon Pass (the high point of the track in more ways than one) before the weather shifted again in the afternoon.

The well-engineered track sometimes left me wondering if it was too engineered. The trees tapped to support this swing bridge probably would agree. I was happy not to have to ford the river, though.
We topped the pass early, with the sun still burning through the mists.
My husband and I climbed a ways up the peak on one side of the pass (he went much farther than I did because I'm not crazy). The view back down showed clearly why the track doesn't go right through at the low point, but in fact follows the ridge line into the background before dropping across the face of the distant peak.
Near the high point there is a shelter, the 6th in that location (the others have literally blown off the mountain, as the saddle funnels very high winds through).
There are regularly spaced "long-drops" along the track (the huts had flush toilets), including at the Mackibbon shelter. This one sported a window in the door so occupants can appreciate what was advertised as the best view from any long-drop in NZ. Might even be true.
Dropping into the valley of the Arthur River, the track had to be even more engineered in places. 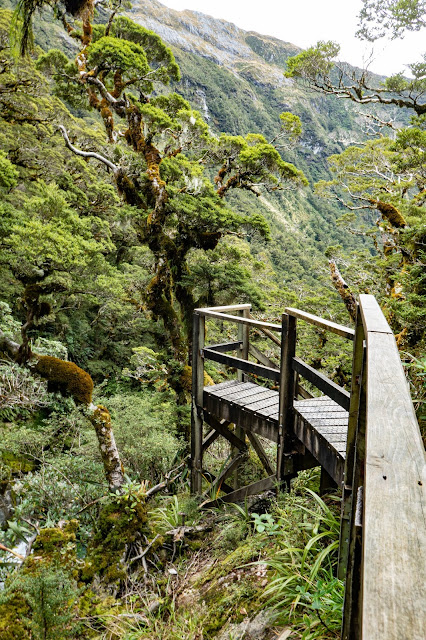 Because the day wasn't already long enough (11 or more miles, with the large climb and descent), nearly all the trampers take a 2-mile side trip to see Sutherland Falls, at 580 meters the highest in New Zealand, and by some standards the 5th highest in the world. It was worth the detour, though we barely reached the hut in time for dinner (which we had to cook ourselves, of course).
The 4th and final day, hiking from Dumpling Hut to the landing at Sandfly Point was 11 miles, but once again we were hiking mainly on the flat valley floor. Because of our schedule (needing to catch a water taxi by 1 p.m. to catch a bus at 2), we made a very early start, and hiked briskly. That allowed us to do much of the distance in the pleasant early morning hours.
Because we hadn't already seen enough waterfalls... you can never have too many.
An occasional climb on the way downriver was more refreshing than tiring. This bit of trail was blasted out of the hillside above the river. 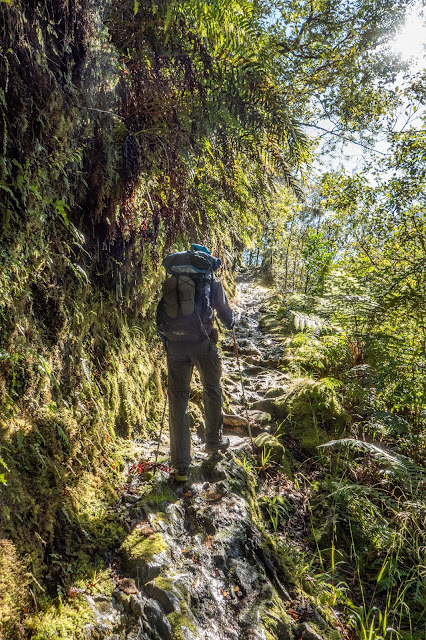 As a result of our early start and diligent hiking, we reached the landing with an hour to spare for the noon boat. With time to eat lunch and clean up, we were ready for our taxi when it arrived. By that time about 4 other hikers had arrived, at least one a women with a recent knee replacement who had worried she wouldn't reach the landing in time for the last boat at 4 p.m. 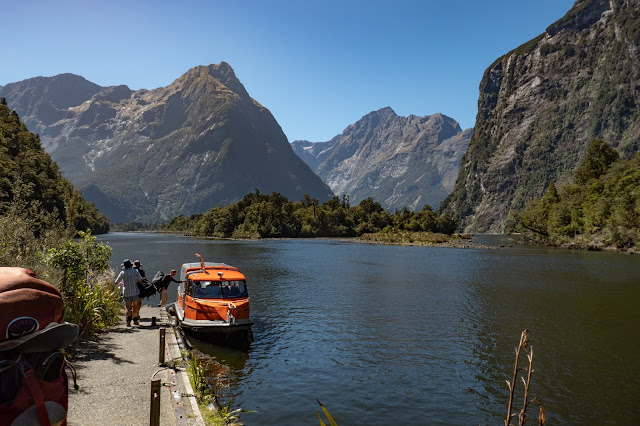 The Milford Track is one of the world's most famous walks, and justifiably so. The scenery was glorious and the track well designed. But for us, in many ways, it was the people on the track that made it most special (not something I usually say about a hike!). From the pleasure of taking Friend B on his first backpacking expedition to our awe at a family 8 and 12 year old kids who were doing the track as part of a year-long trip around the world, to a Chinese-American family from New Jersey learning the hard way how to backpack, we found no lack of interest in the people we saw each evening in the huts. I'm often skeptical of trips that require booking a year in advance, but this one was worth it.