- July 26, 2019
Back in late February, we did a trip from Christchurch down the east coast of South Island all the way to Invercargill, then up to Te Anau, the launching point for our Milford Track tramp. I've picked a few highlights from the trip south, into an area that gets a lot less attention than many parts of the island. We weren't sure what we'd find, but we found more than enough to fill our 4 days! On this trip were my husband and me, Eldest Son, and our son's friend, whom I'll call Friend B.
Part I of the trip is here.

The Catlins (Cathedral Caves, McLean Falls, Petrified Forest, Slope Point)
The Catlins is the farthest-south region of South Island, encompassing both the Catlins Forest Park and some amazing coastline with a few hidden gems. We stayed two nights in Fortrose so we could spend an entire day exploring. Since at least two stops were dependent on the tides, we had to time things carefully.

I ended last week's post with Cathedral Caves, so we'll pick up with the rest of the Catlins.

The weather was scheduled to get extremely windy and wet for the time we were in the Catlins, so we booked an AirBnB in Fortrose, at the Pukeko Inn (the "inn" part was closed, but we were able to rent the whole house very reasonably). The storm didn't materialize, but the place was comfy, and provided a nice base for our Catlins adventures.

McLean Falls was a short hike from the trailhead, and a popular spot for that reason (also a very short drive from Cathedral Caves).
Of course, being in the neighborhood, we had to drop in on the southernmost point of the island. Not of the country--Stewart Island is just to the south. Still, that would be the closest I've gotten to the South Pole. 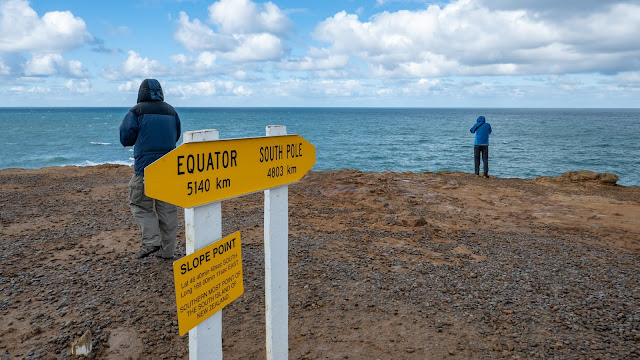 One last tidally-driven stop was the Petrified Forest. Unlike the one in Arizona (which I've also visited), this one is under water more often than not, as the trees have eroded out from a tide-washed bench.


Gemstone Beach and Clifden Cave
Eldest Son's "Friend B" really wanted to see the famous New Zealand glow worms. We looked at a tour of glow worm caves near Te Anau, and while they looked truly spectacular, they also looked expensive and constrained. A little research brought me to Clifden Cave, an undeveloped cave open to anyone who is willing to do a bit of crawling and clambering to follow the marked route through. And if the glow worms weren't as extensive as at Te Anau, they were free, and ours to discover with no guide. Here's a quick tour:
No big challenges, except one pool we had to inch around, but you do have to be willing to crawl into places!
I didn't have the camera gear to get photos of the glow worms in the dark. This is what the sticky strands they use to capture their prey look like. The glow is at the top of the strand, and is meant to attract flying insects. 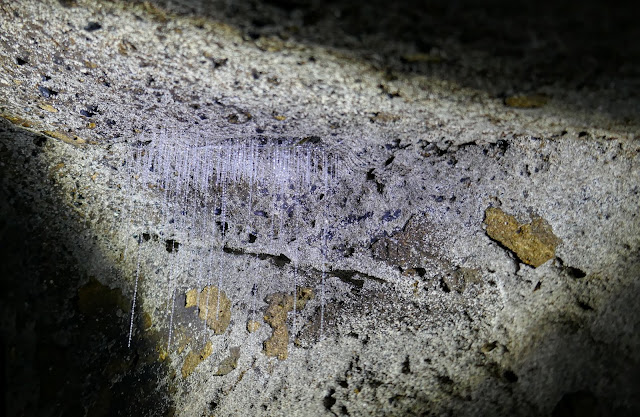 To my sorrow, we found that there are jerks everywhere. A fair number had left their mark in this beautiful cave. I can only say: Don't. Just don't. No natural feature is improved by the addition of your stinking graffiti!
This was the second, and much easier, puddle area. It was shallow enough to see the bottom, so those of us with already-wet feet waded in. Eldest Son managed the corner with grace and dry feet. 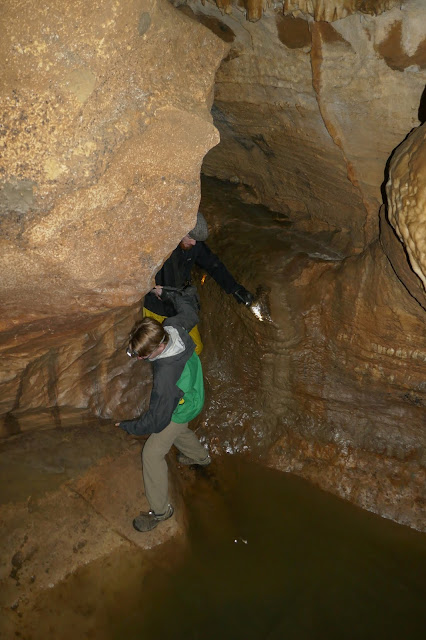 Friend B emerges into the light of day once more, totally happy with the experience. Also happy not to have to duck any more. 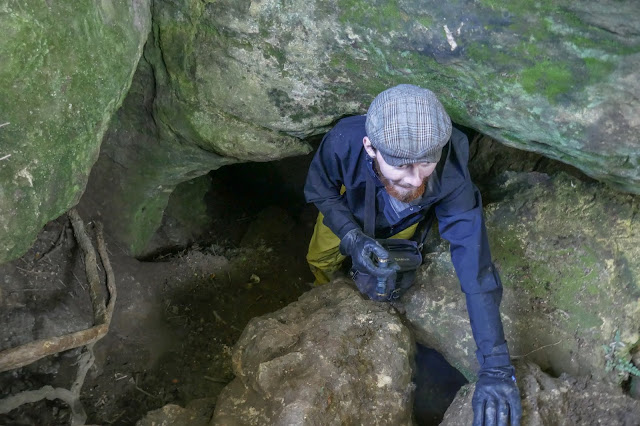 We made one other stop en route to Te Anau, Fjordland, and the Mildford Track. Being in urgent need of a haircut (as Click and Clack would say), we pulled off somewhat randomly at Gemstone Beach. The stones weren't real gems, but they were polished by the Tasman Sea and beautiful. And we could see the mountains of Fjordland across the bay.
Those mountains are among the most inaccessible in the world, I think. The very high rainfall of the SW corner of NZ means that the vegetation is thick, the mountainsides are steep, and the rivers can run fast and deep. Few trails and no roads penetrate the coastal range.
Next up: Milford Track!

©Rebecca M. Douglass, 2019
As always, please ask permission to use any photos or text. Link-backs appreciated!