- July 05, 2019
It's been a while since I got out a photo post, but I haven't forgotten that I've a bunch of trips and sights still to share! I also realize I still haven't shared a couple of other trips we did before this one, including the Milford Track, but since I've started here, I'll do this and get back to the others.

Our visit to Abel Tasman National Park on the northern end of the South Island of New Zealand (got all that? :D) was a special one. We broke from our standard hiking pattern, as well as from the huts, and rented kayaks and reserved spaces in the beach-front camping grounds. The three-night, four-day trip involved two days of kayaking, then two days hiking back.

Abel Tasman is probably the most heavily visited of New Zealand's national parks, with as many as 5-7000 people on the water, beaches, and trails on a peak-season day. I could see why (and was glad that we were a bit off the peak).

On the drive north from Christchurch, we spent 5 or 10 minutes waiting while this crew figured out how to get their very oversized load around the curve at the end of the one-lane bridge. New Zealand driving has its own challenges! 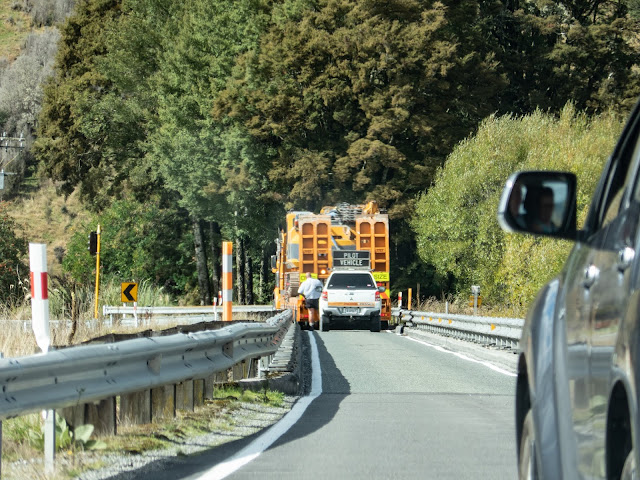 After getting into camp in Marahau just at dark, we grabbed a quick dinner and a night's sleep. Our trip began early on the first day, with a quick orientation from the rental company, and an even quicker on-water test to see if we could paddle the kayak.
A second attempt went better, and we passed our on-water test and headed out with food and gear for 4 days loaded into the boat.
The route up the coast included several islands that serve as nesting and resting areas for birds and seals, as well as for kayakers unused to spending long stretches in the boat. We were happy to reach our first stop on Fisherman's Island, both because we needed to get out and because our long crossing of Sandy Bay was a bit more wind-blown than was comfy for rank amateurs just starting out. We enjoyed wading in the water, as ocean temperatures were mild and the day warm.

A short time later, we stopped at Adele Island to enjoy a snack, the bird life, and a little psyching up for the "Mad Mile" we'd have to traverse to get to camp.
Going to launch the boat again on the lee side of the sandspit where we'd stopped, we discovered just how heavy that boat full of food and gear was. Happily, we were able to team up with another couple who'd stopped there, and four of us managed to drag the two boats over to launch.

The Mad Mile proved well within our ability, and we soon landed at our night's lodging. The campsite at Te Pukatea was small, so it had a wilderness feel we got nowhere else in the Park.
We had time for a walk before dinner, and a 2 or 3 mile loop took us to visit the giant, bustling campsite at nearby Anchorage.

Day two saw us back in the boat early. The idea was to do the paddling in the mornings, before the wind picked up in the afternoons, and it worked especially well the second day. We enjoyed cool temperatures and calm water (especially appreciated when we were doing our awkward landings and launches).

Our route to camp 2 was not that long, so we had plenty of time to explore some beautiful lagoons on the way. Happily, Sandfly Bay didn't live up to its name, and we enjoyed the calm water.
Bark Bay had another large campsite on the sandspit, but we paddled farther in and enjoyed the quiet, making it back to the entrance just in time to avoid an awkward portage over the bar! 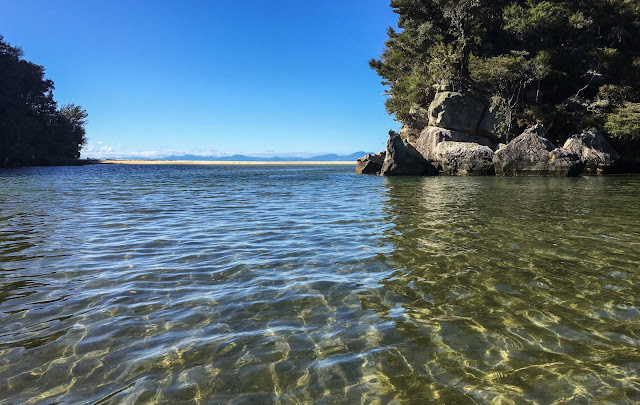 Another hour of paddling, and we rounded Foul Point and crossed more open(ish) water to circle Tonga Island. The law said to keep 5 boat lengths off to protect the seals and birds, but that was close enough to enjoy the wildlife. The rocky shore didn't exactly beckon for a landing in any case! Finally, after our longest span in the boat, we drove right in to Onetahuti Beach for our camp, and managed our most graceless landing yet. My bum had gotten so stiff sitting on the hard kayak seat and pushing the rudders that my legs wouldn't work right! I narrowly avoided taking a swim right there (which wouldn't have been that bad except for the embarrassment. The water was nice, but there were too many witnesses).

This campsite was quite a bit larger, and much busier, though we got there before most people (in time for lunch) so got our choice of tent site.
After lunch, the water taxi came and hauled away our boat. It was feet from here out.
Again, we took the afternoon for a modest hike, following the Abel Tasman Track on to the north until we reached a viewpoint that allowed us to gaze off into eternity. We caught a glimpse of the long sandspit that is the northwesternmost bit of South Island. Beyond that, continuing in a straight line, you might just catch the north end of North Island. If you missed that, you'd keep going until you ran into eastern Siberia.
The main track is pretty much a highway, complete with some fantastic bridges.
The Onetahuti campsite is well-used, and the wekas (chicken-sized flightless birds with a taste for people-food and trouble) know it. Here and the next night, at Anchorage, pretty much anything that wasn't nailed down and zipped in was subject to theft by weka. We speculated that there must be quite a bit of trash in the woods around the camp, because we stopped several thefts from other peoples' camps, and were unable to stop several more. Most of what they took wasn't edible (like our map, which we got back).
The next morning saw us loading our packs and hitting the trail/track in the more usual way. We still wanted an early start, since even with the season shifting on towards fall it was plenty warm at mid-day. In any case, the light is best early and late.

It was interesting to walk back along the coast we'd paddled. Particularly fun was crossing the high bridge and taking the trail around the back of the lagoon at Bark Bay.
We bypassed the chance for a 4-mile RT detour to Cascade Falls (by this point in our NZ trip, we'd seen a LOT of waterfalls!), but dropped our packs and took the shorter trip to Cleopatra's Pool. Lots of folks dayhike there from Anchorage after boating in, so it wasn't a solitary spot. If it had been, I'd've been skinny-dipping in there! 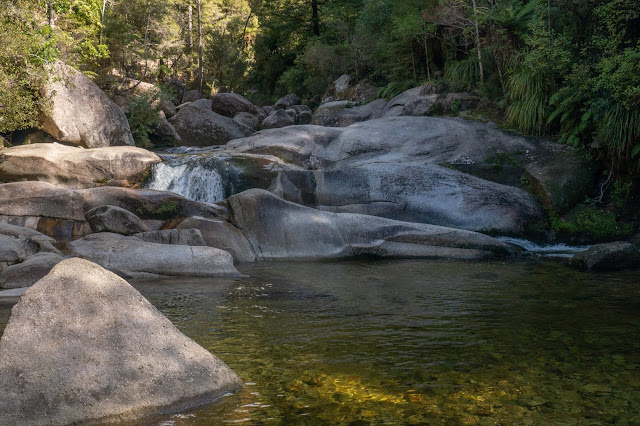 Even with the detour, we managed to reach camp by early afternoon, and were able once again to pick a site with a water view. It was a bit of a madhouse for much of the day.
Once the last water taxis left, however, things got a lot quieter and we enjoyed a peaceful night--aside from periodic weka attacks, which fortunately ceased with darkness. In the morning, the beach which had been teeming the previous afternoon was utterly deserted when we started off at 7. 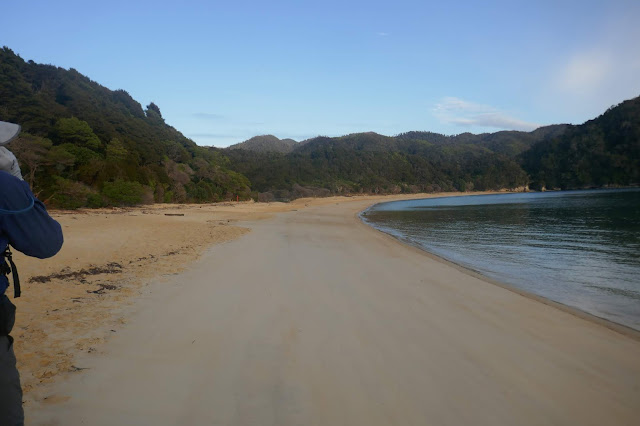 For a coastal walk, we found that the track did a lot of climbing and descending. One of the biggest climbs was up from Anchorage (the other biggest was just before dropping into it at the end of the previous day), but the view back was worth it.
The last day's hike was the least scenic, but it was still worthwhile as we circled above one cove after another. Nonetheless, we were happy to reach the trail's end (or beginning), though we had to flip a coin to see who'd walk another 3/4 of a mile to get the car (actually, I volunteered, as my husband was having foot issues). 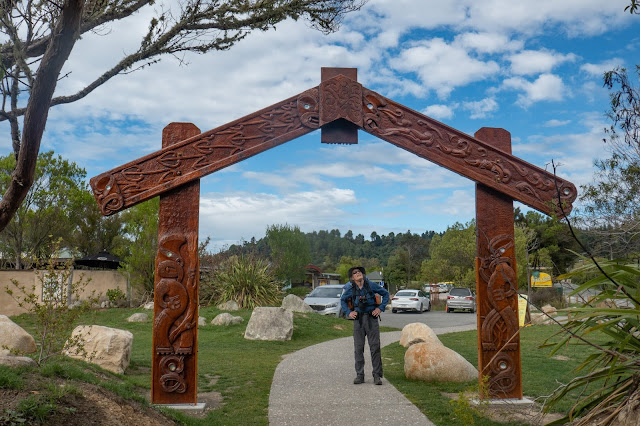 Another trip successfully concluded! The kayak rental included showers at the end of our trip, even though our boats had been returned two days before. So we were able to eat lunch in a civilized manner before driving to Picton to catch the ferry for the North Island.
©Rebecca M. Douglass, 2019
As always, please ask permission to use any photos or text. Link-backs appreciated!

By the way, don't forget to check out the Smashwords Summer/Winter sale for great bargains on my books and thousands more!
Abel Tasman National Park kayaks New Zealand photos tramping in New Zealand