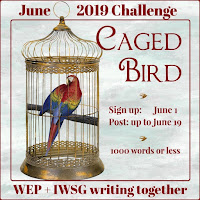 Note that the rules have changed a little. Since we now have a posting window that ends on the 3rd Wednesday and we don't sign up on the list until the post is live, I'm aiming for the 2nd Wednesday, which I didn't make, but I'm close.

1. CREATE your entry for the JUNE challenge – CAGED BIRD.
2. EDIT your entry, making sure 'WEP' is in the TITLE
3. PUBLISH your entry onto your BLOG or FACEBOOK page by the date shown - state feedback preferences
4. SUBMIT your name to the list below when your entry is live
5. READ other entries, giving feedback as requested
6. SHARE THE CHALLENGE on social media.
PLEASE NOTE: ENTRIES CLOSE JUNE 19
ALL GENRES WELCOME except erotica - 1,000 words maximum
FURTHER ENQUIRIES VISIT www.writeeditpublishnow.blogspot.com and leave a comment or: email: laura.gene.walker@gmail.com or olgagodim@gmail.com
I had a little fun with this one. When I started putting the story together in my mind I was driving, and couldn't check the prompt, so what I remembered was the old (very old--1899) song about a bird in a gilded cage. I looked up the lyrics and they pretty much matched what I remembered of them, and my story went on from there.

A Bird in a Gilded Cage

Clara ran a hand over the edge of the grand piano, paused a moment, and crossed to the Victrola. She put on the record, an antique disc from her girlhood. "She’s only a bird in a gilded cage,” the singer crooned.

She remembered how they’d laughed at the song, she and her friends in that giddy year when they all “came out” together and took the social scene by storm. Every one of them knew her duty, and no poor boys need apply. Anyway, they didn’t want to be poor, so they’d laughed at the pathetic song of the misguided girl who’d married for money, and set about corralling the richest men they could find, young men preferred, but old men had more money.

A decade later Phoebe, Sarah, and Fannie hadn’t been laughing. They had married rich men and lived to learn that riches didn’t last, but marriage did. Or, in Fannie’s case, just like in the song, that a man could make his wife’s life a misery and it was perfectly legal.

“You’re so lucky,” Phoebe had sighed each time they met, at Clara’s beautiful home, or in a fancy restaurant at her expense. Pheebs and Sadie weren’t unhappy, though. Riches passed, the marriages remained, and each seemed to have found a kind of peace with her man.

Old and grey as she was, Clara still carried much of the beauty of her youth. Where Phoebe and Sarah had aged poorly, forced as they were after their husbands failed and decided to try farming to work too hard, too often outdoors, Clara stood straight and elegant. She protected her skin from sun and wind and hid her wrinkles well.

For all that, Clara knew more than any of them about what could go wrong with a marriage, but she had continued to laugh off the song, to insist that the money was the thing.

Fannie... Fannie had stopped them all laughing for a long time. After her brute of a husband had finally gone beyond cruel words and hit her, Fannie had made sure he would never hurt her, or her children, again.

Fannie hadn’t been subtle. In those days, there was no mercy for a wife who stabbed her husband with his own sword cane, not even when she appeared in court still bearing the scars of his beatings.

She spent the rest of her life in prison, though she might eventually have been pardoned if she hadn’t died of influenza instead. Phoebe and her husband took Fanny’s children. Clara had paid off their father, who didn’t really want them anyway.

Meanwhile, Clara made her own plans. Her husband might have lost his money had she not canceled his orders to pursue some very shaky investments. And when he grew angry at her “interference,” never mind that she’d saved him from a very sharp operator indeed, she had given him only the one chance. One raised hand.

It had been the society story of the year: rich financier dies of heart attack at the peak of his success. Beautiful young widow left mourning. That sort of thing.

Clara’s father hadn’t believed in educating girls, but he hadn’t been able to stop her reading. Clara read everything. When her brother went to medical school, she even read his texts.

And she remembered everything.

No, it hadn’t been so hard to keep the door of her gilded cage open. Clara had found it comfortable, especially as a rich widow. She hadn’t been foolish enough to marry a second time. Why should she? She had all the money she needed, and the skills to make it grow. She remained a leading light in upper-class society, and her entertainments were the most sought-after honor of the town.

She let the Victrola wind down. Her gaze traveled around the elegantly appointed room where she received visitors, on to the room where she conducted business. She thought of the closets full of clothes, carefully selected for every occasion, and not a one of them comfortable.

An ironic smile twisted her lips as she set the record to playing again.

It didn’t take a man to make a cage. How had she failed to realize what a trap she’d made for herself, following all the rules?

All the rules but the one, the powder in his coffee.

At least it had been her own cage all these years.
###
©Rebecca M. Douglass, 2019
As always, please ask permission to use any photos or text. Link-backs appreciated!