- June 07, 2019
Somehow the computer is trying to tell me that this is Saturday already. I guess it may take a while for me to get back to knowing what day of the week it is! I also found that I never edited these photos, so it was more work than expected to put together even this quick and dirty photo post. Hope you enjoy it anyway!

Our trip to Nelson Lakes National Park was a 2-night, 3-day outing pulled together somewhat at random as we needed to get out of our Christchurch rental (it was a long-term AirB&B rental, but at the time we booked someone else already had those days). We found a description of the Angelus Hut hike somewhere, it looked good, and we were able to book it, so off we went.

The drive up from Christchurch was fairly long, so we didn't try to hike that  day. Instead, we booked into a site at the DOC (Dept. of Conservation--kind of like the US Forest Service) campground at St. Arnaud on Lake Rotoriti. Weather and sand flies were both mild enough to allow for outdoor cooking and relaxing, which was nice.
There was a large fire burning only a short way north, near Nelson, so the view over the lake was hazy. 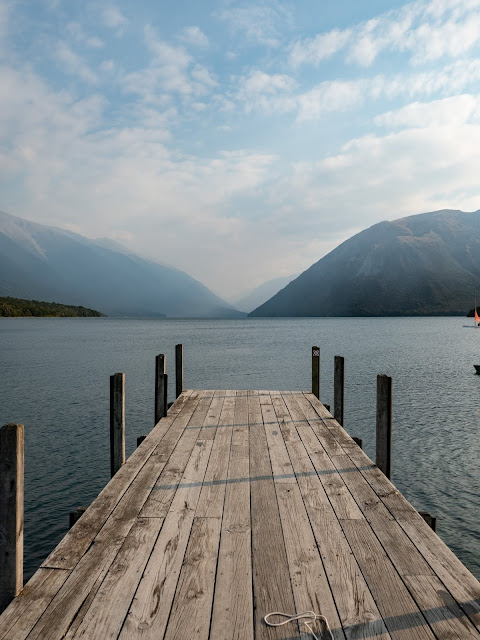 It was a little clearer in the morning, but you can still see smoke. Happily, the ridgetops seemed to be out of it.
We packed up quickly in the morning to try to beat the heat on the long climb up from the trailhead to the ridge (happily, the TH proved to be farther up the mountain than we feared). The route began in the welcome shade of a typical South Island beech forest.

Soon we broke out above the trees (above bushline), which made it hotter, but gave us a hint of the view-fest the hike would be.
Once we topped the ridge, the track had its ups and downs, but the climb was basically over and the vistas alpine and stunning.
The alpine landscape looks bare at times, but a closer look reveals plenty of vegetation. This mound plant is known as "vegetable sheep" for reasons that may be obvious. (In the photo above, you can see some lounging on the rocks to my husband's right). (Is "vegetable sheep" redundant? Sheep aren't much more than vegetables, as far as I can tell).
After about 7 miles, we finally saw the hut below us. The spectacular setting is why this hut requires reservations all summer and fall, though we were able to get 3 bunks on fairly short notice, so it's not as impacted as the "Great Walks," which must be booked months in advance.
The day and the water were warm enough for a refreshing dip in the smaller pond (in foreground above). After that, we did what you do in a hut: relaxed. For some of us, that included locating and assembling the hut jigsaw puzzle. This one was in better shape than most, having a box with photo that matched and missing only 3 or 4 pieces. The view from the window was distracting, but we persisted.
Next morning the threatened weather had arrived.
The wet and windy (very windy) conditions made the ridge route unappealing, especially as with the clouds down you'd get no views. Fortunately, there was an alternative route, about the same length and down in a valley so more sheltered.
When we started, it was windy and wet enough for jackets, and the visibility was poor enough to make us glad to see the frequent bright orange track markers. Once over the ridge, however, it was warmer and drier, though the trail was rugged.
Wet weather allows you to see things you might not when it's dry. In this case, a slug (which apparently is common enough, at least in that part of the island, but was the only one we saw).
By elevenses it was almost dry, if you squinted just right. We were glad to be able to sit on the covered porch of the Speargrass Hut.
The rough descent gave me some serious knee pain, but we survived, and were interested to see evidence along the way that the predator removal program is working (NZ's predators are introduced and invasive; the goal of eradication by 2050 is a desperate effort to preserve what's left of the vulnerable bird populations). I'll spare you the photos.

Back in St. Arnaud, we found a cafe to serve us lunch #2, and I was excited to see the largest Little Free Library I've spotted so far. I'm not sure if it was specially built or a repurposed phone box (which is what it looks like), but in any case, it's good to see books alive and well! 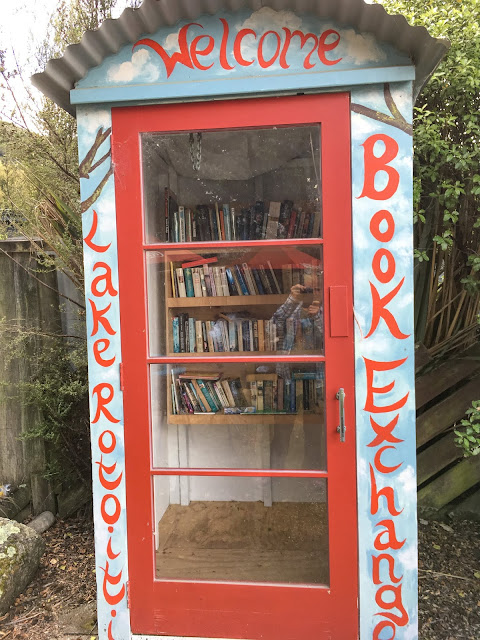