- April 11, 2019
My husband and I are spending several months traveling and tramping in New Zealand. We arrived on the South Island Dec. 28, 2018, and spent January hiking like crazy with our 21-year-old son, Dave’s brother, and his wife. February and March we spend largely based in Christchurch with our son, and now we are on the road for a final 3 weeks to visit the North Island. But I’m still catching up with January. This was the last of our four major multi-night tramps in that month.

This was a rugged tramp with some seriously steep ups and downs, and some poor weather in the forecast. My sister-in-law wisely decided to sit this one out, but the other four of us headed out boldly. The trip began with a five-minute jet-boat ride across and up the river, thus saving us either a potentially dangerous ford or an extra 2 or 3 miles of hiking (from the nearest bridge).

It was interesting to see how they handled the jet boats. The river is too erratic to allow for any permanent dock, so they trailer the boats across the road, and back a mobile dock into the river!
It was forecast to be a wet day, but the early morning had only a few sprinkles and things started off promisingly. The trail mostly followed the river, with an occasional detour through a meadow to cut off a curve. Later the detours were up and over steep bluffs.
By late morning the rain had begun, and the ponchos came out. We were following the Young River upstream; at this point the river split (actually, of course, two branches came together). We had to cross one, but happily there was a bridge.
Lunch—the only time we got to sit down on the whole hike, since it was so wet out. Note the rather small size of dry area under the shelter!
The next morning the weather was better, and kept improving. We enjoyed the first part of the hike, up to the upper valley where we turned to go over the pass. The stream was a beauty. 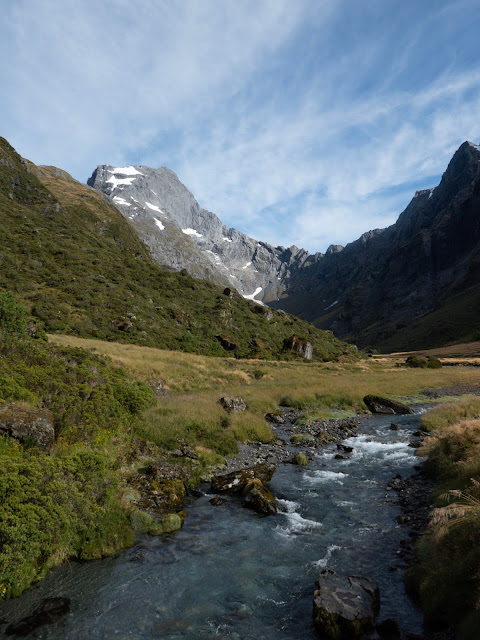 Things got more interesting when we started up.
The view from the summit was stunning—both for the beauty and wildness of what we could see, and because I realized how far down we had to go—and the trail on that side was nearly as steep, and a lot longer.
The views were in all directions, though, and many of them I didn’t have to climb (or descend). 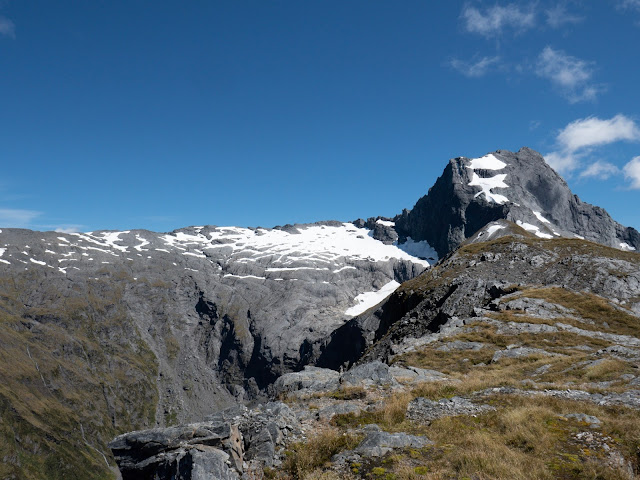 In spite of everything (including a gratuitous 500’ climbout of the upper valley adding to the total descent!) we made it to the Siberia Hut, which is very nice and fairly new, having burned in the last 10 years or so and been rebuilt.
Next day, not having damaged our knees enough, we did a day-hike to Crucible Lake, which involved a similar sort of no-nonsense trail. First we had to cross the Siberia River. Brrr!
Then we started up.
It took another wet stream crossing, but we finally reached the lake. It is tucked so deeply into a south-facing (dark side) cirque that it never fully melts out.
Lunch always helps. 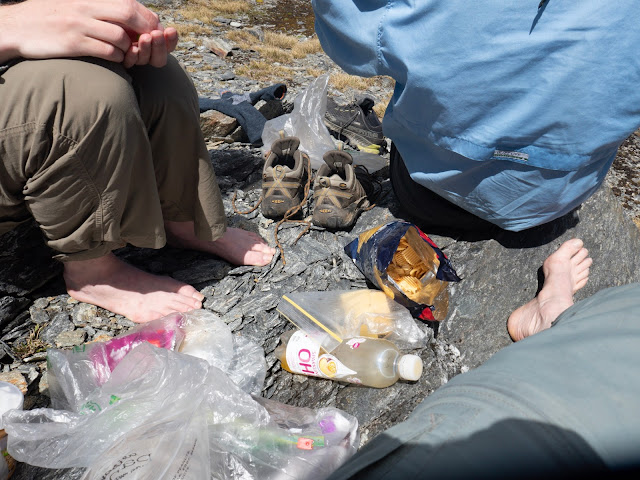 Fortunately, the final day was fairly easy. It began with some beautiful clouds. 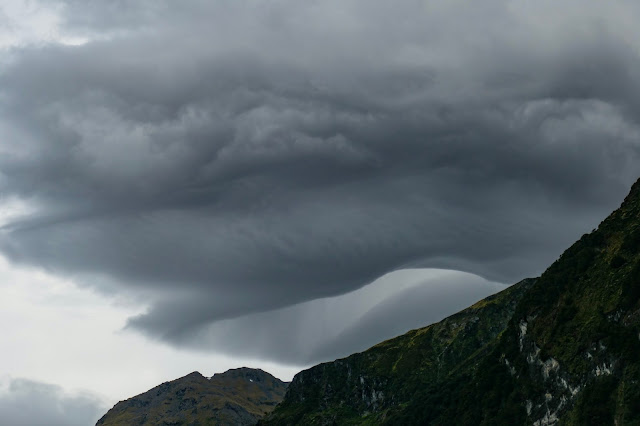 Then it was farewell to the valley. Though it started with an easy valley walk, the trail did climb about 600’ before dropping to the Wilkins River. In 1996, my husband and I explored well up that river, then hiked 2 days to get out. This time we picked up a jet boat after lunch, at the point where we started our second day of walking down the river last time. As that hike ended in a nearly disasterous river crossing, we were glad to have the ride.
This was our last major hike with the group, and we were delighted to be met by Carol, who had dinner for us in a warm, dry cabin out of the wind. We were glad not to be tenting as the wind was fierce all night!

Text and photo copyright Rebecca M. Douglass. Please do not use without permission. Link-backs are always appreciated!