- March 07, 2019
Background: My husband and I and our 21-year-old son are spending several months traveling and tramping in New Zealand. We arrived on the South Island Dec. 28, 2018, and spent January hiking like crazy with Dave’s brother and his wife, before sending them home and settling into a home base in Christchurch, allowing me a bit more time between adventures to get some blogging and writing done!

I thought I had already shared photos of Milford Sound, but it looks like I didn’t. Since it’s a bit too much to add to the Hollyford Track report you’ll see next Friday, it looks like it will get a post all of it’s own!

Milford Sound wasn’t really a destination for us, but we did end up passing through three times—once at each end of the Hollyford Track in January, and again last week at the end of the Milford Track. I’m mixing in photos from each occasion.

The drive to Milford Sound--a 2-hour dead-end road from Te Anau--has plenty of great scenery, but it reaches it's peak as you near the pass through the coastal mountains.

The mountains rather defied the impulse to build a road through--the Milford Track, a 34-mile hike from the end of Lake Te Anua (I'll get to that report eventually) came first by several decades, but wasn't the most practical way to get tourists in. In the 1930s, work began on the Homer Tunnel, which wasn't completed until the 1950s, thanks to a little upset in Europe that stopped work. The tunnel remains a single lane road--it used to allow traffic both ways with just room to squeeze by, but too many large buses and campervans made that impossible. You now wait up to 7 minutes at each end for your turn.
Fortunately, while you wait, there's plenty of fantastic scenery to enjoy. We were there on sunny days, but in 1996 my husband and I came through in the rain. We couldn't see as much of the mountains, but there was a waterfall every few yards along the cliffs all around.
Another standard form of entertainment is the kea, the world's only alpine parrot, and claimed to be the world's smartest bird. They certainly have the curiosity of an intelligent animal, and can do serious damage to a car or a backpack (or carry off a single boot--we learned to tie boots together when drying them outside overnight, as a linked pair is too heavy for a kea). Vaguely grey-green-brown on top, there is a startling patch of orange visible under the wings when they fly.
After seeing the kea at the pass, the sign at the coffee shop in Milford Sound didn't seem so unreasonable: 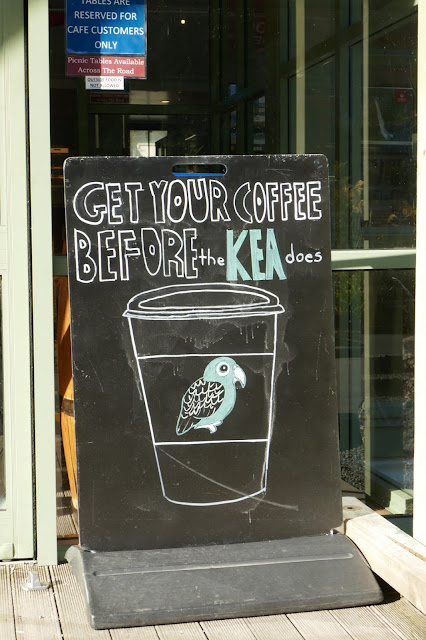 The west end of the tunnel is at the base of an even more impressive cliff. You can't see the top here, but you can probably tell why they didn't build the road over it!
Before we reached the sound we had to stop another time or two, including at The Chasm, which was fairly impossible to photograph, but gave me this portrait of the artist and several other tourists. 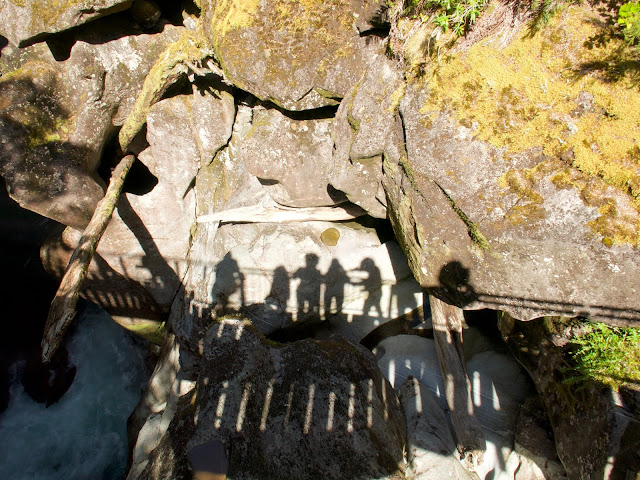 We reached Milford Sound in time to check into our dorm at the Milford Lodge (it's a place to sleep, sort of. The main recommendation is that it's there), and then see the Sound in the last light of the afternoon.


After our look around, we made dinner in the communal kitchen at the lodge/campground. We did try to eat well! 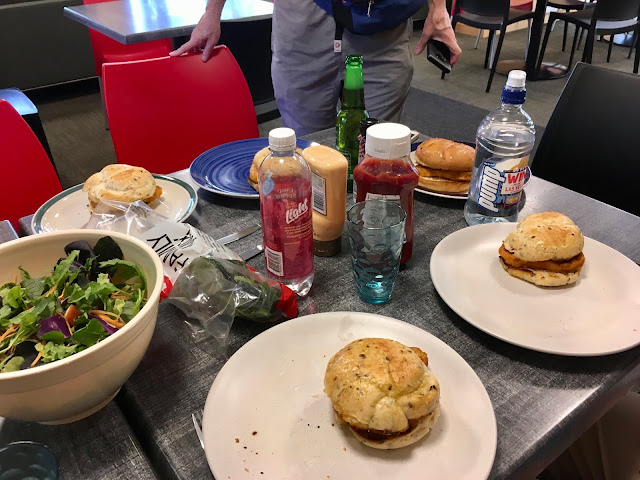 In the mornings, the light is better! 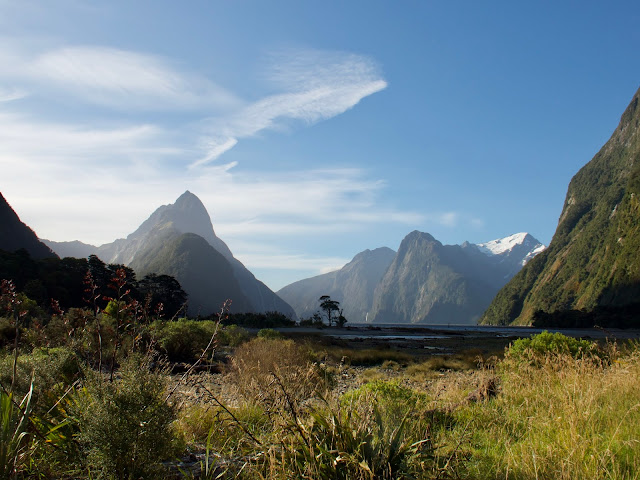 There are, of course, many ways to see the area, most of them also excellent ways to extract money from tourists. Boat tours are very popular, with most of the participants bused in from Te Anau or even Queenstown, about 6 hours away. You can also rent a kayak.

Our "boat tour" was a 5-minute ride from the end of the Milford Track to the tour boat terminal on a little bitty boat with, alas, plastic side-screens that ruined the views.
Another popular form of tour is the scenic flight. Ours was a transport flight, to get us to the start of the Hollyford Track, but it was still scenic.
Pretty much everyone who visits the South Island wants to visit Milford Sound, and unfortunately it shows. Lodging is impossible unless booked months in advance, and the scene is a bit of a zoo. But every now and then the boats all go out, the airplanes and choppers stop, and peace prevails. 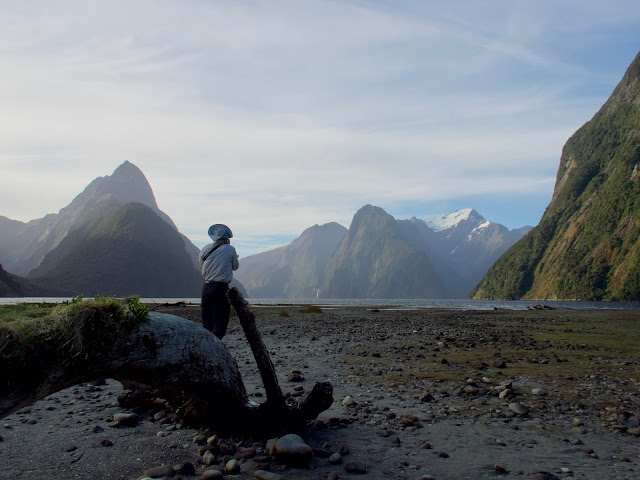