- March 14, 2019
Time for another photo essay! This time, we're heading out on the Hollyford Track, in the second week of January.
Background: My husband and I and our 21-year-old son are spending several months traveling and tramping in New Zealand. We arrived on the South Island Dec. 28, 2018, and spent January hiking like crazy with Dave’s brother and his wife, before sending them home and settling into a home base in Christchurch, allowing me a bit more time between adventures to get some blogging and writing done!
The Hollyford is an interesting track, because you have two choices: you can do an out-and-back, including a 10-mile stretch along Lake McKerrow which is reported to be awful, with no views to redeem it, or you can get a flight in to Martin's Beach from Milford Sound and hike one way (there's another cheat, which we used, as you will see). Naturally, we chose the flight, and as we had two cars, we managed to set up a shuttle, leaving one at the Hollyford Trailhead and driving the other to Milford Sound.
We had to make an early start to meet the pilot's schedule. We were on the tarmack on schedule, ready to board... that little thing? We thought it was tough getting five people, our packs and food into one car, but the plane looked even smaller! Fortunately, it was bigger than it looked, and we all fit, including the pilot.
The flight was fantastic, even if it was just "transport," not a "scenic flight." We flew the length of Milford Sound, then north along the coast several miles to Martin's Bay. 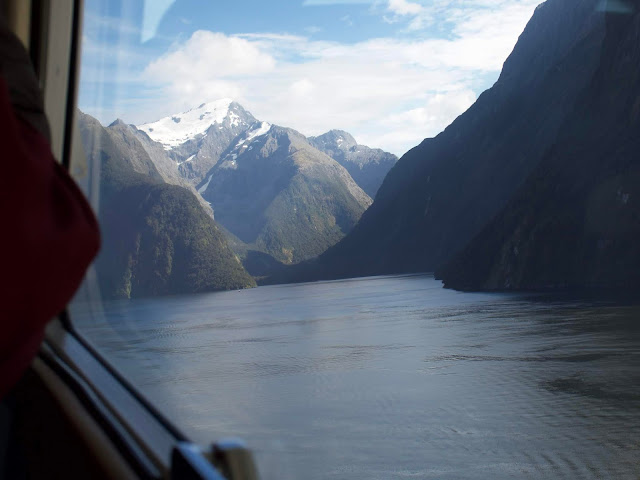 Once deposited--very smoothly--on the grass runway, we had to find the track (harder than you'd think) and walk about 3 miles to the Martin's Bay hut, in and out of beech forests.
The hut gave us access to the beach, where we spent the afternoon exploring quite happily.
One of the major attractions was the seal colony a half mile away. The rocks were crowded with seals, including many adorable babies.
The second day we had several miles to hike--but first cheat #2: a jet boat that took us up the 10-mile lake, plus a few miles up the river, saving us 2 full days of slogging. It was also both a scenic ride and a fun one, as the wind was brisk and by the upper end of the lake, we were slapping through a substantial chop while admiring the towering peaks.
For the next two days, we walked a wide and easy path up the Hollyford River, which at this point was a pretty flat stream. There was only one point where we had to climb a bluff to deal with a narrow part of the river valley. The forest is pure Fiordland--rain forest, beech trees, giant tree ferns, moss, and birds.*
We overnighted at the scenic Hidden Falls Hut, where there were only 3 other people (there had been a half a dozen besides us at Martin's Bay).
After a long day hiking, we enjoyed sitting indoors, looking out at the view while reading and writing (thanks to my husband, Dave, for the photo of me, our son, and our sister-in-law [hiding under a hood]). 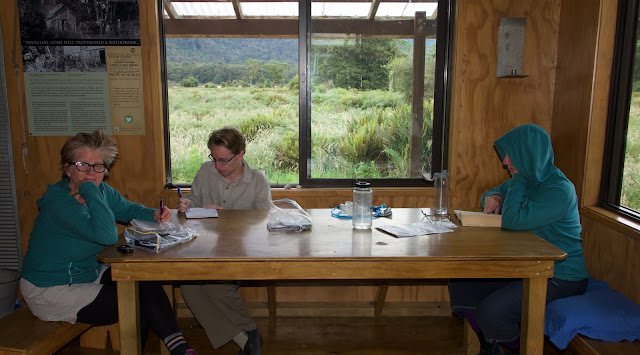 The hut sat in one of the few large clearings we saw on the hike, and we appreciated the views of the peaks that offered us. 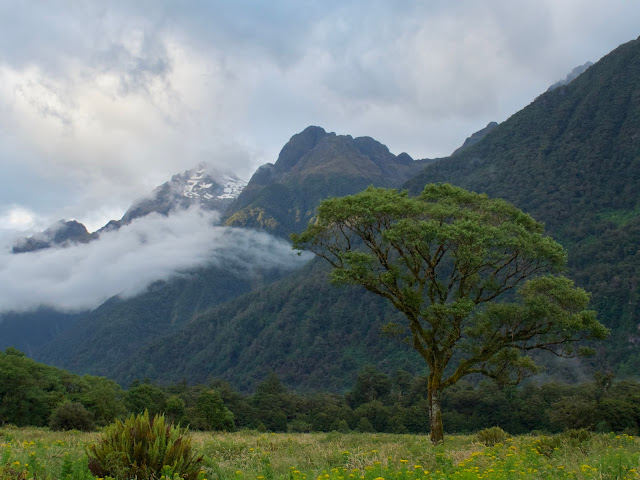 We didn't hike long the next morning before finding the hidden falls that gave the hut their name. The creek makes a 90-degree turn at the bottom of the falls, and it took a bit of prying to get a view!
There were no creeks to ford on this tramp, but not every bridge gave the fullest sense of confidence. It seemed stable, but the angled support, not to mention the rocks on top of it, made me think the thing had seen some fierce high water. 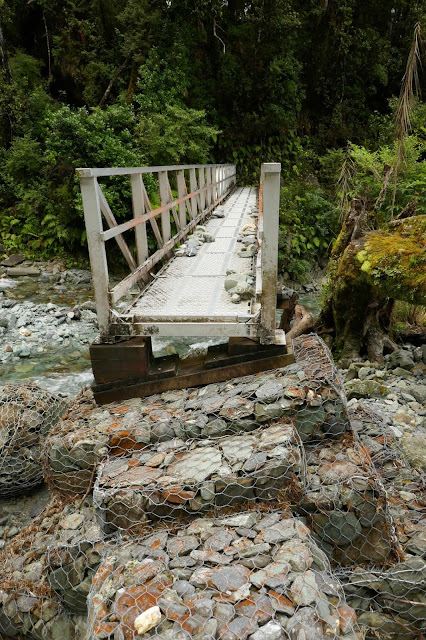 By mid-day on the last day, I was looking at the end of the trail. Nice to see the cars and cross one last bridge to get to a clean shirt and some potato chips!
*About the birds of New Zealand. New Zealand birds evolved with no land-based predators--no land-based mammals, in fact. As a result, many are flightless, and nest on the ground, or in holes in trees. Unfortunately, when humans came, first the Maori brought rats, then the Europeans brought more rats, then rabbits, possums and various deer-like critters in order to have things to hunt. When the rabbits got out of control (duh!), against all advice, stoats, ferrets and weasels were imported. As a result, in the last hundred years many endemic species have gone extinct, and many more are endangered. The forests that were deafening to Captain Cook are nearly silent. Even the difference between our 1996 visit and now is noticeable.
The good news is that a nation-wide campaign to eradicate the predators is underway, and in some areas, including the Hollyford Valley, the progress is audible. Extensive trapping has reduced the number of predators enough to allow fantails, riflemen, tuis, and bell birds to come back to the the forests, though other, rarer birds are confined to certain off-shore islands that have no predators.We are grateful to those--including Air New Zealand--who come up with the funds and put in the hard work to make this happen.
©Rebecca M. Douglass, 2018 As always, please ask permission to use any photos or text. Link-backs appreciated.
Hollyford Track New Zealand photos tramping in New Zealand