New Zealand: The Routeburn Track
It’s way past time I started getting some photo posts out to you all, since I’ve been busy taking pictures of some of the most scenic landscapes around for over month. (See the post on Mt. Cook)!
Our first major hike (tramp) back in early January was the Routeburn Track, where nothing quite went as anticipated.
The trip began promisingly, with reasonable weather and some good views as we climbed toward Lake Howden Hut, taking a detour up to Key Summit on the way.
Our first hint that something was wrong came not so much when our son didn’t want to do the side-trip, as when he reported on our return that he was shaking and couldn’t get warm—on a day that wasn’t particularly cool. We walked another 15 or 20 minutes to Lake Howden to eat lunch, where I confirmed that he was running a fever (I know—I should have checked that when he first mentioned it). We fed him ibuprofen and he took a nap in the sun, and eventually declared himself able to go on.
This was a tricky decision, because of the distances involved and because of lodging issues. Our huts/campsites on the Track were booked and paid for. If we backed out, we had no idea where we could find lodging; it has become very difficult to get a room in the popular areas of Fjiordland. Since our son felt better, we went on to where we at least knew we could spend the night.
The hike to McKenzie Lake, about 8 miles, took us until mid-afternoon, including a stop at the very scenic Earland Falls. At 175 meters the spectacular fall lands more or less on the trail, forcing detours in heavy run-off and putting cameras at risk from the spray.

Our first night at McKenzie we were camping, and as soon as we had tents up, our son crawled in and went to sleep. He didn’t budge much for the rest of the day or night, except to eat a little—and to be sick. That was when we went to the hut warden and explained that we didn’t think we’d be able to move on the next day, which should have been another 8 or 9 mile day up over Harris Saddle. The plan was to do that on the second day of our trip, then return to McKenzie for the third and final night.
Instead, we spent the next 2 nights in the hut, and my husband and I dayhiked a bit, toward the saddle and up the McKenzie valley. The fact that the weather closed in and it rained much of those 2 days reconciled us to the loss of our scenic crossing of the divide. It was cool to walk back down the trail and see the change in the creeks and falls as the rain drained out of the high country.

The time in the hut allowed our son to recover enough for the hike out on the 4th day, and even to join us on a hike up toward the saddle again because the rain had stopped and there were signs of clearing. There we saw only glimpses of mountains, but encountered a flock of kea (alpine parrots) performing for us, a worthwhile trade-off.
We were able at last, just before leaving, to get a good view of the lake and the valley beyond. 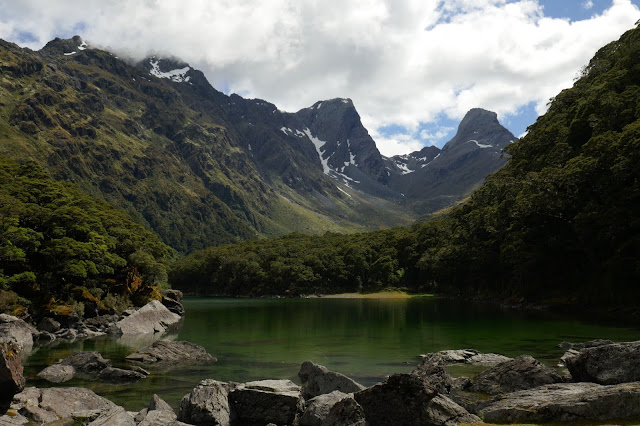 We also had a few cooperative birds. New Zealand has no land mammals, and is famous for the bird life. That has taken a hit since humans came to the islands 1000 years ago and began bringing in predators and competitors, but the collapse of the avian population has been especially noticeable in recent decades--even since my first visit in 1996. It was good to see an aggressive predator trapping program in many areas, including along the Routeburn Track, and to observe that it was beginning to have an effect.

Feeling a bit frustrated by this failure to get to the most scenic part of the route, my husband and I made a return several days later (after we’d hiked the Hollyford Track) and dayhiked to Harris Saddle from the other side, a hike of about 17 miles and some 2700’ up and back down.
On that day, the weather was perfect, and the hike more than worth the long day.
We began by following the Route Burn up to Routeburn Flats, a good climb but made easy by a very smooth and well-graded trail.
After the Flats another hour of serious climbing took us to the Routeburn Falls hut, where we would have stayed. The view from the porch was impressive, to say the least!
But there was more. After admiring the falls, we continued up to Harris Saddle, painfully aware that while we had plenty of daylight for the hike, we were going to return to our camp in Queenstown very late indeed.
The views of and from the final climb were well worth the fatigue.
Thanks to the very long midsummer days, we enjoyed the drive back to town along Lake Wakatipu in the dusk. 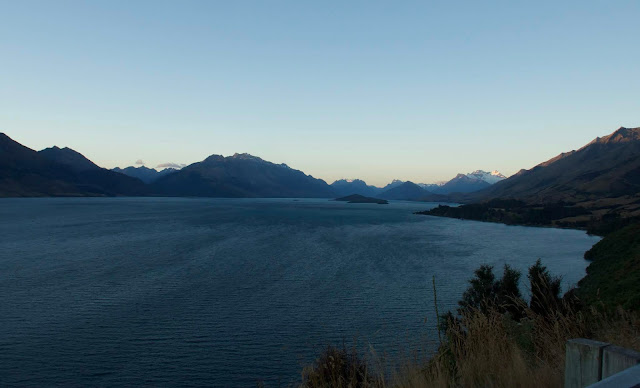 Hope you've enjoyed this quick report! Now that I've figured out how to get full access to my blog (visit the library), I'll be getting more reports up soon!
photos Routeburn Track tramping in New Zealand