In late October we traveled "down east" (or "downeast" as we saw it on some signs) to the coast of Maine, and on up to New Brunswick, Canada. Our main objective was Hopewell Rocks Park, near the top of the Bay of Fundy, and home of some of the highest tides in the world, with a tidal variation of up to 52 feet.

On our way north, we spent the night at Machias, Maine, with visits to Cobscook Bay State Park and the Cutler Coast preserve.
Morning at the Riverside Inn in Machias. The Machias river is tidal at this point, so we looked across the mudflats to the stream in the middle.
At Cobscook Bay State Park we found a wonderful campground (closed for the season; this was to become a theme on our trip). Also glacially smoothed volcanic rock and fairly extreme tides, though this was way up an inlet near the mouth of the Bay of Fundy. 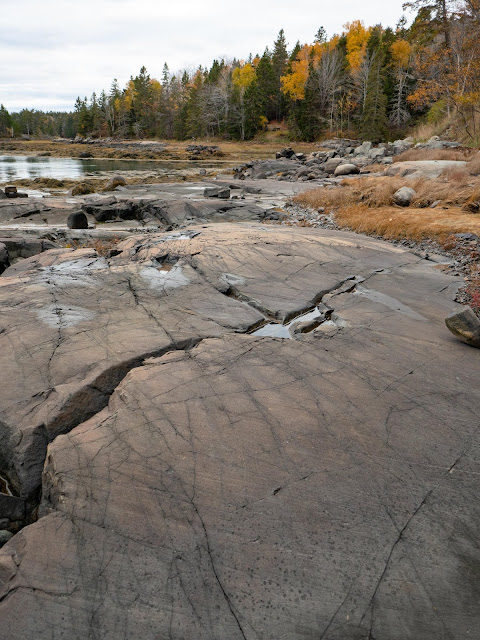 From Machias on the way to New Brunswick we stopped on a whim to check out the Cutler Coastal Preserve. We ended up doing a nearly 7-mile hike out to the coast, where the tall tides lapped more volcanic rocks (very different from Acadia, where the rocks were mostly granitic).
Low tide at Hopewell Rocks was before 8 a.m., so we spent the night in Moncton (because the campgrounds and motels nearer the park were closed for the season) and drove to the park at sunrise. The park was officially closed, with no services, but we were able to walk the beach.
We returned in the late afternoon, about an hour past high tide.
We were definitely of the opinion that low tide was best. On the beach, we were constantly aware that we were way below the tide line, which you can see as the point where the rocks (the "flowerpots") are sharply undercut.

I'm pretty sure that most of these things were relatives of my troll friend, Gorg (see flash fiction about same, above).
As we continued along the coast and around the corner to an inlet, we were struck by the vast expanse of mud--and the canyon carved through it by the stream draining out.
A more dramatic high tide/low tide pair, from the viewing platform above (for obvious reasons, I didn't shoot any high-tide photos from the beach).
Same formation about 7 hours later.
From Hopewell Rocks we drove down the coast to Fundy National Park of Canada, for yet another perspective on the region. We used the last of the afternoon to hike to Dickson Falls, then to explore an area of the coast where there was once a booming mill operation.
We also read the weather report, and instead of getting a campsite in the unexpectedly open campground, we opted for the more expensive, but warmer and drier yurt. High winds and heavy rain arrived as forecast, and we considered it money very well spent.
In the morning, not wanting to schlepp over to the cookhouse in the rain, we ate cold cereal in our yurt, then drove into the nearby town of Alma for a cup of coffee. Once again, we found that most places were closed for the season, but we did get a great cup of coffee and a muffin at the Octopus's Garden, which was not closed for the season. Oh, no. Not at all. It wasn't going to close until the next day.

One aspect of the extreme tides that I hadn't thought about was the effect on the boats in the fishing fleet. In Alma, we spotted how they deal with being left high and dry twice a day.
A closer look at the underside of the boats:
Our final act before leaving for home was one more hike, up in the high part of the park (about 1200' above sea level, as I recall). It was clear up there why the season was winding to a close.
This was the last of our overnight outings in Maine, and the next photo post from the Ninja Librarian will be of New Zealand!

Hope you enjoyed this one, despite the unmerciful length :)
###
©Rebecca M. Douglass, 2018
As always, please ask permission to use any photos or text. Link-backs appreciated!