- December 21, 2018
Still coming along weeks if not months behind on my photo posts from our fall excursions, so while Maine is getting covered in snow and we are all thinking of snowflakes and Christmas trees, I have some pictures of the fantastic fall colors to share! (And yes, I realize that my Friday post is posting on Sunday evening).

Way back at the start of October we took a trip into the Maine woods (see the post on the Gulf Hagas trail), including Baxter State Park. Baxter is one of the larger state parks around, and has an interesting history. Most of the park was the gift of Percival Baxter, when was governor of Maine in the 1920s. He bought up 6000 acres of land including Mt. Katahdin (now the northern terminus of the Appalachian Trail), and in 1931 donated it to the state as a land trust.

Baxter had some very specific rules and regs for the land he donated. Most importantly, it was to remain wild, with wilderness the first priority, and recreation second. As a result, the park has a very limited road system, and none of the roads are paved. The visitor is meant to discover and explore the park on foot. The campgrounds also reflect this rule: they have lean-tos and even cabins and bunkhouses, but no water faucets, let alone showers (campers can haul water in or treat that in the streams).

We had no problem with any of that. Nor did we mind the trails being rather steep and rough, though that can make things hurt :)

We spent three nights in the park. The first, we camped near the south entrance, at Roaring Brook campground, and did couple of short hikes, one in the evening (hoping for moose; we revisited the lake in the early morning with the same hope, but no luck either way).

With or without moose, the lakes and ponds were beautiful. 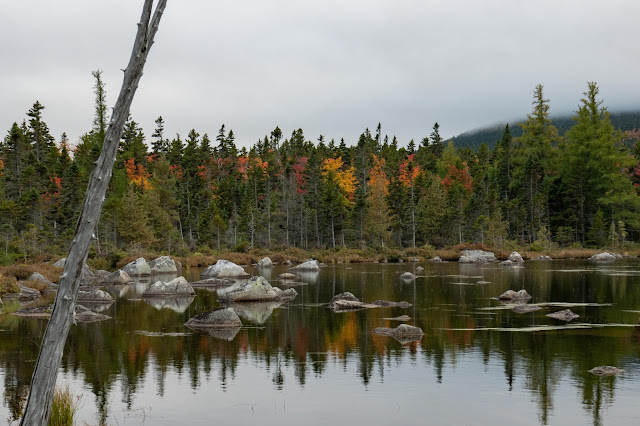 The next morning, with rain on the way, we hiked a couple of miles up a trail toward Katahdin itself, enjoying the fall colors and eventually views of the great massif.

From Roaring Brook to the South Branch Campground is only 13 miles by trail, but a bit more of an expedition by road. We made it longer by taking a rainy-day drive through northern Maine, and arrived to take possession of the bunkhouse about bedtime. Though it could hold 8, we were the only occupants on that rainy Thursday night.
Next morning the storm had moved on, and we launched early for a strenuous hike recommended by a friend of our Maine friends, the Traveler Mountain loop. This 10.5 mile hike isn't for the faint of heart, as you hit three summits and gain (and lose) about 3600' of elevation.
The hike started innocently enough with a flat walk through the woods along South Branch ponds. We came back to this point the next day and followed Howe Brook to the falls, but first we needed to find that Center Ridge trail.
About an hour along and a fair way up we began to get open spaces and see the views.
After an absurdly long climb, we reached our first summit. Which was just a flat spot on the ridge on the way up to the first real summit (1.2 miles by that sign). Being bold and strong, I sat down and ate a snack.
From the main summit, we began to realize that it wasn't just climbing--we had a significant drop from one summit to the next.
From the bald knobs to the thick forest. Having a trail here was a good thing.
After North Traveler, it was pretty much straight down to the end. 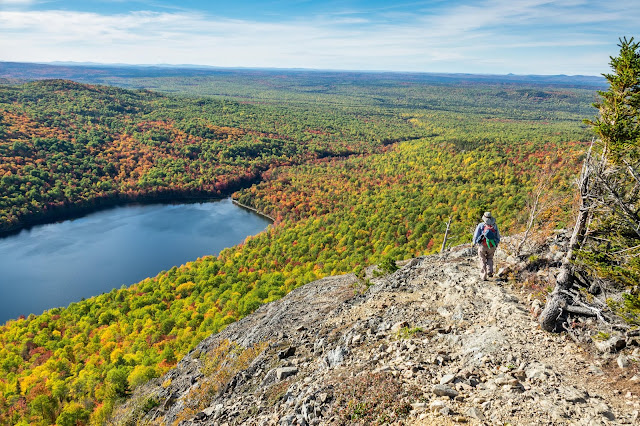 We were tired enough after that hike that we nabbed one of the last campsites for the night. That allowed us to do a hike next day, a calm frosty morning.
After nearly 11 miles the previous day, I was surprised to find I was able to do the 6 miles RT to the falls on Howe Creek. They proved to be worth the effort. 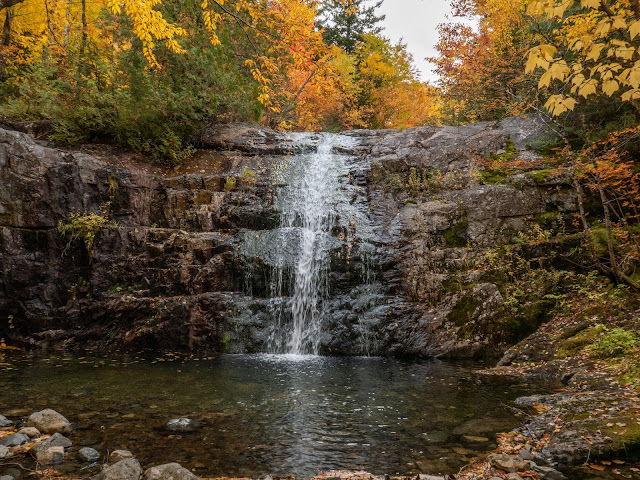 After that, we felt like we had really gotten the feel of the fall color thing, and with a holiday weekend bringing crowds into the park, we headed for home. 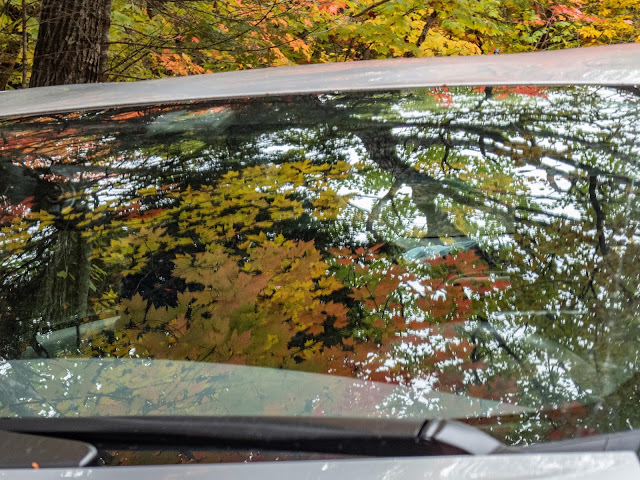