Non-fiction Review: The Egg and I, by Betty MacDonald 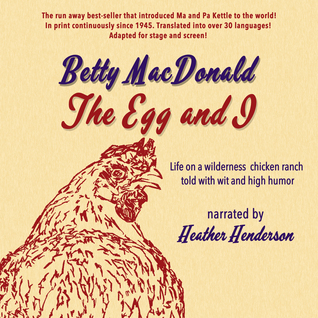 Title: The Egg and I
Author: Betty MacDonald. Read by Heather Henderson
Publication Info: Audio book 2015 by Post Hypnotic Press, Inc. Originally published 1945
Source: Library digital resources
Publisher’s Blurb:
When Betty MacDonald married a marine and moved to a small chicken farm on the Olympic Peninsula in Washington State, she was largely unprepared for the rigors of life in the wild. With no running water, no electricity, a house in need of constant repair, and days that ran from four in the morning to nine at night, the MacDonalds had barely a moment to put their feet up and relax. And then came the children. Yet through every trial and pitfall—through chaos and catastrophe—this indomitable family somehow, mercifully, never lost its sense of humor.

An immortal, hilarious and heartwarming classic about working a chicken farm in the Northwest, a part of which first appeared in a condensed serialization in the Atlantic monthly.
My Review:
Following their time on the chicken farm, Betty MacDonald and her family moved to Vashon Island, in Washington state. I therefore knew about her most of my life, being a Vashon kid myself (my mother in fact went to school with Betty's kids). I never much cared for her Mrs. Pigglewiggle books, but I admit to a deep and lasting fondness for Nancy and Plum, despite the fact that it's really a rather dreadful book from a literary perspective. For one reason and another, though, I'd never read The Egg and I. When I came across it while looking for something light to listen to, I decided it was time.
MacDonald's book reads as a deliberately, and at times desperately, light-hearted account of a difficult time. On the one hand, I was interested in her upbringing and the ways in which it didn't prepare her for the frontier life (she seems often rather incapable in ways that astonish me). On the other, I was at times aggravated by her exaggerated tone, as I felt that her humor sometimes degenerated into something remarkably close to whining. After all, she wasn't the only woman working on a hard-scrabble farm in the 1920s, and not everything that terrified her in the "wilderness" was all that big a deal. It felt to me like she was trying too hard both to be funny and to prove that the farm was an exceptional undertaking.
I won't go into her rather racist comments on the local Native Americans near the farm. For that, I can only say that she was a product of her time, and probably couldn't help it. Her commentary on the other local farmers was both more entertaining and less justifiable. That is, her humor sometimes slipped over the edge to become not a gentle laugh along with people, but a jabbing laugh at them (granted, some of her neighbors might have deserved it, or maybe they were just low-hanging fruit). I wonder if any of those people would have recognized themselves in her descriptions.
All in all, it was an entertaining read (listen), but, knowing some of the ways she played fast and loose with reality in her book about life on Vashon (Onions in the Stew), I won't take this as a terribly accurate historical rendering of life in Chimacum in the 20s.
The narrator is good, and there is an introduction written by the author's daughters that might be as interesting as the book itself.
My Recommendation:
Entertaining, and well-read, but it only gets a so-so recommendation from me. I did appreciate her evocation of the PNW winters, which are dark and wet and wet and dark, and are most of why I don't live there any more.
Full Disclosure: I borrowed an electronic copy of The Egg and I from my library, and received nothing from the author or the publisher in exchange for my honest review. The opinions expressed are my own and those of no one else. I am disclosing this in accordance with the Federal Trade Commission's 16 CFR, Part 255: "Guides Concerning the Use of Endorsements and Testimonials in Advertising."
1920s book review memoir