- November 22, 2018
Last week I had a couple of days to kill in the Boston area, and since I was in the neighborhood, I decided to check out Concord and the Minuteman National Historical Park. This had the advantage of also offering me a chance to check out the home--and grave--of Louisa May Alcott (1832-1888), the author of Little Women and about 30 other books. Alcott's home isn't part of the park, but since it's right next door, it might as well be. I'll start with Louisa, for the literary side of this blog :)
The Alcott family, as many of my readers may know, did a lot of moving around when Louisa was young. They kept returning to the Concord area, however, and in 1858 moved into Orchard House (the tour guide there implied that Emerson may have bought the house for them; I suspect that may be true, as Bronson Alcott had never before managed to keep up payments on a home). This was their home until 1877, and it was here that Louisa wrote Little Women and most of her other books.

Alcott used Orchard House as the setting for the March family, though when the girls were the ages of her characters, they lived next door in the home Hawthorne later named "Wayside."
I enjoyed the tour of Orchard House very much, but as photos are not allowed inside I can't share the experience! The house is, however, furnished with authentic period furnishings, and the web site says that about 75% of them actually did belong to the family. Many of May Alcott's paintings and drawings hang on the walls, or were in fact painted or drawn right on the walls and window frames (the painted wood obviously made a better canvas than the plastered and papered walls, though I wonder how "Marmee" felt about that, especially in the early days).

I also took a look in the Sleepy Hollow Cemetery (yes, it really is!) and located the graves of Alcott, Emerson, and Thoreau.
I was intrigued by the way in which Louisa's and Henry's graves have been turned into shrines, or maybe wishing wells for writers.

Being in need of a good walk, I also visited the two units of the Minuteman National Historical Park, starting with the Old North Bridge, the site of the first shot fired by the colonials at the British troops (who, I will note, fired first). At the centennial of that battle, a statue of the idealized Minuteman was installed across the creek from a monument installed in 1836. It was for the 1837 dedication of that obelisk that Ralph Waldo Emerson wrote his "Concord Hymn," the opening lines of which many of us learned off by heart in school, and were inscribed on the base of the 1875 statue:
By the rude bridge that arched the flood,
Their flag to April’s breeze unfurled,
Here once the embattled farmers stood
And fired the shot heard round the world.
In 1910, a plaque was also installed honoring the British soldiers who died there, with a pointed lines from a poem by James Russell Lowell, written in 1849.
The bridge is a modern restoration, but built to match the pictures of the original. That "rude bridge," being made for immediate use, didn't last the ages.
The other section of the park, on the other side of town, is a narrow strip surrounding 5 miles of the "Battle Road," the 16 mile road by which the British retreated to Boston, harassed and attacked by the colonists the whole way. Had the rifles of the time not been so unwieldy to load and shoot, and so inaccurate, they would have probably all died.
The Park Service has created a path that alternately follows the "Battle Road" (now mostly Rte 2A from Concord to Lexington) and the route through the fields and forests that the colonial militia took in their guerilla-style attacks. Periodic placards tell of the history of that day, which also represents an impressive day's hike: the British troops left Boston on the night of the 18th of April, marched through the night to arrive in Lexington at 5 a.m. and kill 8 militia men. The "shot heard round the world" was fired about 9:30 a.m., and the retreat began about 12:30 p.m. The surviving British (saved and reinforced by troops in Lexington) arrived back at Boston Harbor about dark, having hiked 16 miles in about 5 hours, while fighting a running battle.
Today, the path is disconcertingly peaceful, winding between fields and over wooded hills, past several historical homes and the Hartwell Tavern. It takes a great deal of imagination to hear the shots, shouts, and the cries of the mortally wounded. But many of the rock walls that line the path are the very walls behind which colonial soldiers took shelter to fire on the British, and several more gravestones remind us that men died there, 243 years ago.
The Hartwell Tavern "witnessed" the fight, though there is no record (oddly, to my thinking) of soldiers from either side using it for shelter or refuge. It was lived in continuously from its construction in 1732 until the Park Service bought it in 1967. They restored it in large degree to the 1775 look (though retaining some early 19th-Century additions to the house), and in the summer season it's set up as a museum.
Since it was the off-season, I could only peek through the windows.
In the end, I could only enjoy my beautiful day, and meditate on the march for their lives made by the British soldiers 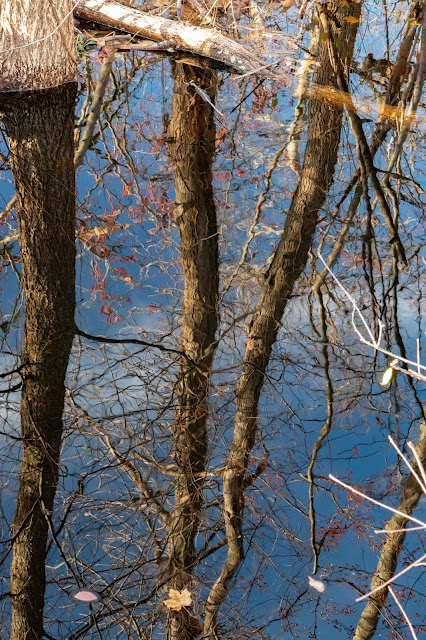 Thanks for coming on an historical walk with me! And apologies to my British friends for all the musket balls. Rebellious teens can be a real pain :)