- November 08, 2018
As we move into November, it's hard to cast my mind back to mid-September, when it was still quite warm, and the trees were mostly still green. It's nice to think about being warm, anyway, as I'm trying now to hone my cycling wardrobe to allow for at least short rides in temperatures down into the 30s!

We spent the night of Sept. 14 at the Basin Pond campground in the White Mountains of New Hampshire, in order to make a very early start on the Bald Mountain Loop, since all the accounts we'd read suggested it was a long and strenuous--and the weather forecast said there'd be rain before the end of the afternoon.

We drove past the trailhead on our way to camp Sunday afternoon, and the cars were parked for quite a ways either side of the lot. But at 7 on Monday morning, we had the place to ourselves.

The sun was up--somewhere. We started our hike under a low layer of clouds.
Just over an hour of hiking took us up past the South Baldface hut, and at last to some open views. That also marked the beginning of "the slabs," which reports warned were a fun scramble.
Turning around revealed the cloud shield below us.
I wouldn't much want to do this in the rain, let alone the snow, but on a sunny dry day, the slabs were a lot of fun.
As we neared the top, a long line of truly massive cairns over the bald shoulder of the mountain suggested the possibility of white-out conditions where you might need a giant guidepost every 50 feet.
Nearly three hours in, we hit the first, and highest, summit, South Baldface. We had a modest drop and climb to North Baldface, then a descending traverse to the point, behind and to the left of my husband, where we would descend the Bicknell Ridge trail back toward our starting point.
We took time for lunch--and to dry our sweat-soaked shirts--atop North Baldface. Even as we enjoyed the sun and food, we kept an eye on the gathering clouds, which never stopped swirling around the summit of Mt. Washington, a ridge to our west. 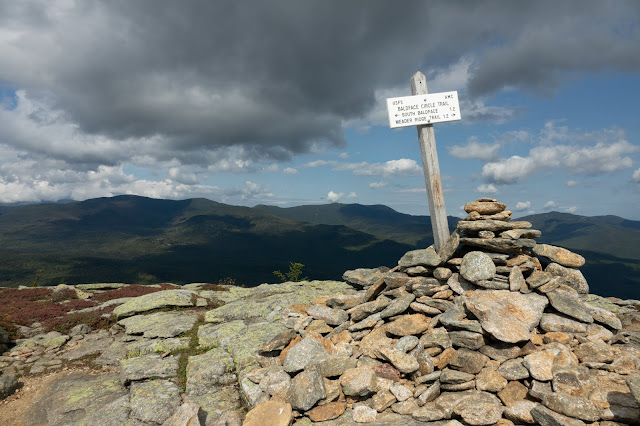 I don't have a lot to say about the descent. As advertised, it was steep and rough, and exactly the sort of conditions to make my knees very unhappy. But we enjoyed what we saw along the way.
Leaves had begun turning here and there, and were still a novelty. 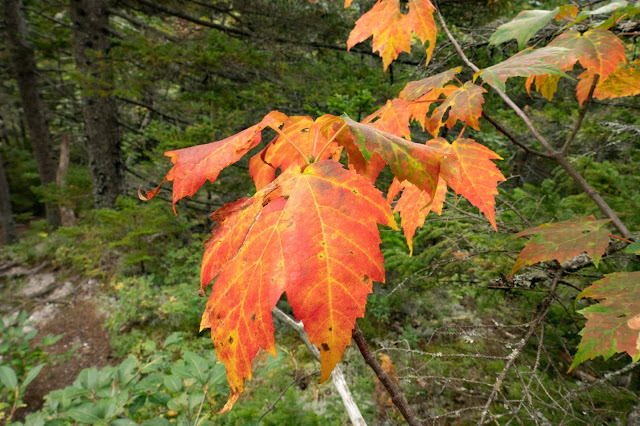 Halfway down we stopped to enjoy the Eagle Creek Cascades, in a green world. 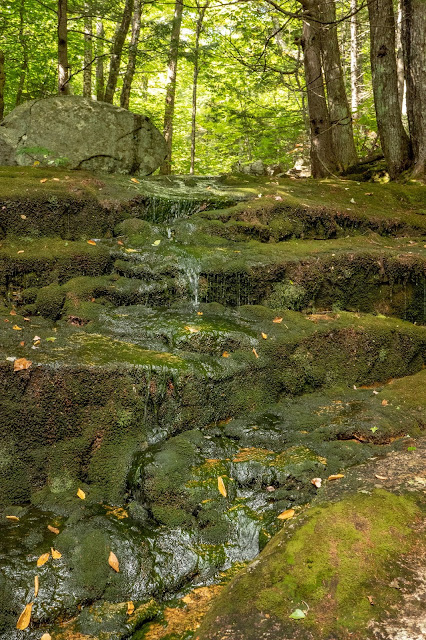 By the time we reached the Emerald Pool, less than a mile from the trailhead, we'd been on the go for over 7 hours. It took some strength of will to detour a quarter mile or so each way, but it was worth it, for a pool that really was as emerald green as I could imagine.

In case anyone's reading this with a thought to doing the hike (in another season--I wouldn't recommend it at this time of year, though some do manage winter ascents), our stats were about 7.5 hours for the loop, which is about 9 3/4 miles. We are reasonably strong, but not so young any more, and as you can see, easily distracted by photography, so we are on the slower end of times reported by other hikers. On our day, we saw only one, possibly two other parties doing the full loop, and they might have caught us had we not taken the less-used option on the descent (Bicknell Ridge, rather than Eagle Crag and the north side of the loop). We saw two other parties near the end doing short hikes; obviously a weekday after Labor Day turns this often-crowded hike into a chance for some solitude!