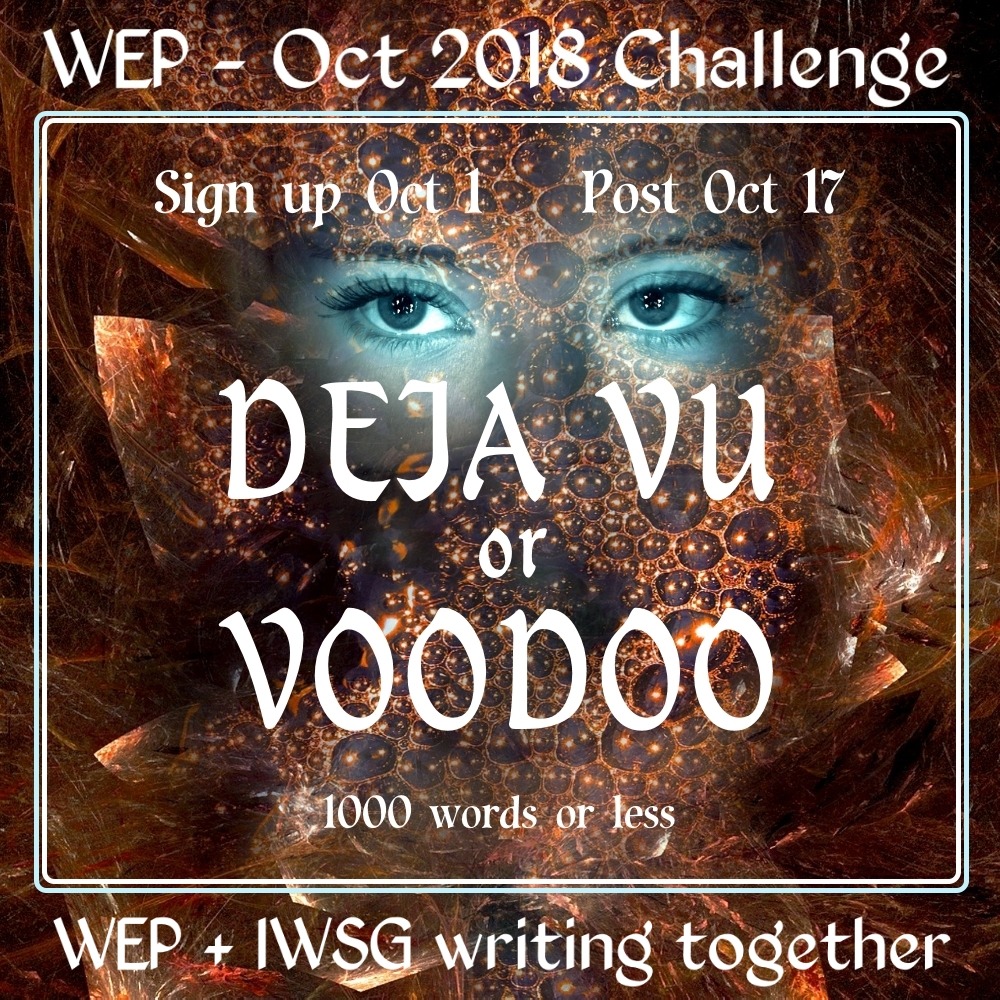 Write…Edit…Publish (WEP) is an online writing community now partnering with the Insecure Writers Support Group (IWSG). We post the third Wednesday of every second month. WEP challenges are open to all.

I don't really like horror, so I took the prompt in a different direction, and wrote a short story from my Pismawallops PTA mystery series. You'll only get the "deja vu" part if you read Death By Trombone :)  I managed to hit 1000 words exactly, exclusive of the title.

Deja Vu All Over Again

“We’ve been over this, Kitty. With my new job at the library I don’t have time for everything. I really can’t do the Fall Formal.” I crossed my fingers as I said it; I worked a great deal less at the library than Kitty did at their gas station.

“We have been through it all before.” Kitty didn’t sound like she agreed with me. She sounded like she was laughing at me, or humoring me, which was worse. “You can afford one evening, and the library isn’t open Friday nights. Well, plus some time to decorate. Come on, JJ. You know I depend on you.”

Dang. She was invoking our friendship and all our shared history. How could I say no?

I made one last attempt to weasel out. “You know I hate how loud the school dances are, Kitty.”

“Wear earplugs,” was her heartless response.

I finally cut to the real issue. “Don’t you remember what happened the last time I chaperoned a dance?” That actually silenced her. We were unlikely to forget the body I’d found while taking a phone call behind the high school gym.

“You win.” Kitty sounded so contrite I almost felt bad.

I had to be supportive in my turn. “I’ll find you someone to help, or I’ll come myself. I won’t leave you in the lurch.” I knew as I said it that I’d probably end up doing it myself, but Kitty had been right there for me when I found that body. Finding volunteers was almost more painful than finding bodies, and nearly as rare. Staying in the gym through an entire high school dance might drive me crazy, so I was motivated.

*
Motivated or not, even I couldn’t accomplish the impossible. The day before the dance found me in the gym, swathed in bunting and strings of fake colorful leaves. Our local evergreens didn’t provide the desired ambiance, so we hit up the party store on the mainland for an affordable substitute.

I took another swig of my coffee—cold—and considered the logistics of affixing plastic leaves to cinder-block walls. There was only one logical solution, and the ringing of my phone gave me the excuse.

“Brian!” I summoned my son and his best friend. “You and Justin get started hanging this stuff. I need to answer this call.”

I headed for the front door, phone in hand. Not even to escape the decoration would I go out the back door. It was out that door, while decorating for the Senior Prom the previous spring, that I’d found the last body. I took my call and waited while a bevy of teenaged girls hauled in a giant basket of plastic jack-o-lanterns. In all the noise, I couldn’t make out who was on the other end of the call.

“Hang on! Let me get somewhere quieter!” The breezeway in front of the gym was still crowded with kids, so I headed around the side of the building, not thinking about where I was going.

“So have you taken up a career in steam-fitting?”

I knew that urbane and sarcastic voice, and snapped, “What do you want?” My Ex didn’t deserve a polite response. “I’m not letting you off the hook. I want the money you owe in my account by the end of the month.” Good God, I thought I was done battling with Allen.

“I really don’t think you—” he began, but I didn’t hear any more. I was too busy tripping over something in the near-darkness, and I didn’t like what it felt like. I gasped, but contrary to Allen’s later claims, I did not scream. I did hang up on him in the process of trying to find the flashlight app on my phone, but I assure you it was entirely unintentional. Well, mostly.

For some reason my hands were shaking. It was pretty cold out there; an October night on Pismawallops Island can be pretty chilly and damp. That must have been why I shook.

When I finally got the light on, I wished I hadn’t.

Someone was stretched out face-up on the ground, eyes open and unseeing.

*
Kitty told me later that I screamed, though I know she was exaggerating.

Ron told me I phoned him.

A dozen people told me a dozen different stories about what happened next, and I don’t remember any of it.

I must have called Ron, though, because the next thing I knew, the police chief was holding me in his arms and repeating my name.

“Huh?” It wasn’t a very articulate response, but it must have been better than he’d been getting, because he stopped saying my name.

“No, it isn’t,” I pointed out. “It’s another corpse. What killed this one?” I didn’t really want to know, but I was determined to appear calm, and settle all the people who were hovering around as though I needed help.

“Clear out, all of you,” Ron took care of the problem for me. “Don’t you have a gym to decorate or something?”

“You just want to get her alone,” someone quipped. It was probably either my kid or Kitty’s.

They went, and I assumed Ron would move into investigator mode, but he seemed to be a great deal more interested in investigating me than the corpse I’d tripped on.

“Stop that.” I pushed him away, though in general I liked the way he kissed. “Don’t you need to figure out who killed him?”

“I believe that would be Archie McPhee,” Ron said.

“Huh?” It took me a minute to recognize the name of the famous  purveyor of magic tricks, gag gifts, and tasteless practical jokes. Then the lightbulb went off, and I flipped on my flashlight again. Steeling myself, I brushed off Ron’s hand and took a closer look at the “corpse”. Someone had left the price tag on the left cheek. 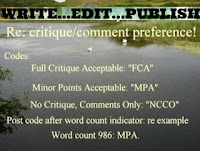 Like it? Want to join the fun, or read more stories?