Photo Friday: On the Shores of Lake Superior

- October 11, 2018
Last week this blog took you to the North Unit of Teddy Roosevelt NP.  This week I'm sharing some highlights from a couple of stops we made along the shores of Lake Superior in the first week of September: Porcupine Mountains State Wilderness Area, and Pictured Rocks National Lakeshore, both in Michigan. These were pretty much drive-by visits; we spent only one night in each area so we just touched on some of the possibilities.

At the Porcupine Mountains, we camped at the Presque Isle campground, and did our hiking and sightseeing along the Presque Isle river close by. Since it rained heavily during the night and we'd failed to adequately secure our gear, instead of hiking in the morning we had to go off and find a laundromat. The thunder and lightning in the night were worth it, though--it must have been quite a night out on the lake.

The trail along the west side of the river was well-engineered to handle the crowds who must come on summer weekends. It wasn't bad when we were there mid-week, though the campground was full--we got one of 2 open sites. 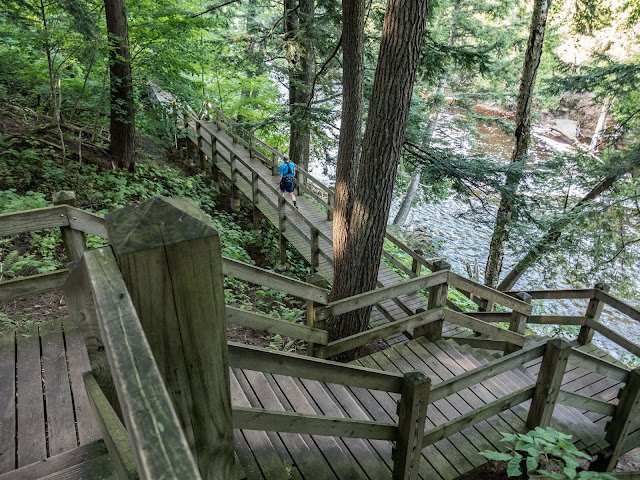 On the other side of the river, we poked a little way into the forest, finding the trail wet and full of slick roots. We decided pretty quickly that we had gotten the general idea and went back to the river. 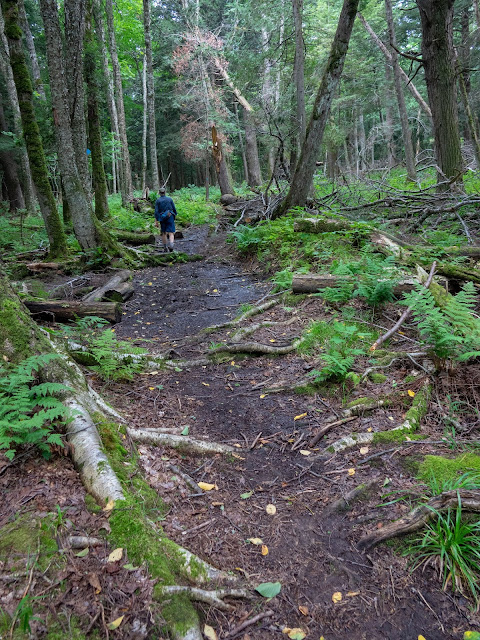 The river is largely about waterfalls, most of which we Westerners would call "rapids," or at most "cascades."
The water was full of tannin, giving it a brown coloring, different from when rivers are brown from silt. This was more like... a river running with tea.
Maybe the coolest thing we found there was the way the foam on the river disclosed the eddy patterns of the water.
This next is apparently a common phenomenon there, because we have seen other photos of it. The foam gets caught in an eddy, and rotates as it builds, until you have a large "wedding cake" of foam in constant rotation. While we watched, a puff of wind caught it and pushed it out into the current, where it was broken up and carried away.
The next morning, as noted, we were very very wet, and found a laundromat in a nearby(ish) town. To save time, we had breakfast while our clothes washed and dried.
Clothes clean and selves fed, we drove on to Pictured Rocks National Lakeshore, where we discovered that it was Friday of Labor Day weekend (yes, these things can slip your mind on a long trip), and there were no campsites available in the park. We decided to make a day of it, then drive on and take our chances (we did, in fact, find a spot in a commercial campground just outside the east end of the park).

The sun came out on the shore by the time we got there. We weren't the only ones to appreciate it.
I was struck by how blue-green the water was, at least next to the shore.
We concentrated our efforts on a 6+ mile hike to Chapel Rock and Chapel Beach, since we didn't have time to do multiple explorations. The trail led through a near-monoculture of beech trees, past a waterfall, and down to the beach.
Chapel Rock was once a full arch, but sometime in the 1930s (? a long time ago, anyway), a big chunk of it fell into the water, leaving the tree's roots reaching across open air to the mainland.
The "pictured rocks" are the multi-colored rocks that form the cliffs along the shoreline, and they erode into pebbles of many colors. 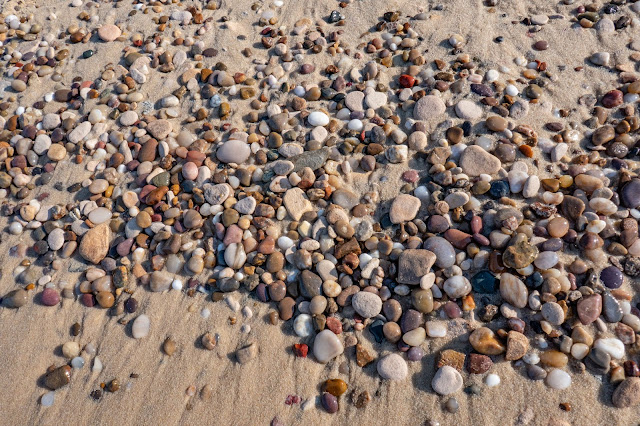 It was a warm, humid day, and the water was inviting. So even though the beach was well-used, we walked a little away from the crowds and stripped to our undies for a swim. Hope we didn't shock anyone too much.
All of that hiking left us with just enough time to get to a scenic viewpoint to cook some dinner and watch the sun set (I don't even know just where this was--somewhere along the Twelvemile Beach is my best guess). The sunset was well worth the price--driving the rest of the way to Grand Marais, and finding a campsite, in the dark. 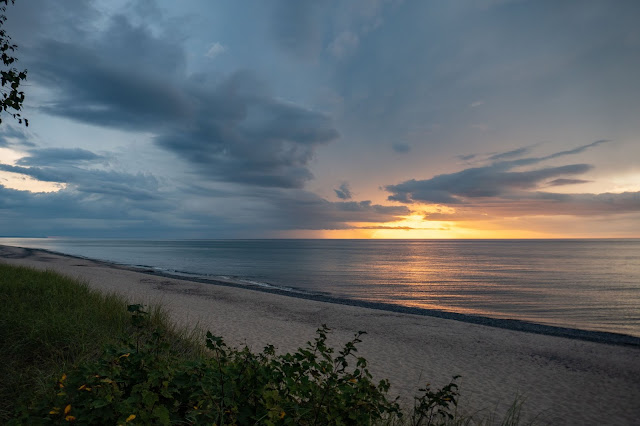 There was definitely a lot more we could have done in either of these two parks, and maybe someday we'll be back. If not, at least we got to see that much!