- October 18, 2018
Still working our way across the country! (And now I'm nearly a day late with my Friday post. Oops. So hard to keep track of the day of the week!)

After crossing several states I'd never before visited, we entered Canada at Sault Ste Marie, taking me into Ontario, which I'd also never visited (before we finished, we also visited Montreal, Quebec--another new Province, which is the only part of Canada that felt like a foreign country).

Our main target in Ontario was Algonquin Provincial Park. We didn't quite make it the first night, and ended up grabbing a campsite at another Provincial Park about an hour from Algonquin. We were fortunately well equipped to fix dinner in the dark.
Next day we were able to claim a spacious site at Algonquin, as the holiday weekend campers streamed out of the park, leaving lots of room for us!
We made good use of our time in the park, with 2 hikes the day we arrived, and 2 the next day. Not all were long, but all were interesting! Trails were well constructed and well maintained.
Fungus became something of a theme for us, as we found many interesting specimens. I just admire them; no collecting here, so I don't know what they are. 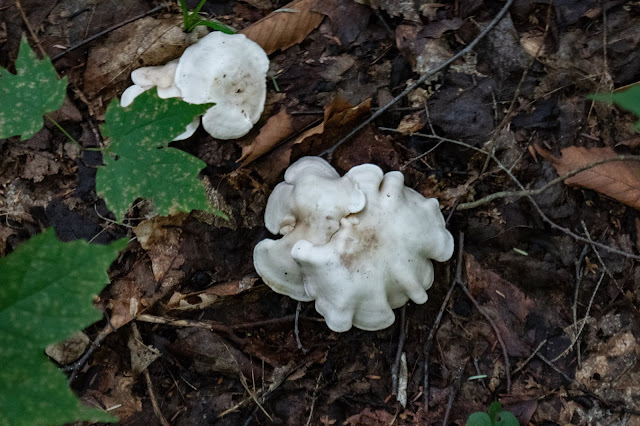 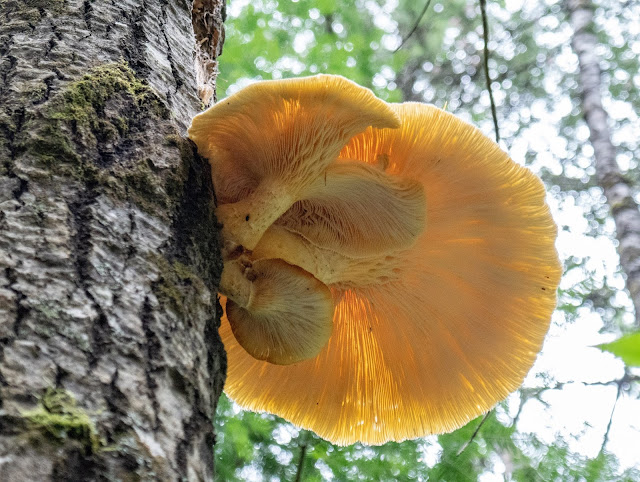 Our longest hike was the Centennial Ridge interpretive trail, which was different from most such trails. For one thing, it was about 6 miles long. For another, the stops on the trail weren't about the flora and fauna, but about the history of the park and the people who made it what it is. Each stop told about an important person in the history of the park, though only one of the locations had anything to do with the person.
The trail climbed to some "ledges" with great views, before looping around, past one of the ponds, and up to more ledges even higher (we'd thought they faced opposite directions, from the sketch map, but in fact the views were all to the southwest).
Another hike was the Spruce Bog trail. I'd heard about spruce bogs in books I've read, so I was happy to learn what they were. Basically, a spruce bog is a wet area--often one created by a beaver dam--that has gradually filled in and is being colonized by black spruce, which are the most water-tolerant of the trees in the area.
The boggy area provided us with a rare sighting of a plant that has, sadly, been pretty much wiped out within sight of the trails, because of people collecting them. I won't say where we found this pitcher plant.
Ponds and bogs mean water lilies. 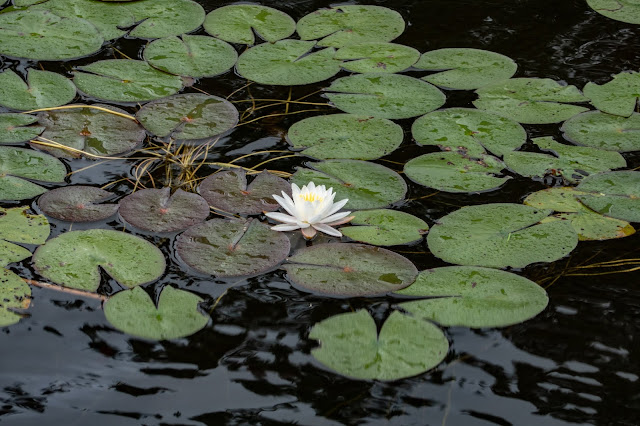 And other water plants. I'm not sure what these leaves were from, but they did appear anchored, not fallen from land plants. 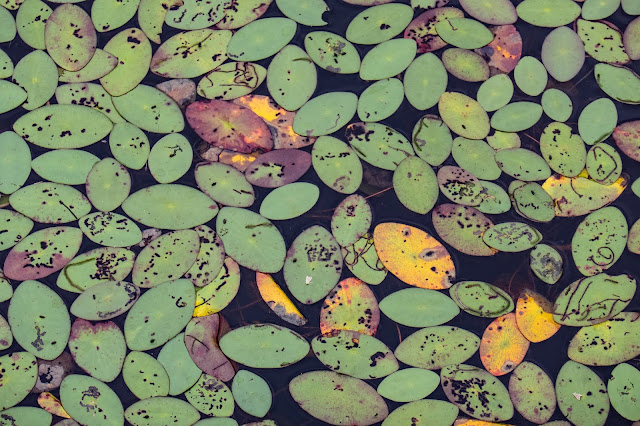 Forests, hills, and water: all made more beautiful by a setting sun. 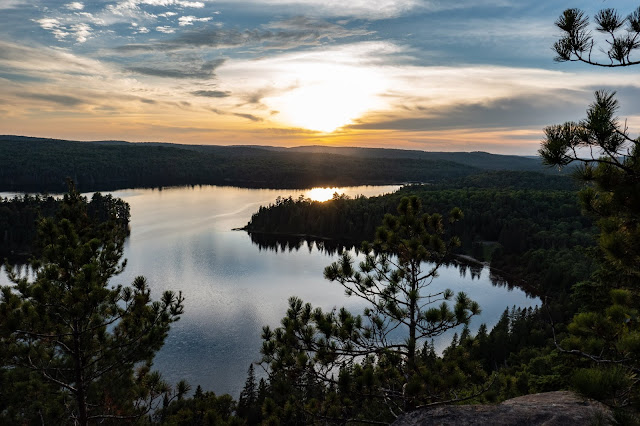 Finally, we saw a moose! Sadly, the signs were the only moose we saw.
I got the general impression that Algonquin is a park best seen and enjoyed by canoe or kayak. The one road through the park gave us access to a tine part of the backcountry, and trails are limited, partly because it's all pretty wet. We may never go back, but I'm glad we got a look at it!

For those interested in a visit, we arrived on Monday of Labor Day weekend, which is why the crowds were suddenly gone. It was clearly very busy over the weekend, and then on that day, they closed most of the campgrounds, so that we had only a couple of choices of campground (but since it was very nice and closest to our afternoon hike, it was good). By September, mosquitoes were few, temperatures were moderating (still pretty warm and humid for me), and as noted a few trees were starting to turn, so I'd say it was a good time to visit.