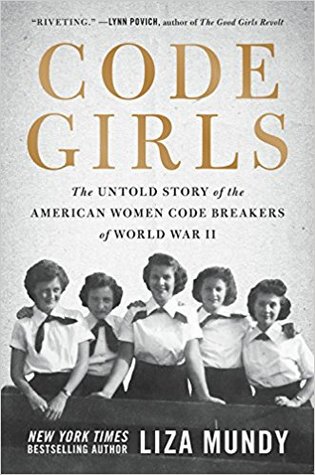 Recruited by the U.S. Army and Navy from small towns and elite colleges, more than ten thousand women served as codebreakers during World War II. While their brothers and boyfriends took up arms, these women moved to Washington and learned the meticulous work of code-breaking. Their efforts shortened the war, saved countless lives, and gave them access to careers previously denied to them. A strict vow of secrecy nearly erased their efforts from history; now, through dazzling research and interviews with surviving code girls, bestselling author Liza Mundy brings to life this riveting and vital story of American courage, service, and scientific accomplishment.
My Review:
Another fascinating bit of history, and another story of smart women doing work that has been underappreciated and ignored. In this case, there was some justification for the silence: it was top-secret work. Still, like other books I've read (and still more I'm about to read), it's a tale both uplifting and frustrating. Frustrating to see such talented women being treated like second-class citizens, and equally so to see how they, on the whole, accepted it. Valued as "computers" for their attention to detail, they were still somehow seen (or treated) as less able than men at math and science. But it's also uplifting to see that even at a time when they were too often not allowed into graduate programs, or couldn't get jobs teaching math (beyond the high school level, anyway, and especially after the war), these women found a place where their math and reasoning skills were put to good use.
Not all of what the "code girls" did was highly mathematical, of course. But code breaking requires a level of mathematical reasoning beyond the average, as well as a sharp and creative mind that can leap to some intuitive connections. The author does a good job of conveying both the difficulty and the tedium of the work, the excitement and the frustration.
Mundy also presents some nice portraits of several of the young women who traveled to Washington, DC, with very little (or no) idea what they had signed up for. Many were civilians (especially early on), specially recruited from the best women's colleges of the East. Later, many more were WAVES (the women's unit of the Navy) who tested well for mathematical reasoning and were assigned to the code-breaking unit, as well as some WACs (women's army corps).
I did at times lose track of the timeline, as Mundy traced individual women's courses through the war. It took me a while to realize that we were circling back repeatedly to different stages in the war effort. Other than that, I had no complaints. The writing was engaging and easy to read, and the story interesting. It's not one of the great works of history I've read, but it's good, and a story worth telling.

Their wartime work left a mark on some of the women, and on their families. I was delighted to read that Bill Nye (the Science Guy) is the son of one of the Code Girls. In that case, maybe the love of math and science was passed along. In other cases, codebreakers suffered from PTSD (utterly undiagnosed or treated, of course), due to either the stress of the work they did, or their failures to save lives--or the later realization of the lives they'd cost, too, since their work led directly to the sinking of many enemy ships.
As so often, the women were first brought into this work because much of it was tedious, and women were considered better at tedium (got to wonder if any of the men ever examined the realities behind that assumption!). Later, as men became scarce, the women proved to themselves and their superior officers, and eventually the world, that they were fully equal to men in their abilities. It's a shame the story couldn't be told for so long, because it would have forced universities and other agencies to give up the stupid idea that women can't do math, and might have saved a whole generation of women from undermining their own skills.
My Recommendation:
This is an interesting and worthwhile story. I think it never hurts to remind ourselves that women have been doing things that "women can't do" for a very long time. Every book of this sort helps us examine our assumptions and perhaps break down some stereotypes, so read it!

This is just a random thought, but I was reminded of some books I've read about the "Navajo code talkers" of WWII, who used the same native language that the government had until recently been trying to eradicate to create an unbreakable spoken code. Seems that in time of war, the oppressed may suddenly become useful and prejudices temporarily set aside.


Full Disclosure: I borrowed an electronic copy of Code Girls from my library, and received nothing from the author or the publisher in exchange for my honest review. The opinions expressed are my own and those of no one else. I am disclosing this in accordance with the Federal Trade Commission's 16 CFR, Part 255: "Guides Concerning the Use of Endorsements and Testimonials in Advertising."
book review math non-fiction women's history WWII