Anastasia Pollack’s son Alex is dating Sophie Lambert, the new kid in town. For their community service project, the high school seniors have chosen to raise money for the county food bank. Anastasia taps her craft industry contacts to donate materials for the students to make Christmas ornaments they’ll sell at the town’s annual Holiday Crafts Fair.
At the fair Anastasia meets Sophie’s father, Shane Lambert, who strikes her as a man with secrets. She also notices a woman eavesdropping on their conversation. Later that evening when the woman turns up dead, Sophie’s father is arrested for her murder.
Alex and Sophie beg Anastasia to find the real killer, but Anastasia has had her fill of dead bodies. She’s also not convinced of Shane’s innocence. Besides, she’s promised younger son Nick she’ll stop risking her life. But how can she say no to Alex? 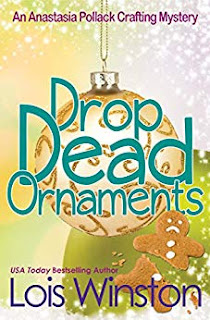 My Review:
I'll admit it: I wasn't sure about this book when I started. I definitely felt like I was jumping into the middle of something (it is, after all, the 7th in the series, and appears to start about half a day after the last book ended).  I was a little at sea... for about the first 20 pages or less. Somewhere in there, I found myself fully engaged, and zipped through the book in 2 days.

Anastasia certainly has a lot of back story that I had to pick up piecemeal (but the author provides enough of it along the way that I didn't feel hopelessly left out), and she has clearly had a hard time of it! Part of the appeal of the book is to see what horrors her mother and ex-mother-in-law will inflict on her next, and they are definitely good for some laughs even while the very serious search for a killer goes on.

The mystery was decently put together (not the best I've seen, but it works), but in many ways the corpse is an afterthought to the story about some entertaining people and their lives. That's not a criticism, by the way--that is largely as it should be in a cozy mystery. The important thing is that the author makes us care about Anastasia and her slightly crazy family.

Oh, and the "recipes" for ornaments look like they really live up to the claim that anyone can make them and make them look great. I think even I could.

My Recommendation:
A series worth checking out. I'd suggest starting at the beginning, since I did feel like I was missing some key links, but the author makes it possible to jump in anywhere.

And now--we are happy to welcome Lois Winston to The Ninja Librarian blog for a fun interview!

I like to start off talking about writing with visiting authors, since many of my readers are, like me, writers as well.

1. When did you start writing? Did you always know you wanted to be a writer, or did you stumble into it later in life?
I stumbled into writing about twenty-three years ago after having a very vivid dream. After deciding to write the dream down, the next thing I knew, I’d written 50,000 words and been permanently infected by the writing bug. Those 50,000 words, after several years and many revisions, became the basis of the second book I sold, the romantic suspense Love, Lies and a Double Shot of Deception.

2. Cozy mystery characters do some interesting things to make a living, which is part of what makes them so much fun, and leads us to learn about all sorts of things while reading them—and writing them. What’s the weirdest thing you’ve had to research for one of your books?
Because Anastasia and I have a similar professional background, it hasn’t been necessary for me to research anything in regards to her career. Most of my research has centered round police procedures, dead bodies, and ways to kill people, one of the weirder being through salt poisoning.

Researching interesting ways to kill people is definitely part of the fun!

3. What is the best thing about being a writer?
Every so often I’ll receive an email from a reader who tells me how one of my books gave her a brief, much needed escape from something going on in her life. I never expected writing a humorous cozy mystery series would impact anyone in that way. I now have a much better understanding of the power of laughter, and I’m so blessed that I’ve been able to help people through my writing.


I think we often undervalue "escape literature," as though we didn't all need to escape at times. Even light-hearted books can have a serious impact.

4. Do you draft your books longhand or compose at the keyboard?
I find the words flow better when I type them.

5. Do you use a detailed outline before you start writing, or…?
I start with just a brief idea of the story, similar to a back cover blurb. I know how the story will start and how it will end. The rest unfolds as I go along. Sometimes the plot changes if my characters refuse to listen to me and take matters into their own hands. A few of them can be very stubborn.

Thanks for sharing some about how you write. Now I'm sure my readers want to learn more about you as a person, so just a few more questions on a lighter note.

6.  If you could live anywhere in the world, where would it be?
I’ve always wanted to live in Manhattan, but given the price of real estate in New York, I’d have to win the lottery to make that dream come true.

That would be so much fun! Maybe if I could do that, I wouldn't be scared of heights anymore!

8. If there’s a spider in the corner of the room, do you a) panic, b) have to drop everything until it is removed, or c) hope it’s planning on eating the more annoying bugs that get in?
Creepy crawly things creep me out. I’d definitely drop everything to trap and dispose of that little bugger. (And I definitely hope he’d fall into the Little Bugger category and not the Big Hairy Bugger category!)

Thanks so much for coming by and answering a few questions for our readers! 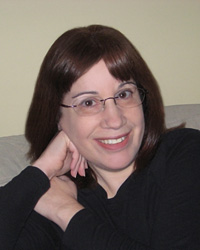